90 Years – Conservation Beyond the Zoo

This week we celebrate our 90th Birthday! To commemorate this special date, we’re sharing our conservation journey by reflecting on some of our most significant projects from the early years.

We take a look at how far we’ve come from George Mottershead’s dream of a zoo without bars, to an international conservation organisation.

By the time the zoo was 60 years old, we’d held some of the most threatened species on Earth and were engaged in the growing network of modern conservation breeding programmes. While we became increasingly involved in conservation projects around the world, a clearer picture began to emerge of the scale of the damage to global ecosystems, caused by humans.

Some of the very first Chester Zoo conservation teams decided to look beyond our gates, to protect ecosystems at home and afar, and build partnerships with the communities that live as part of these ecosystems. So where did it all begin, and where are we today? 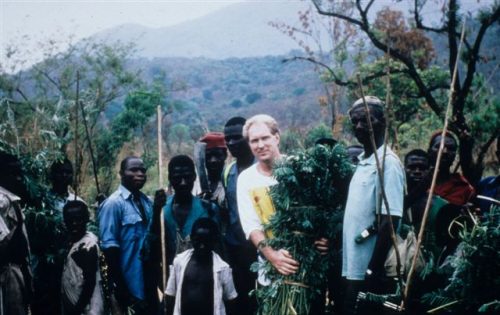 This image dates back to 1992 where Lead Curator, Gordon McGregor Reid, had journeyed to Gashaka-Gumpti National Park, Nigeria, to study the remote protected area’s freshwater ecosystem, but his trip to research fish rapidly evolved into something bigger. The 7000km2 national park is home to a bounty of primate life, including one of the most threatened chimpanzee sub-species, whom have long been threatened with wildlife poaching and continued devastation of ecosystem resources.

By 2000, we partnered with University College London and the Nigerian government to tackle these challenges. We began a quest to better understand how primate societies live and distribute through Gashaka’s mosaic of habitats, ranging from savannah to forest. This project would later be known as the Gashaka Primate Project (GPP). The GPP spawned a whole decade of conservation action, beginning with the creation of a central research station at which countless Nigerian and international researchers have completed Master’s degrees and PhD’s, whilst advancing our understanding of the park’s ecology and how best to safeguard it.

While research efforts blossomed, we began to address the human aspect of conservation in Gashaka-Gumpti, by supporting the park’s growing ranger team. The 2000’s brought new equipment, new means of transport, new tools for co-ordinated communication across the park’s scale, and new rigorous training programmes to maximise the park’s protection.

Recently we took a leading role in this project and increased the scope of activities in the region, reflected in the new name – the Chester Zoo Gashaka Biodiversity Project. Our goal was to establish long term stability for Gashaka, and now we are seeing that ambition take shape through a new partnership with the Africa Nature Investors Foundation.

Nigeria represents one of our founding field programmes, the experiences from which formed our template for much of our work around the world today: combining wildlife research and community programmes to address all angles of conservation scenarios.

From finding our feet in Africa, we then focused our attentions on the wildlife on our doorstep. Thoughts began to stew around how the broader Chester Zoo site might be developed as a haven for British native species. Our first focus, the harvest mouse, is a species with a huge distribution across Europe and Asia. However in Britain, populations have declined over the last century and are now rare outside of the Southeast.

By 2003, years of research and planning allowed for our first wildlife translocation. A carefully reared population of harvest mice were released onto Chester Zoo land, with a follow-up monitoring programme bringing together staff and volunteers from across the whole zoo in ensuring the move was a success.

Harvest mice are notoriously challenging to monitor due to their small size and elusive lifestyles. But after two decades of monitoring, findings have shown us that harvest mice are still present and active on Chester Zoo land. Earlier this year, we found a harvest mouse jaw bone during a routine examination of owl pellets across our estate – this just shows that harvest mice form part of a larger thriving UK ecosystem and over the years, that’s exactly what we’ve developed.

18 years on, a foundation single species conservation project has risen into an landscape level conservation programme, including site wide native species monitoring, and an active nature reserve that offers both a place for wildlife and the opportunity for anyone to be immersed in the nature on their doorstep.

Each of these stories has seen a field programme emerge from an ambition to conserve a species or ecosystem, but what about a project born from zoo specific expertise?

Ex-situ conservation (conservation of a species outside of it’s wild habitat) is not just limited to zoos, but also forms part of a ‘Conservation Breeding Centre’ mission. These centres, usually based in the same country as the species it aims to protect, specialise in maintaining safety net populations of threatened species through conservation breeding and supporting wild populations through reintroductions.

Wildlife in South East Asia have long felt the pressure of human development; this is especially true in the Philippines, where since the 80’s one of the region’s pioneering conservationists – William Oliver – had championed for better wildlife protection.

He was a passionate advocate of international collaboration in conservation between zoos, breeding centres and field conservation NGOs (non-governmental organisations). He firmly believed that through sharing their knowledge, both in-situ (conservation of a species inside it’s wild habitat) and ex-situ conservation would find success together. Following that vision, we began working closely with breeding centres in the Philippines around the turn of century, most notably the Bacolod City Biodiversity Conservation Centre. We’re very proud to have directly sponsored the development of breeding centre facilities over the years, and knowledge has flowed between our organisations as to how to provide the best care for some of the Philippines most threatened species – Visayan spotted deer, Visayan warty pig, and the tarictic hornbill.

Today, the legacy of William Oliver’s work is carried on by the Talarak Foundation (TFI), who not only manage multiple breeding centres, but have embarked on numerous in-situ restoration projects. Looking to the future, TFI will now seek to see wild populations of the islands’ flagship species thriving once more. We’re there supporting this work, a quarter of a century after it began.

In just a third of our lifetime, we’ve managed to reach out across the world and find partnerships with truly dedicated conservationists and communities that have stood the test of time. To find out where we’re going next, take a look at our plans for the next 10 years of Chester Zoo conservation.