Chester Zoo conservationists have conducted the first ever bio-tagging of a giant pangolin in the wild – taking a critical step towards understanding this elusive animal and helping to save it from extinction.

Chester Zoo has been working closely with the Uganda Wildlife Authority (UWA) and Rhino Fund Uganda (RFU) in Uganda to uncover new information about the extremely rare and nocturnal giant pangolin. This is the first ever study of this species in the African nation.

Despite being protected by international wildlife laws that ban their trade, pangolins are the most illegally trafficked group of mammals in the world. Their meat is considered a delicacy in many countries and their scales are widely used in traditional medicines in areas of East Asia, despite their being no medical benefit from their use. 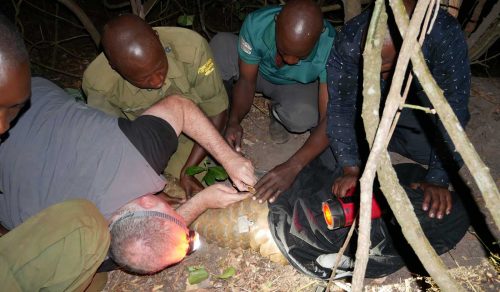 Stuart Nixon – Chester Zoo Field Programme Coordinator for Africa – was visiting our pangolin project  team in Ziwa Rhino Sanctuary, Central Uganda, when he  was alerted to the sighting of a giant pangolin in the dead of night on 25 March by RFU rangers carrying out surveillance patrols in the study area.

Stuart and the team were on the scene within 15 minutes of the alert, where the pangolin was located in a thicket.  The pangolin was  measured, sexed as female, and – most crucially – attached with a specially designed VHF radio-telemetry tag.  The pangolin, named Sungura Mwezi, ‘Rabbit Moon’ in Swahili, remained calm throughout and was safely released after ten minutes.

“For the first time, we’ve been able to track a giant pangolin, learning more about the ranging patterns and habitat use of the species. This is invaluable.  It will help us to determine key habitats, priority sites for conservation, and develop monitoring and survey techniques for the species. With no giant pangolins in zoos, all our efforts must focus on protecting conserving wild populations”

In the days following the tagging, trialling of the VHF telemetry device yielded great success. The strength of the transmitter was strong and detectable by the corresponding antenna up to 600m away.

Tracking efforts in the following days and weeks provided valuable insights into a giant pangolins movements. 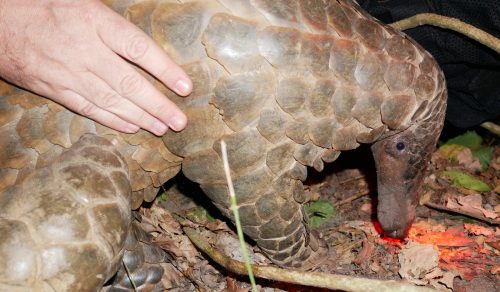 Naomi Matthews, Giant Pangolin Field Manager, was instrumental in the tagging. She told us about the significance of this event:

“Until recently very little was known about giant pangolins. It’s unusual for a mammal species of this size to remain so understudied, but it is incredibly rare and elusive making it extremely challenging to study. Fitting tracking devices to the giant pangolin has been a huge and exciting leap forward for our project and for understanding more about the species.

“By using tracking technologies we can learn more about how and where these animals are moving and how they interact with their habitats. Combining this with our camera trap research, has helped us to gain insight into how individuals are interacting with one another and with other species.

“This project is vitally important for the conservation of this species as we cannot protect something we don’t understand. The information we are gathering will feed into conservation management strategies for the species in Uganda and we hope can be applied throughout central Africa across the species range.

“We plan to use these tracking technologies on giant pangolins across multiple sites to determine how these animals are using a variety of habitats.”

This huge milestone marks just one aspect of our work in giant pangolin research. We are currently finalising three rounds of new camera trapping throughout Ziwa Rhino Sanctuary, and have discovered a further seven burrow networks used by pangolins throughout the area.

We are planning to apply what we have learnt at Ziwa Rhino Sanctuary to the wider protected area network within Uganda, as part of a national assessment of the species.