An Introduction to Chester Zoo’s Rhinos

Chester Zoo’s rhino team shared with us news of the birth of rhino calf Dakima and how their work links to the bigger picture of the European Endangered Species Breeding Programme (EEP) which is like a Europe wide dating agency.

Now rhino keepers Claire McPhee and Sarah Richardson introduce you to all of Chester Zoo’s rhinos and explain a little about the key part they play in conserving, protecting and breeding rhinos to ensure the future of this magnificent species.

Black rhinos are critically endangered. Conservation efforts have seen a gradual increase in these amazing creatures’ numbers, however due to the black market trade in rhino horn, poaching has been a constant problem for the rhinos and there are only an estimated 4860 remaining.

Chester Zoo supports several field programmes, one of which is the Chester Zoo Black Rhino Conservation Project which focuses on the eastern black rhinoceros. This sub species of rhino has been badly affected by the rise in poaching and only around 500 are left in the wild. Chester Zoo is not only trying to help save these species through its conservation work but is also helping by housing a breeding herd.

Sammy (top), 13, one of the zoo’s breeding males, was brought over from Japan in 2002 as part of the breeding programme. He brought with him a new blood line for the European herd and has since sired two calves.

Magadi (bottom), 14, another breeding male, was born at Port Lympne, arrived at the zoo in 2005 and will have sired four calves. Although Sammy is the more important male in terms of the blood line, Magadi mixes well and seems to be the females’ choice!

Kitani (left), 15, has reared one successful calf. Asani was born in 2008 and was transferred to Port Lympne in 2012 as part of the breeding programme.

She is currently paired with Sammy and we are hoping for another successful mating. Manyara (left), 14, is a non-breeding female. Both Kitani and Manyara were born at the zoo and are half-sisters.

Chanua was her second calf and was born on the 3rd October 2012 and is currently still with Ema Elsa.

Malindi (top), seven, was born at Magdeburg and arrived in the zoo in 2008. She recently gave birth to her first calf Dakima on March 7.

Zuri (bottom), six, was born at Paignton Zoo and arrived in 2011, she is due to give birth to her first calf in May.

Malindi and Zuri were both paired together before being introduced to the male Magadi, who is the sire of both of their calves. (Malindi and Dakima) (Zuri)

Not only does Chester Zoo have black rhinos but it also have what we hope to become a breeding pair of Greater one-horned rhinos. The numbers were less than 200 but again conservation has played a key part in helping save and protect them. Today the numbers for these prehistoric-looking creatures have risen to around 2,600 individuals. 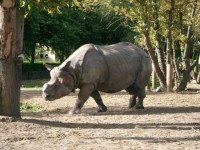 Beni, seven, was born at Munich Zoo and arrived from Plzen Zoo, Czech Republic in 2011. 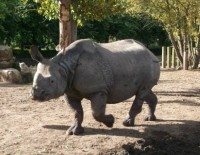 Asha, six, was born at Whipsnade and arrived in 2012. Beni and Asha are currently paired together and are getting on really well, so we hope for success in the near future.

Chester Zoo will continue to play a key role in helping to protect rhinos, whether it’s with the conservation or breeding of these magnificent species.

We are Claire McPhee and Sarah Richardson (Rhino Keepers) and we Act for Wildlife!

Find out more about the rhinos at Chester Zoo here.