This next blog is from Chester Zoo’s assistant curator of mammals, Nick Davis. He also works with our project partners Hutan; by sharing his knowledge of working with this species with the team working in the field.

My relationship with Hutan started when Marc Ancrenaz, co-director of Hutan, came to Chester Zoo to look at our orangutan enclosures and noticed the webbing materials we used within them.

The reason this caught his attention was due to the fact that the project, at the time, was making manmade bridges across waterways in the Kinabatangan region of Sabah, Borneo. The habitat there is all secondary forest – all the primary forest has disappeared as a result of past deforestation for logging and agriculture. The forest that does remain is around the Kinabatangan River and its tributaries and is very patchy.

Rivers and streams provide natural barriers that prevent the orangutans moving from one section of forest to another. Normally, with primary forests, you’d have giant trees with overhanging branches which the orangutans would use to get across, but as they’ve all gone, they’re literally stuck in these patches of forest.

So, that’s the reason why Hutan are building manmade bridges; to help the orangutans cross the water and move around the forest easier. The first bridges constructed were made using firehoses – a great material but it’s really heavy. After using this material in the past we know it’s durable and strong, but it’s not very easy to manage, especially in the rainforest – it’s not easy trying to move metres and metres of it around a dense forest when temperatures are high!

Another problem that emerged was the rising water levels during the rainy season – the boats would get tangled in the bridge as they were so heavy! So after Marc saw our webbing material and how lightweight it was, he thought it might be something the project could use for the bridges instead. 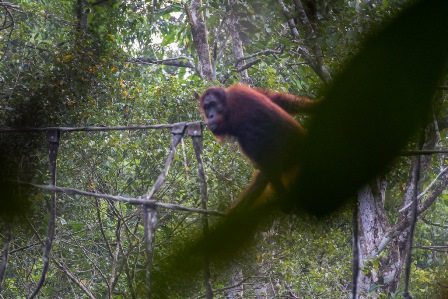 In 2011, a team of Chester Zoo staff from various departments, including the primate team, horticulture team, maintenance team and conservation team, went to Borneo to help with building new bridges using this new material. We took the webbing material and while we were there we looked at the different types, designs, styles of bridges we could build across the various tributaries. It was a successful trip and the seven new bridges we helped construct which are all still up today. In 2013 a smaller team returned again to assist in the construction of further bridges, and to install camera traps in order to gather more information on the use of these bridges.

These bridges have been used really well too by many of the primates! Within these forests there are many species of primates, not just orangutans; including long tailed macaques, langurs, gibbons and proboscis monkey to name a few. As soon as we put the bridges up, the macaques were straight on them, literally within minutes! Orangutans are naturally more nervous and wary so we didn’t witness them using the bridges while we were there.”

We’ve received reports that orangutans are using the bridges and we’ve received photos from Hutan of an orangutan using a bridge similar to those we built. It’s great to see they do work. 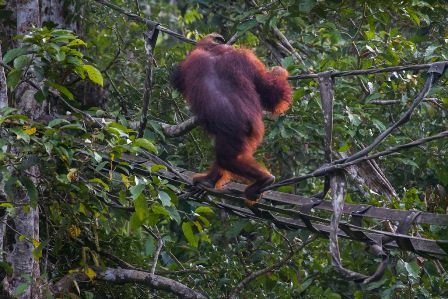 Chester Zoo supports Hutan in a number of ways through financial and technical support, and it’s vital we do whatever possible to support these amazing animals. I really enjoyed being able to get involved with directly helping the orangutans in the wild and working with our project partners. Just getting a flavour of what they do out there was an amazing experience which I could then bring back to my day to day job here at the zoo.”