Bawean Island is sovereign territory of Indonesia located 150km north of the coast of Java in the Javan Sea. The 196km2 region is a landscape of rugged terrain blanketed in various animal and plant life. What was once an island coated in forest, now bears the mark of persistent human presence, with around 25% cover remaining in fragmented pockets. What remains of the fragmented forest ecosystem is now protected to varying levels under the ‘Bawean Island Nature Reserve and Wildlife Sanctuary’.

Like many other island ecosystems around the world, the biodiversity of Bawean is rich and unique, with many species found here and nowhere else. Particularly prominent amongst this endemic cohort are the endangered Bawean warty pig (Sus verrucosus blouchi) and the critically endangered Bawean deer (Axis kuhlii). 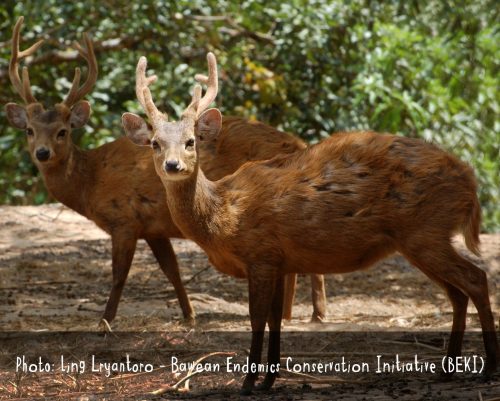 While habitat encroachment and uncontrolled use of Bawean’s natural resources are general threats to these island mammals, each species also faces its own unique challenges. The Bawean warty pig is known to roam and forage on human cropland close to the forest border, causing damage to produce.

Farmers of Bawean see this as a threat to their livelihoods and hunt the pigs in an attempt to prevent further damage. The Bawean deer population is thought to already be so small that a lack of genetic diversity could become a big problem. This is in addition to hunting and stress pressures on the deer caused by the presence of feral hunting dogs. 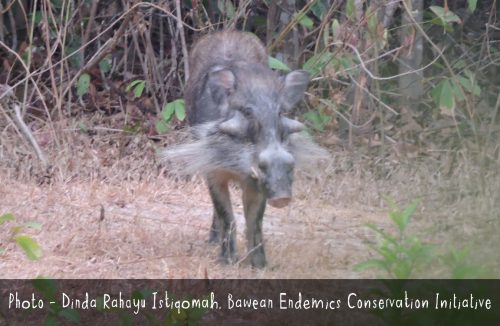 A comprehensive understanding of a species’ whereabouts, ecology and behaviour are essential if we hope to enact a conservation plan to prevent their extinction. Previously, very little had been known regarding how well Bawean’s endemic mammals are faring, with one single camera-trapping programme having taken place in early 2014.

In partnership with the Indonesian Institute for Sciences (LIPI) and Van Hall Larenstein University of Applied Science, Dr Johanna Rode-Margono sought to develop this knowledge through an ecological survey. From November 2014 to December 2015, a camera-trapping program was employed across Bawean. Camera traps were distributed randomly throughout Bawean Island’s protected areas. Over the year of their placement, 4,516 camera-trap days were accumulated with which to estimate population sizes and ecological data such as habitat preferences for both species.

In 2016, Johanna joined Chester Zoo as our Field Programme Coordinator for South East Asia, bringing this project with her. Analysis taking place here at Chester Zoo and by the co-author Mark Rademaker has ultimately produced the most up to date knowledge available regarding the status of these animals. 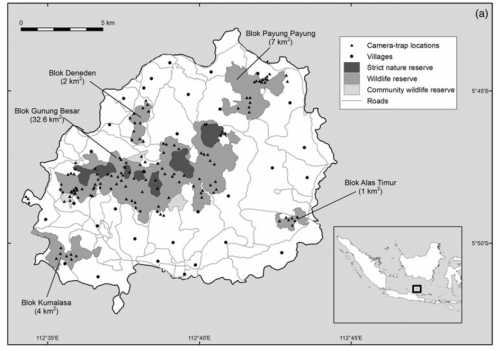 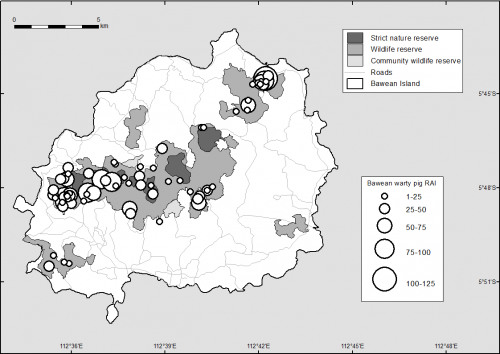 From careful analysis, it is now thought that around 350 adult Bawean warty pigs exist on Bawean. They are distributed reasonably broadly across the island, present in each of three main forest fragments, but absent in smaller pockets of jungle habitat. The pigs live in groups consisting on average of two individuals, though family groups may form when males remain with females as young arrive and grow during the dry season. The timing of camera trap records shows the pigs are most active around dawn and dusk, though it is yet to be determined what effect conflict with humans may be having on behaviour.

For the Bawean deer on the other hand, the picture we have gained is much more concerning. In the first three months of the study, across 102 fully random camera trap positions across the island, only two deer images were recorded. In the following six months with the addition of 31 further random locations, only six deer sightings occurred. Finally, with the inclusion of five non-random, preferentially located traps from August to October, 30 deer images were recorded, 27 of these from one location.

Due to the limits of the data obtained for this species, we are treating all estimates on distribution, behaviour and reproduction with great caution. Further research is required to solidify the confidence in our assumptions. With this in mind however, it is clear that the population is small and highly localised. The early 2014 camera trap study done by our colleagues has estimated that a higher number of Bawean deer exist than our more recent study suggests, which may be explained either by methodological differences, or – more concerning – a reduction in population size. For such a critically endangered species, this is an alarm that action may be necessary.

With this newfound knowledge in mind, the time is now to question what the next steps are for conservation of these precious island species.

We asked our Field Programme Coordinator for South East Asia, Dr Johanna Rode-Margono, what this work means for the future of conservation on Bawean:

“Although our study stretched over a relatively long period of 13 months, there is still the need for long-term monitoring – especially in the light of a potential population reduction. The populations are so small, that every decline needs to be detected quickly in order to act. “

“We should look at potential threats to both species, such as hunting, snaring, and feral dogs. The ecology and behaviour of the two species is also still not well known. We are planning to start a new project on the two species this year, together with the Luxemburg Natural History Museum and LIPI as our Indonesian counterpart. Hopefully this will lead to a long-term conservation and research initiative to make sure the species is safe well into the future.”