To celebrate LGBTQ+ in STEM Day, our team are sharing their first-hand accounts of entering conservation science in three different decades, and how attitudes towards their sexuality affected them,

Equality, equity and justice are essential to conservation science. Only by identifying causes of discrimination and acting to solve them can we take steps to bring a diverse collection of voices to the table. Being inclusive of all provides us with the best chance at turning around the great global problems affecting the natural balance of our world today.

A key part of this is to listen to the voices of those with lived experience of discrimination. Today is LGBTQ+ in STEM day, and we want to do more than listen, we want to amplify.

Today, three of the wonderful members of the Chester Zoo Conservation & Science team are sharing their experiences as members of the LGBTQ+ community in the scientific world, across three different decades. Take a look at the change that’s taken place across 30 years, and how we must never forget to keep challenging inequality across our greatly diverse sector.

I grew up in the 1970s and 80s which was a difficult time for LGBTQ+ people. Although decriminalised in the 1960s, homosexuality was far from accepted in society and there were no openly gay role models beyond a few brave people in industries like fashion and entertainment. Science and conservation, where my interests lay, seemed to me to be conservative and straight, certainly not an environment where it felt safe to ‘come out’ if you wanted to get on.

Then, just as I was beginning to take the first few tentative steps towards accepting my sexuality as I was about to go to University in the early 80s, the HIV/AIDS pandemic hit and attitudes were cruel and unforgiving. This terrible disease was portrayed by much of the media at the time as the ‘gay plague’ and its impact on gay men at the time was terrifying. The recent TV drama ‘It’s a sin’ portrayed the misinformation and discrimination of this time well, although unlike the characters portrayed in the programme, I wasn’t confident enough to stand up to it and I remained firmly in the closet until well after I left University.

The 1990s saw more understanding and significant changes in societal attitudes as a more rational debate ensued, and this was informed by science. A better understanding of the biological and psychological factors that influence the wonderful diversity that is human sexuality and medical breakthroughs around treatments for HIV have contributed to more enlightened views, though these were hard-won by some pretty intensive campaigning.

Like many LGBTQ+ people and their supporters I wrote to politicians and joined marches to campaign for an equal age of consent, repeal of a law that prevented schools from supporting young gay people, and for recognition in law of same-sex civil unions and, eventually, marriage. Looking back what this demonstrates is how far society really can change for the better with rational, evidence-based arguments and this has many parallels for our campaigning here at Chester Zoo on conservation and sustainability. 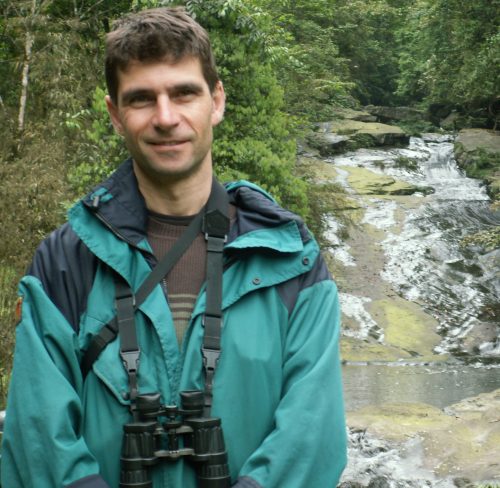 It has been exciting to live through those times and benefit from the accompanying changes in society. I came out fully in the early 1990s, met my partner and eventually, in 2010, we were able to tie the knot in a civil partnership after 18 years together.

Having had the privilege to travel extensively for my work in conservation I am often reminded how lucky we are in the UK to enjoy a more tolerant society. In so many of these places I have visited gay people remain oppressed and underground, sometimes in fear of their lives and livelihoods.

I am still fairly wary about revealing too much about my circumstances when on trips to certain countries. It is extremely frustrating that I still have to do this in 2021, but it does remind me of how far we have come here in the UK and of how fortunate I have been.

Pictured above – By the early 2000’s Simon was deeply engaged in field conservation, while attitudes in the UK were turning in favour of increased equality. 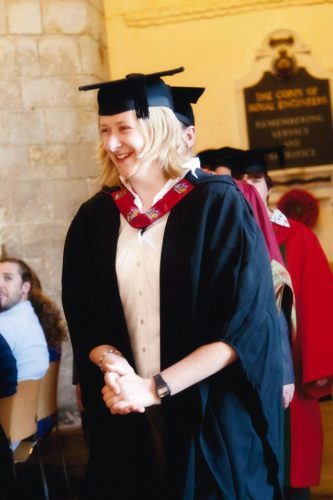 Why do we need LGBTQ+ in STEM Day? A question which I see asked every year.

Growing up in the shadow of Section 28 meant that many people now in their 30s and 40s were learning in schools where it was illegal to promote any element of LGBTQ+, and in some regions, there was no significant change until the Equality Act 2010.

That is over 30 years of impact on young people.

I consequently didn’t enjoy school life, but I stuck it out through A levels and I was lucky enough to start volunteering with a local wildlife trust. Through volunteering once a week I found something I loved and met people who had the same interests. After completing qualifications in Countryside Management and Conservation, I wanted to be able to pass on theoretical and practical skills to young people. I wanted to make a difference.

Pictured Left – When Liz graduated from University with a BSc in Animal Conservation & Biodiversity, in 2005, it would still be another 5 months before Civil Partnerships were legalised in the UK.

I started teaching STEM focused subjects in 2008. Moving into a career in teaching poses very personal questions to each individual, with many LGBTQ+ teachers being trained during the peak of Section 28. Teachers and education organisations need to reflect the whole of society, yet many LGBTQ+ education staff will still lead two separate lives. Whilst I always had great colleagues throughout my teaching career, to support me through difficult situations, not everyone is as lucky.

Now after years of navigating the science training industry, here I am today at Chester. 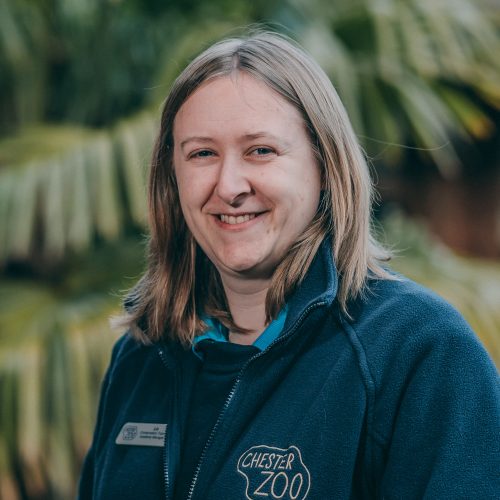 I do feel incredibly privileged to be in an inclusive organisation such as Chester Zoo. I get to work with fantastic scientists, educators and conservationists on a day-to-day basis who inspire young people with the work they do. Are there still barriers to overcome? Absolutely – not everywhere is Chester Zoo. One day it will not be a privilege to work in an inclusive organisation, it will be the norm.

Never underestimate the role you play in inspiring young people. We will be handing this planet over to the next generation, and we need to have to most effective people working to protect our world. We cannot afford to have our best scientists avoid working in STEM due to fear or lack of representation.

So did I have an LGBTQ+ hero in science growing up? No, sadly not. For me, that is why we now have LGBTQ+ in STEM Day. 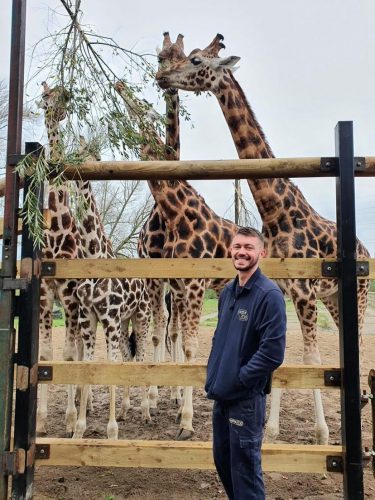 I’m Matt, one of the hoofstock keepers at Chester Zoo based on the giraffe section. I work with 14 species of all shapes and sizes, ranging from miniature pudu to the ginormous giraffe. My favourite however is the okapi, who are as fascinating as they are beautiful and have been one of the main species I have worked with over the last 4 years.

Becoming a zoo keeper takes a lot of drive and determination, with a minimum requirement of a degree level qualification in a related field of study now needed for most collections. I graduated from the University of Salford with a First Class Honours degree in ‘Wildlife Conservation with Zoo Biology’ in 2015, after completing my sandwich year at Chester Zoo.

My degree provided me with a greater understanding of the many different science and conservation roles within a zoo. As keepers we directly help the science teams in numerous ways, which can include collecting faecal samples or carrying out behaviour observations on our animals. We are also the people on the ground working directly with the animals, aiming to keep a healthy thriving population of numerous endangered species. The animals are vital to the zoo, and of course help it deliver its main roles of conservation, education and research. 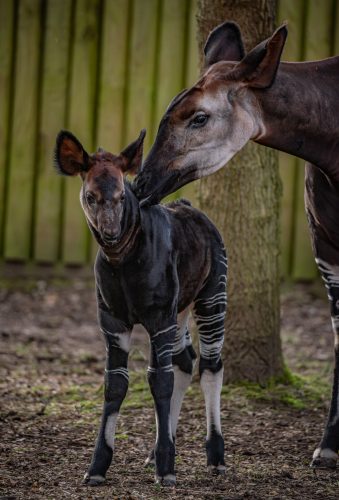 As a member of the LGBTQ+ community, I can say that the science and conservation sector I have worked in for the last 8 years has been one of the most accepting communities I have come across. People within the zoological field in general tend to be devoted, caring and selfless people – as these qualities are needed within the job role. This has meant that many of them care more about the person than their gender or sexuality and I have faced no discrimination with regards to my sexuality since I ‘came out’ in 2017. My only regret since doing it is that I didn’t do it sooner!

There seems to be a relatively good representation of LGBTQ+ people within the conservation science  industry, in varying job positions across the field. This has made my overall experience a very positive one as there is a lot of support and knowledge from those older and younger, which gave me the confidence to be myself without the worry of it affecting my career.

I feel as a whole the situation for LGBTQ+ people within the conservation science sector is a very hopeful and inclusive one. I have made many friends over the years, from those in the gay community and those who aren’t and can say it has been a very safe space for me and others to grow and progress.

I should hope this sense of community will continue in the years to come, and that people know this amazing industry we work in is as safe for the people as it is for the animals we dedicate our lives to.

Only by celebrating our diversity and challenging inequality in conservation can we ensure that all voices our heard, and therefore have the best chance of preventing extinction.

Take a look at another perspective from the Chester Zoo team.