Continuing to make a splash in Mexico

We are really proud to have been supporting a ‘Fish Ark’ conservation project in Mexico for over 10 years! Here’s an update from Dr Omar Dominguez at the Michoacán University of Saint Nicholas of Hidalgo:

“The Fish Ark is a conservation project in Central Mexico looking at 41 species of endangered, and even extinct, ‘in the wild’ Mexican fish.  Here in Central Mexico we have a particularly high number of fish species – about 100 species in total and importantly, 70% of these are endemic. We are considered by the World Conservation Monitoring Centre to be a region of special interest for the conservation of freshwater fishes.

Chester Zoo has been helping to fund the Fish Ark Project since it began in 1998, enabling us to build 130 aquariums, buy food and pond equipment and build three soil ponds. Without this support the project simply could not exist.

“However, increasingly the freshwater environments in this region are being severely altered by activities such as the introduction of exotic species and their associated parasites, pollution, water extraction, deforestation and overfishing – and these factors are all contributing to a decline in these native species. 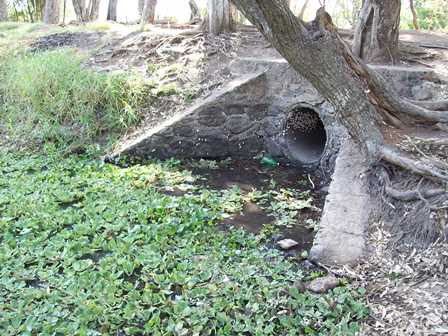 “Our project has been looking at two fish groups in Central Mexico: the goodeines and cyprinids. The goodeinae is a subfamily composed of around 41 species that have evolved over the last 16 million years; most of the goodeinae are endemic to (or found only in) our region, some are even endemic to only a small part of the river or even a single spring! This group also has very unique reproductive characteristics and is considered one of the most at-risk groups in the world.

“The cyprinid group of Central Mexico has evolved during the last 15 million years and has a high level of evolutionary distinctiveness which makes them very interesting to the programme and to our understanding. We also work with two ambystoma species (a type of salamander), which are amphibians. These two species reproduce in the larvae stage and never have a metamorphic phase; only three of the, around, 30 species of ambystoma reproduce in this way. For these reasons, conservation of these species and restoration of these freshwater ecosystems is urgent.

“The Fish Ark Project is working to prevent extinction of these species through conservation breeding; in the longer term, the project aims to help solve the wider environmental problems in the waters where the fish live in the wild. 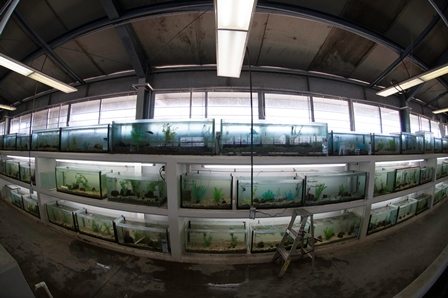 Just some of the tanks at the conservation breeding centre. Photo credit: Juan Miguel Artigas Azas

“We are working to give these endangered species the best chance to be re-introduced to the wild where they can thrive. Most of the species in the Fish Ark are highly endangered and some are now extinct in the wild; the project has already saved three endangered species and five more could be saved.

“We are also building soil pond facilities in order to maintain a big number of endangered species, but as the soil ponds are semi-captive we hope that this will make it easier to reintroduce the new populations to the wild when the time comes.”

Since writing this blog for us, Omar has been extremely busy in the field and the next update from this project brings exciting news about a new species…so, watch this space!