Data is power in the fight against illegal wildlife trade

In partnership with Taronga Zoo, San Diego Zoo and TRAFFIC (the wildlife trade monitoring network) we have launched a global campaign to help put a stop to the ruthless illegal wildlife trade – an industry which is threatening the future of many of the world’s most iconic species.

Sarah Stoner, worked for TRAFFIC as their senior crime data analyst in South East Asia, and below she tells us more about the role, why we’re encouraging you to become a wildlife witness, the reason behind the development of a Wildlife Witness smartphone app and how your support will help save wildlife.

“Data is power and my role in TRAFFIC simply couldn’t happen without it. It drives and informs our understanding of thousands of species that are endangered and threatened by persistent illegal wildlife trade.

“TRAFFIC collects a variety of information from different sources which is processed, evaluated and finally analysed to produce reports on emerging and historic illegal trade issues.

“My most recent work examined the growing threat to wildlife from trade on the internet. We know this particular trade has been growing in popularity in recent years, however, the extent to which social media is being used is a great cause for concern. This is further compounded by the suspicion that much of this activity occurs in areas online that are not accessible to the general public, such as closed Facebook groups. We undertook focused research just in Peninsular Malaysia over a five-month period to determine the level of illegal activity online; and the results were startling.”

The image below shows some of the key findings: 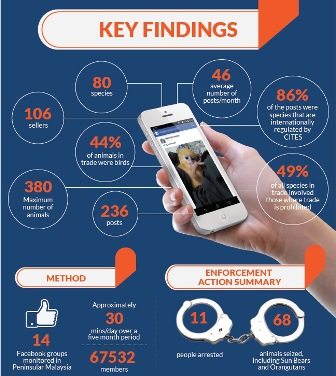 “The most revealing of all was the demand for native wild animals as pets. We unveiled a trend in the sale of high profile and threatened mammals, such as the sun bear and Sunda slow loris.

“Historically, opportunistic illegal wildlife trade posed less of a threat in Peninsular Malaysia due to the absence of physical markets. These virtual markets on social media now appear to facilitate the live animal trade in similar ways to open physical markets.

“Over the years TRAFFIC has been actively involved in the exposé of many physical market places that overtly offer illegal wildlife products for sale. Thankfully, these outlets are reducing and are not as prominent as they once were. However, it is likely that illegal wildlife trade will just be displaced elsewhere because of demand and financial gain. Both of these driving forces are often compounded by weak enforcement and/ or penalties that fail to act as any kind of deterrent. Unfortunately, this situation is not unique to Malaysia.

“In September 2014, TRAFFIC launched the Earless Monitor Lizard Report. This report is especially important as it highlights two key problems that affect and challenge much of my work as a wildlife crime analyst.

“The first is the growing and unregulated role of the internet and social networking in the trade of endangered and desirable wildlife. The second is the vulnerability of some of the world’s most enigmatic and charismatic species; traits which offer great appeal for specialist collectors around the world.

“We found that after not having been seen in trade for decades, international trade of the species was identified as occurring predominantly online. The internet, especially social networks, was found to be facilitating this trade, either directly by enabling open sale and trade exchanges, or indirectly through discussions around the species.

“We found trade present in at least eleven countries, including the US, across Europe, Japan and Indonesia, with at least one hundred individuals offered for sale. My job involves continuing to monitor this trade as it grows unabated.

“To address this growing problem and other prevalent wildlife trade issues, Taronga Zoo in Australia, partnered with TRAFFIC in South East Asia to create Wildlife Witness; a global community action tool. The Wildlife Witness smartphone app allows the public to easily report wildlife trade by taking a photo, pinning the exact location of the incident and sending relevant details to TRAFFIC.

“I then analyse reports and where appropriate, incidents are referred to enforcement agencies for action. Essentially, Wildlife Witness reports help prioritise response action by improving our understanding of illegal wildlife trade, and highlighting areas in need of increased enforcement resources. ­

“TRAFFIC is also working with a number of global partners including Chester Zoo, to promote the Wildlife Witness app. Reports made via the app are received and fed into TRAFFIC’s centralised global database. This is combined with other data and information I receive to allow me to report on chronic hotspots, transnational smuggling routes, trafficking methods, emerging species at threat and the organised criminality that facilitates trade.

“Together with sustained consumer behavioural change programmes TRAFFIC, and the global zoo community, are tackling the issue head on and working towards preventing and eradicating this damaging and unsustainable trade.”

Together we can wipe out illegal wildlife trade within our generation. Spread the word and help raise awareness. Find out more here.