A pair of endangered red panda cubs have been spotted emerging from their den for the first time!

⚠️ WE’D LIKE TO ISSUE A PUBLIC APOLOGY ⚠️

For making you watch the cutest video ever!

The rare twins – named Huo Hu, meaning ‘Firefox’, and Tiang Tang, meaning ‘Heaven’ – were born at the zoo in June this year. After staying tucked up in nest boxes for several months – with mum, Nima and dad, Koda – they have now been photographed exploring their outside habitat at the zoo. 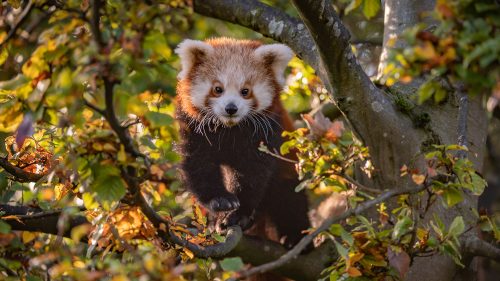 Classed by conservationists as endangered in the wild, red pandas are found in the mountainous regions of Nepal, India, Bhutan, Myanmar and southern China. Their population is estimated at fewer than 10,000 – a 40% decline in just 50 years. Our conservationists are part of a Europe-wide breeding programme for the species, aimed at boosting their population.

Red pandas are the most incredible, beautiful species, but they’re under serious threat in the wild from human activity.

“Widespread habitat destruction, trapping for the illegal pet trade and poaching for fur have led to a rapidly decreasing population. A world without red pandas is simply unthinkable, so the European breeding programme for the species is increasingly important. That’s what makes these new arrivals even more special to us.

“Thankfully, our little male Huo Hu and his sister Tiang Tang are thriving. After snuggling up in their nest boxes over summer, they’re now looking big and strong. They’re ready to explore!”

In recent years, we’ve been fighting for the future of the red panda through habitat-focused conservation projects in the Sichuan Mountains of China, where the pandas can be found among the bamboo forests.

Find out more about red pandas!