Fledgling success for one of the world’s rarest birds

A successful pairing of critically endangered rufous-headed hornbill at the Talarak Foundation has resulted in the rare arrival of a chick – the first in 9 years.

The rufous-headed hornbill (Rhabdotorrhinus waldeni), or Talarak, as it is known locally on the few Philippine islands on which it remains, is one the world’s most endangered birds. It is thought that at most only a couple of hundred individuals remain worldwide, and the species is listed as Critically Endangered by the IUCN.

On the islands of Negros and Panay, these birds were once common. Hunting for sport, poaching for the illegal wildlife trade, and the lack of mature nesting trees due to deforestation have combined driven the Rufous-headed hornbill from the island of Negros in its entirety, and reduced the Panay population dramatically, pushing the species to the brink of extinction. 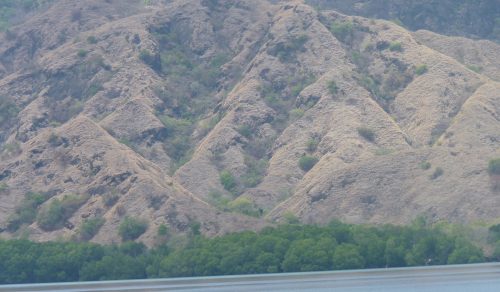 Chester Zoo works with the Talarak Foundation to prevent endemic and endangered species in the Philippines from disappearing. The organisation manages the breeding centre, Negros Forest Park that conducts conservation breeding and education campaigns, and in addition supports forest protection and reforestation across the country.

As of the end of 2018, an ex-situ population of 20 birds remained at Negros Forest Park, out of 33 ex-situ birds in collections anywhere else in the world. The other 13 are in the care of the Mari-it Conservation Centre in Panay.

The last successful breeding of rufous-headed hornbill took place 9 years ago in 2010. But why so long ago?

The highly specialised reproductive behaviour amongst hornbill species makes them incredibly challenging to breed outside of the wild. Both males and females are incredibly selective in choosing mates. They examine each other carefully and will only breed if fully compatible, forming a partnership that will last the duration of either’s lifespan. 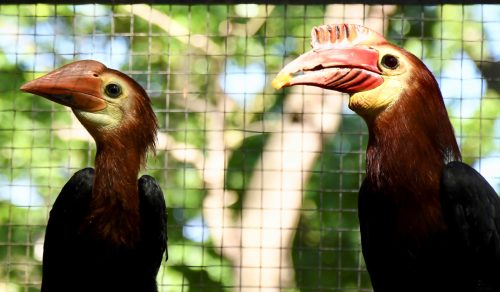 When the female is carrying fertile eggs, her instinct instructs her to find a dwelling amongst a hollow tree and begin to seal herself away. Here she will lay her clutch and await their hatching.

From this point onwards, the family is solely in the hands of the male. He will dedicate the next few months to feeding his life-partner and ensuring her safety.

It is this dedicated courtship that makes the rufous-headed hornbill so vulnerable. If a male is shot for sport or captured to be sold in the wildlife trade during this critical stage, the entire family is lost from the population.

Despite these challenges, there is still optimism that the extinction of this bird will be prevented. On January 4th 2019, a female hornbill named Ligaya began to seal herself in her nest box on site at the Talarak Foundation breeding programme facility on Negros, while her male, Kalantiw, began his watch at the entrance.

Jimmy Benzuela, Head Keeper at Negros Forest Park, spent the next 105 days tirelessly watching the health and nutrition of the family to ensure their good health, not taking a single day off during this time.

On April 14th, Valentine’s Day, an anxious waiting period came to an end as the cries of a freshly hatched rufous-headed hornbill were heard from the inside of the sealed dwelling. Two months later, a young fledgling, Valentin, emerged.

Such a breakthrough after years of trial marks renewed hope with the conservation and breeding programmes of the Philippines that these species on the brink of extinction may yet flourish.

We at Chester Zoo hope that our partners will continue to see great successes, and with the help of our supporters will continue to work against the factors causing the decline of these precious animals and other endangered species in South East Asia.

YOU CAN HELP US STOP ILLEGAL WILDLIFE TRADE

Illegal wildlife trade is the greatest direct threat to the future of many of the world’s most iconic and endangered species. If you spot animals or animal items for sale that could be part of the illegal wildlife trade, then you can make a real difference to animals by reporting what you find.

FIND OUT HOW TO REPORT ILLEGAL WILDLIFE TRADE