Getting close to the largest reptilian on the planet

Coming face to face with the world’s largest reptilian isn’t everyone’s cup of tea, but Luke Evans has been studying this species for a number of years as part of his PhD and has managed to get pretty close to understand more about these incredible animals. Discover more about this crocodile project, supported by Chester Zoo, below:

Saltwater, or estuarine, crocodiles can be found in rivers and swamps but with the increase in palm oil plantations, and other changes to the environment, their habitat has become quite fragmented. As a result of this the overall amounts of prey available for the crocodile species has decreased considerably, which has led to an increase in human-crocodile conflict in areas that are close to plantations.

Luke Evans is studying crocodiles at Danau Girang Field Centre in Sabah and, to gather data for his research, has been learning to fly a conservation drone (a remote controlled plane) which has a digital camera attached to take photos of the landscape below.

Crocodile nests are often found in open areas as sunlight can help to regulate the internal nest temperature. This means that droning is the perfect way to find them as they can be seen easily from above!

Luke has been flying different missions in various areas of the Kinabatangan looking for evidence of crocodile nests. The first missions were a huge success and potential crocodile nests were found and investigated. This could not have been done without the help of the drone as the nests are often found in swampy areas with high vegetation, so could not be seen from ground level unless you knew where to look! 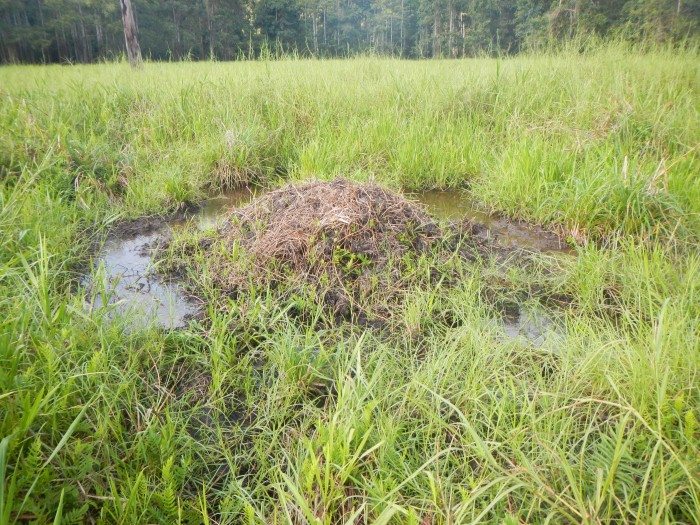 The first site that was investigated was a crocodile nest, and a video camera trap was set up near it to try and catch the mother crocodile returning. But unfortunately there were no signs of her returning.

Not only does the drone help us find crocodile nests, the pictures can also be stitched together and create an up-to-date image of the landscape below, allowing views of the areas along the Kinabatangan river which can be used for multiple conservation projects. Luke’s research aims to find out how the changing landscape, as a result of the increase in palm oil plantations, in this region is impacting the nesting behaviours of the saltwater crocodile.

The results from the research Luke and the team carried out have recently been published,  which can be found here.

The drones the team used improved on previous research techniques and enabled them to pin-point and map crocodile nesting sites. This mapping can help to prevent human-wildlife conflict with the crocodiles in areas where their habitat has become increasingly fragmented by oil palm plantations and their nests are close to local villages.

Luke’s research also discovered that the female saltwater crocodiles don’t seem to re-use their nest from one year to the next, suggesting that they either don’t nest on an annual basis or actually search for new sites each year – or both could be true, every time a female nests she chooses a new site.