This long-term ecological study aims to investigate the ecology and biology of the species and understand its function in the ecosystem.

The project was first initiated in the Brazilian Pantanal, expanding to the Cerrado in 2015. The project uses a variety of methods to obtain information on these elusive animals, including radio tracking, camera trap monitoring, burrow surveys and resource mapping.

The project has documented the important role of giant armadillos as ecosystem engineers, established home ranges for 10 individuals and collected information on health, diet, reproduction and communication. 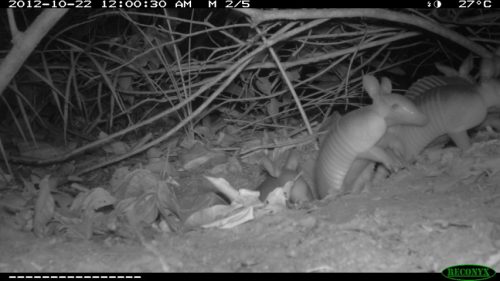 Although the primary focus of the project is on the giant armadillo, it also encompasses other species. An epidemiological study of the four other species of armadillos is currently underway to assess the prevalence of diseases which are of importance to human health. An ecological study of giant anteaters is also being conducted to obtain information for a comparative study with giant armadillos and provide baseline information on their behaviour.