We follow Indali’s journey on the road to recovery, after being diagnosed with early stages of EEHV (Elephant Endotheliotropic Herpesvirus).

Indali continues to look well and seems to be enjoying being outside in the sunshine, playing with her little brother, Anjan. She’s still being monitored very closely but, as each day passes, we’re ever more hopeful that she’s on the road to recovery. 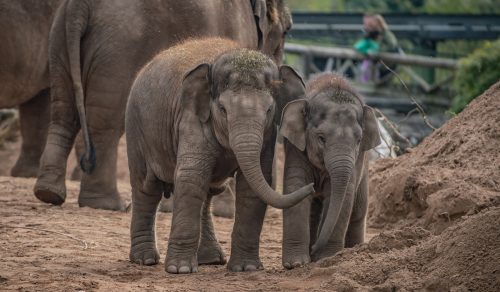 It has been nine days since conservationists first made an early detection of EEHV in Indali Hi Way’s blood tests. Experts continue to provide daily intensive care for the two-year-old calf.

The latest blood sample results give some cause to be cautiously optimistic as detailed analysis, carried out by world EEHV expert Akbar Dastjerdi of the Animal and Plant Health Agency (APHA), shows that the levels of the virus in her bloodstream have dropped in recent days, which may be good news. During the onset of EEHV elephant calves become seriously dehydrated, however, Indali is keeping well hydrated, still eating and drinking regularly as well as spending time with her mum, Sundara.

Indali’s disease continues to be life-threatening though, and the teams are still regularly treating Indali with immune boosting drugs, anti-viral drugs, blood plasma and fluid therapy. EEHV is an incredibly fast-acting and destructive virus which normally takes hold of a young elephant calf within days. The fact that Indali has been fighting the virus for nine days is providing hope that the new detection methods and treatments available are giving much better chances of helping Indali pull through. This is currently unchartered territory as we have never treated an elephant calf for this length of time before, and experts remain optimistic that Indali can fight off the virus.

The Hi Way family herd remain inside the zoo’s Elephants of the Asian Forest habitat – which is closed to public during this time – to ensure Indali is as comfortable as possible whilst undergoing treatment. 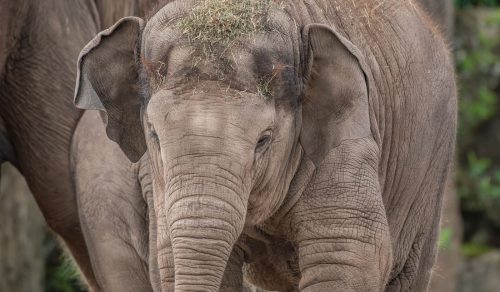 Experts have worked tirelessly over the past five days, and continue to do so, making sure she receives the best possible care.

Indali is showing some symptoms but has responded well to the range of treatments provided to her so far. Calves can become seriously dehydrated very quickly following the onset of EEHV. However, keepers, vets and scientists say that Indali remains well hydrated with high levels of oxygen in her bloodstream – a positive sign.

We remain hopeful that we can help pull Indali through.

Indali, who spent the night side by side with mum Sundara as she normally would, has responded well to treatments so far.

Elephant experts, vets and scientists are all caring for her very closely – in the zoo’s Elephants of the Asian Forest habitat – and remain hopeful that she can pull through after the virus was detected much earlier than ever before.

Indali is proving to be a real little fighter and the zoo’s team will continue to do absolutely everything possible to give her the very best chance of overcoming this devastating disease.

Indali has shown no outward signs of illness or symptoms, indicating that the test result from the zoo’s new on-site research facility has detected the virus at the earliest possible moment.

EEHV is a virus which usually proves deadly, both in zoos and the wild, but no calf has ever had a better chance of surviving this virus than Indali does right now.

Elephant experts, conservationists, scientists and veterinary teams at the zoo are working tirelessly to provide Indali with the very latest treatments available, including new state-of-the-art blood plasma transfusions, anti-viral medications and immune boosting treatments similar to that received by humans during cancer care. The teams are monitoring the calf around the clock. 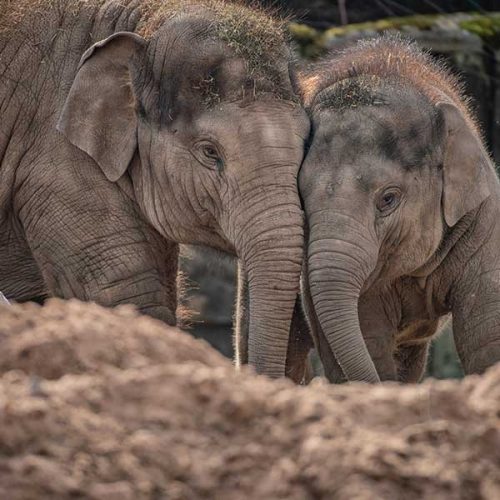 The zoo is leading global efforts to find a vaccine for the disease, and is backed by new technology and science, developed following the tragic losses of other calves at the zoo to the complex virus.

EEHV is known to be present in almost all Asian elephants, but only develops into an illness in some animals – it is currently unknown why this is. The virus has led to deaths in eight countries across the Asian elephant’s wild range including India, Sri Lanka, Nepal, Thailand, Cambodia, Laos, Indonesia (Sumatra & Borneo) and Myanmar – as well as cases recorded in zoos and sanctuaries.

The virus is now one of the biggest threats to the long-term future of Asian elephants globally. Huge progress has been made in the fight to find a cure – with new potential vaccines being trialled in the near future that could solve the crisis for the species – but right now that battle is ongoing.

Our teams will continue to work around the clock to give Indali every possible chance of pulling through from this awful virus using the very latest, innovative treatments we’ve developed. We were able to detect the virus at the earliest possible moment in our on-site science centre, where we analyse blood samples from the elephants and are able to pick up the virus as soon as it becomes active in the bloodstream.

“Although it was such early stages and Indali looked happy in herself, we couldn’t take any risks due to the fast-acting nature of the virus and began treatment immediately; administering anti-viral drugs, as well as flushing her system with blood plasma from an elephant with a perfect blood type match.

“Whenever this deadly virus strikes, the odds are stacked against us, but we have never been more hopeful that we can win the battle against EEHV.”

Chester Zoo scientists – backed by more than £220,000 of public donations, support from the Animal and Plant Health Agency (APHA), a major partnership with The University of Surrey, and an international collaboration of conservationists – are at the forefront of the major international effort, which is critical to protect both wild and zoo elephant herds globally from the virus. Find out more information about how we’re battling EEHV here. For frequently asked questions about EEHV follow this link.