International Tiger Day – what’s it like to live alongside tigers?

We’re celebrating International Tiger Day by sharing some of the stories from our Living with Tigers project in Nepal which is working to support human-wildlife coexistence.

Amy Fitzmaurice, Project Officer for Living with Tigers, and Field Coordinators Prakash Chapagain and Prabin Poudel from Nepal, tell us more about the past three years and how the project has been working to reduce conflict between people and tigers. 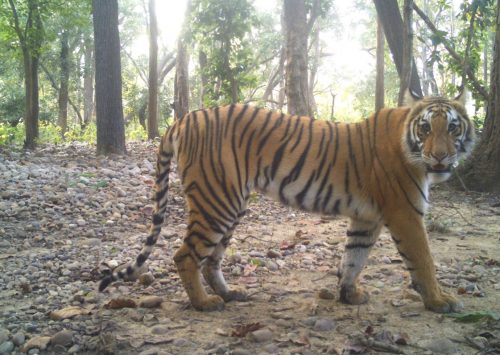 “Over the last three years of working on the Living with Tigers project, I have spent my time immersed in the rich ecosystems of Bardia and Chitwan National Park in Nepal, incredibly valuable for their unique biodiversity. The project worked to protect tigers by reducing conflict between tigers and people that live near these National Parks. In the last 20 years, the human population in the region has increased by 80% and people often go into the forests to collect firewood for cooking and so sell to make a living.

“As humans move further into the forest, the predators that share this home have less and less space in which to hunt for their food.

“I first started working to protect tigers because they are such powerful and playful animals and are under so much threat from people. Tigers, alongside Nepal’s leopards, when stricken with hunger have no qualms in taking an easy picking from a villager’s livestock, but must then face the repercussions from a community that is reliant on animals such as goats to prosper and survive.

“The Living with Tigers project team recognised from the start that working with and supporting human communities in Nepal is the only answer to helping people and wildlife to coexist safely together. It’s been a privilege to collaborate with dedicated and talented groups on this project – Green Governance Nepal, National Trust for Nature Conservation, and the Nepalese Government itself – with the backing of UK overseas funding from the Darwin Initiative and Chester Zoo.

“I have really enjoyed living with people in the communities living around National Parks where tigers live and how kind they were to involve me in their lives. After many months of research, planning, and community engagement, I’m seeing first-hand just what a community-focused project can achieve.

The woman pictured here poses next to her fortified livestock area near her home in Bardia National Park. Reliant on her goats for money and survival, she has seen hardship in recent years as her animals are taken by tigers and leopards.

She is a recipient of a Living with Tigers predator proof pen, an enclosure designed specifically to prevent access to the forest’s great cats.

Since its installation, we have seen goat losses to predation drop to zero, and her ability to sell more than double. A single adult goat carries the same worth as the cost of building a predator proof pen.

Bindu (left) and Gokul (right) own a livestock shed for their cattle. Alongside the addition of a stall for more efficient and hygienic feeding, our project has provided a new innovation for fuel production.

A newly installed drain collects dung and waste, funnelling it into the tank of the biogas producer. The system collects the gasses of the decaying livestock waste, which can be burnt as fuel for day-to-day jobs such as cooking.

“We no longer need to collect fuelwood for the forests, we have gas for ourselves and our family.”

Prakash stands here in front of his predator proof pen provided by the Living with Tigers project. Inside is a breed of billy goat tailored for agriculture and breeding.

These goats form a farming group for a community-wide farming system that benefits more than 100 participants. Each has taken part in a goat farming workshop, and has access to the breeding goats at 25% of the market rate.

Prakash sees no financial benefit from offering this, preferring to offer this system for the benefit of all.

Janika Tharu is a single mother who lost her husband to illness at an early age. The responsibility of her children’s education, wellbeing and survival lie solely on her shoulders. 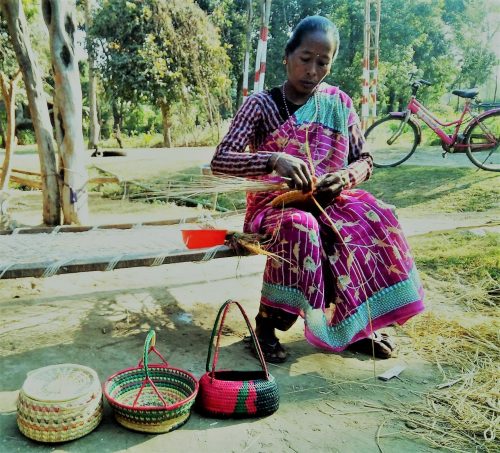 Across the world, single mothers face great challenges in providing care for their children on a limited income. The project aims to provide economic opportunity to support these women, through training in crafts.

“When I participated in the traditional handicraft training organised by Living with Tigers, I got the opportunity to learn how to make traditional Dhakiya, Gori commercially using different material and making different designs. The handicrafts I make are sold by Janaknagar Homestay. Due to this natural materials-based handicraft, I have received much needed ease in my daily life. I have received 2530 Nepalese rupees from selling these handicrafts which has helped me to support my children’s education.”

Across each of these stories the theme is the same. Poverty and lack of opportunity cause a dependence on the forest, and it is this dependence that is bringing people and the predatory cats of Nepal into conflict.

Through reducing predation, providing economic and subsistence alternatives through handicraft and fuel producing, and encouraging communities to cooperate for better farming potential each contribute to a community with a better wellbeing.  Ultimately, these methods reduce the negative interactions between people and cats, and in doing so increases tolerance and positive attitudes towards tigers.