Javan warty pigs are characterised by three pairs of facial warts exhibited by males. The species is listed as Endangered on the IUCN Red List and the main threats it faces are habitat loss and hunting to prevent crop damage.  In addition to this, Javan warty pigs might also be threatened by hybridisation with European wild pigs which also occur on Java.

The last survey for Javan warty pigs, based on interviews with local people, has documented a 53% decline of populations in 2004. We have started a new survey in 2016 which uses camera trapping and nocturnal forest surveys to find the pigs in addition of the interviews. This new survey focusses on a selection of locations that were indicated by local communities in 2004 as still potentially containing the species. Chester Zoo has trained and employed Indonesian conservationist Shafia Zahra who is leading the surveys in the field. 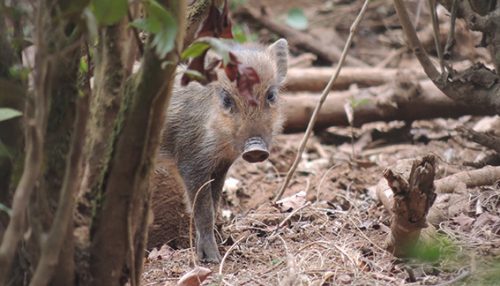 The project’s main objectives include:

Conducting a distribution survey to investigate whether Javan warty pigs are still present in these sites and in what approximate numbers by using a combination of interviews, camera trapping and reconnaissance surveys.
Assessing habitat requirements and sensitivity to human disturbance of the species, based on the habitat and disturbance assessment of each camera trap site to enable recommendations for potential reintroduction sites.
Providing data on basic ecology and behaviour from infrared camera trap videos and reconnaissance surveys to inform conservation breeding and increase knowledge of species’ biology.
Investigating human wildlife conflicts (crop-raiding by pigs, hunting and poisoning of pigs, natural resource extraction) in order to understand the characteristics and level of threats to the species.
Assessing the presence of other medium to large-sized mammal species to inform local conservation authorities of the conservation value of the site.