Madagascar- the trip of a lifetime

One of Becca’s roles at the zoo is to plan-organise and run the annual expeditions for a group of staff to a zoo supported conservation project-where they can offer practical and technical assistance in the field.

2014 the team went to Ecuador-last year a team visited our Assam Haathi Project and this year the expedition was to Madagascar!

“We initially discussed taking an expedition to Madagascar to support the work of Madagasikara Voakajy back in 2014 and to say I was keen would be an understatement! I have always wanted to visit the country because of its incredible wildlife-beautiful scenery and intriguing habitats. I was extremely excited! The main aim of the expedition was to help the field team collect data on the local population of golden mantella frogs – a gorgeous bright vivid orange frog that is listed as critically endangered by the IUCN. Other aims were to run primate and bird surveys and work with the local communities and schools.

“My job was to ensure that everything ran smoothly-from flights and travel-to ensuring the team was fully trained in frog handling and outdoor first aid in case of emergencies-to making sure we had all the equipment and facilities we needed whilst we were out there from tents to long drops…essentially I had to make sure everyone got there and back safely – and that we did a good job!

“So as you can imagine there was a lot of preparation to be done but luckily the team was massively enthusiastic-helpful and raring to go! Half the team was selected to provide skills needed for the technical element of the expedition-for example Pip one of our herp keepers who could delicately mark the wild frogs. The other half of the team were selected at random-by drawing names out of a hat! This was awesome as it gave all staff from all departments a chance to come and get some practical field conservation experience. We had about 70 people put their name in the hat and drew out five. Obviously those five were over the moon to join the expedition team-they included staff such as Reu who normally works within our memberships and adoptions team. 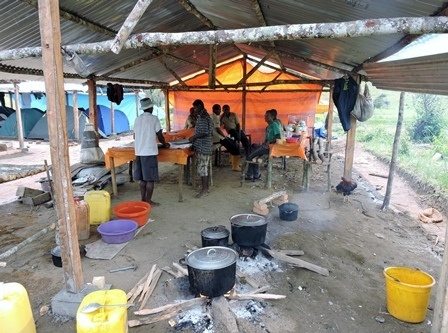 “As well as the preparation beforehand-there was a lot of organisation to be done during the expedition-just getting the team from Chester to Managbe forest there was quite a hefty task! We travelled by minibus-plane-4×4 and finally boat to get ourselves and our 21 kit bags weighing 23kg each-to our final destination – and then breathed a sigh of relief! Once we were in the forest it was time to start the serious work-we spent the afternoon setting up our tents and exploring the area. Luckily the field team had set up camp before we arrived-complete with dining room (a log bench)-kitchen (two fires and a washing up bowl)-lounge (chairs under a tin roof) and two bathrooms (squishy mud brick cubicles with holes in the floor and barrels of rainwater outside). We were ready to go!

“The next morning we headed out in our sub groups to start the survey work-and that was routine for the next seven days. It was hard. I was helping with the frog surveys and school sessions-our mornings consisted of long treks through the dense forest to the breeding ponds-measuring-weighing and recording information from A LOT of frogs-then trekking to the schools in the afternoon to meet with the communities. This was perhaps made harder by the fact we didn’t get a huge amount of sleep because it was actually very cold at night in the tents-despite reaching temperatures of 45°C during the day! Each team worked really hard to collect all the data we needed-which would have taken the field team well over a month to do by themselves. 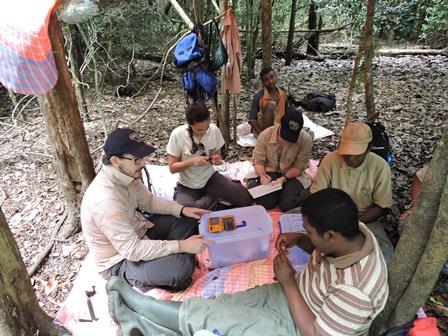 However hard-the time in the forest was fantastic-incredible wildlife was everywhere – you could walk through the forest and find different species of chameleons-geckos-snakes-frogs-spiders all just chilling by the side of the path. There was something amazing to see EVERYWHERE.

“We were all sad to be leaving camp after seven days-but at the same time exhausted and looking forward to eating something other than rice! Our journey back to the half way point town Moramanga-before traveling back to Antananarivo to fly home-was tough! A one and a half hour journey took nearly four – our 4×4 spent most of that stuck in the red sticky clay mud or ice-skating on top of it! This unfortunately meant we were late for the school visit that morning – but were gratefully welcomed anyway  – despite not looking or smelling too fresh after being in the forest for seven days!

“The class we were with (70 children) were lovely-smiley-happy and so well behaved-we spent the afternoon teaching them about what Chester Zoo does-the conservation we support around the globe-and why they should care about their little orange frog. That really is the key thing here. I feel I did my job i.e. we all got there and back safely and soundly-but more importantly we were able to collect some really important information on not only the frogs but the other biodiversity of the Managbe forest-and the more information we have about this biodiversity-the better equip we are to protect it.”