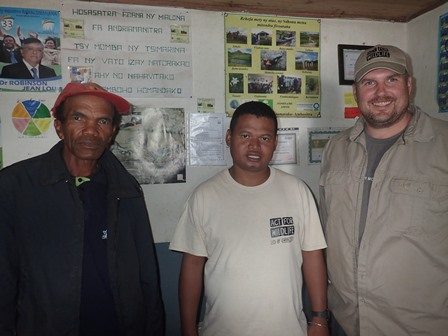 Ben Baker (right) with members of the MaVoa team

As well as working closely with Chester Zoo conservation scholar-Luiza Passos-on her research with golden mantellas-Ben has also been working closely on the long-term frog surveys being carried out in the Mangabe forest over a two year period; activities that the Chester Zoo expedition team also contributed towards earlier this year.

Each golden mantella study has three periods: we monitor the frogs in November-then again in January (which is breeding season) and again in March. This has been done over a couple of years in order to build up a solid base of data.

Here Ben tells us more about his last visit to Madagascar which took place last year:

“Back in 2013-Chester Zoo began a research project into the effectiveness of elastomer marking techniques for identification in golden mantellas (basically tiny silicone tattoos).

“This initially started by marking ten and two months later-with no signs of problems arising-we began to mark the remaining 60! Over the following year-we monitored them to see if the elastomer marking had affected their breeding capabilities-their ability to hunt and their movements within their enclosures as well as our ability to identify the different batches of marked frogs.

“The reason for all this monitoring was to make sure we knew the limitations of the marking before it was used on wild populations. The technique would be being used in Madagascar with one of the last remaining populations of golden mantellas. The resulting study would help us make informed decisions as to possible sites for translocations of frogs from threatened habitats.

“Our study population of mantella is found in the Mangabe forest. At the beginning of 2015-very early in the morning-I began my journey to assist Madagasikara Voakajy’s (MaVoa) herpetology team with the second survey of the area focussing specifically on four breeding ponds.

“The trip started slowly and 11 hours later I arrived at Antananrivo airport and along with Luiza Passos. Waking up at 7am the following day I was greeted with bright sun streaming through the shutters and what looked like an amazing first day in Madagascar. Packing up-we headed across town for a planning meeting at the MaVoa offices before preparing for our drive into Mangabe forest.

“About 30mins into the drive-we were faced with our first logistical issue; a broken down truck blocking the road…from this point on we had to walk. After a further two hours trekking we reached our destination-next to a large river away from the forest. Here we set up camp for the next 11 nights. Just before our tents were properly erected it began to rain-heavily. And it rained solidly for the following twelve hours; so hard that when we woke up the following day the river was considerably higher!

“Waking up with the sunrise at 5.30am was to become the standard. This would be followed by putting on slightly damp clothes before enjoying a hearty breakfast of rice…lots of rice. Sometimes with small dead mosquito fish and snails on it (my least favourite meal of the trip).

“With breakfast over we would then trek to the study site. On the first day this was Bejofo pond in Mangabe forest. Even whilst walking along the ‘road’ towards the forest-we had started to see golden mantellas hopping across the path and foraging for food.  Once we got to the pond the noise of mantellas calling was everywhere and the frogs were easily visible amongst the leaf litter around the pond.

“There were even tadpoles in the pond and the tributaries that fed to it. We setup up a makeshift base and the guides and MaVoa team started to collect frogs from the transects established in November 2014. These were then brought to the base and we started checking them for existing elastomer markings from the November trip-as well as taking morphometric data (weight-length etc) and then marking any animals with no marker – this time in a different leg and with a different colour.”