“Having trekked out of Mangabe forest-we were met by Ta one of Madagasikara Voakajy’s (MaVoa) 4×4 drivers who was going to be my travelling buddy for the next part of my trip. We loaded our gear into his sparkly clean vehicle and set off to return to Moramanga with the team…and four chickens!

“After a very bumpy hour we were back at the MaVoa office in Moramanga. Here we said goodbye to the Mangabe field team and Luiza as Ta and I headed off to the Project Mitsinjo field station.

“Here-a population of 300 plus golden mantellas are maintained having been rescued from the site of the Ambatovy mine prior to its operation. These frogs are intended to be maintained for three to five years whilst a new habitat is identified and given a protected status.

“The work in Mangabe forest is helping us identify key features about mantella habitat to help with the identification of a possible mitigation site for these homeless frogs. Our job for the next few days was to liaise with the team in Mitsinjo-exchange experiences of golden mantella husbandry and collect data relating to the health and suitability of the frogs for release. This data would then be compared to the data collected in Managbe as well as zoo populations in the UK-including Chester Zoo’s large population of frogs.

“That evening we returned to the hotel before setting out on a night walk with an official National Park guide-the tour takes place along the main road as access to the park at night is forbidden-however part way along the road is a free orchid garden and here you can walk through the forest edge spotlighting the nocturnally active wildlife. Here we saw sleeping chameleons-frogs and geckos as well as the tell-tale eye shine of distant lemurs.

“As we were about to finish the walk-the guide spotted four eyes high above us and when the lights were focused in the right place-a pair of crossleys furry eared dwarf lemurs came into view. My first-and as it turned out only-lemurs I saw in Madagascar (unlike the Chester Zoo Madagascar expedition team)!

“We rose early the next day to begin work at the Mitsinjo frog facility. We processed around fifty frogs which were a combination of those collected from the mine site and frogs bred and reared in the facility.

“The following day I was to join up with Christian from MaVoa to visit the site of the second species of mantella the zoo is helping to protect: the harlequin mantella.” 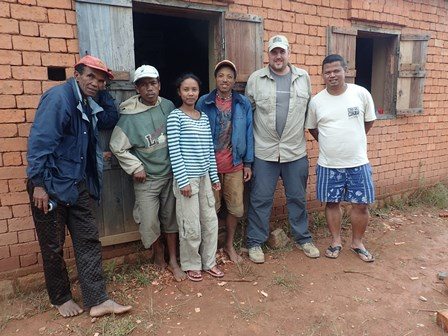 Find out more about the harlequin mantella and the work we’re doing with MaVoa by reading the final part of ‘Mangabe or bust’ on our blog tomorrow.