Only a small number of mountain chicken frogs remain on just two islands, Dominica and Montserrat. On the island of Montserrat there are just two individuals left – one male and one female. A field trip to reunite these two remaining wild mountain chicken frogs recently took place, and Katy Upton, Chester Zoo’s lower vertebrates and invertebrates curatorial assistant, was one of the team members. Here she tells us more about their mission:

“I landed in Montserrat at around 6pm on a warm humid evening where I was met by Jeff Dawson, Durrell’s Amphibian Programme Manager, who took me to my guest house. That first drive along winding roads, navigating steep sided ghauts (a deep valley between two mountains) with an overwhelming smell of mangos was a sensory overload and something I will never forget! Montserrat is a magical place, untouched by tourism, with perfect Caribbean weather yet in the shadow of an active volcano which years before destroyed the old capital city. After that first night’s sleep I was ready to get out in the field, and find the frogs.

The aim of this trip was to translocate the last female mountain chicken on Montserrat into the range of the last male.

“In the start of June this year, these two remaining frogs were found; after nearly a year of no sightings. Although this was great news, the frogs had been sighted at totally separate locations so the next step was to move them together. I joined colleagues from Durrell (Jeff Dawson), ZSL (Luke Harding & Stephanie Jayson) and the Montserrat Department of Environment (Blacka & Lloydie) to make this translocation a reality…

“I am pretty sure I was the good luck charm they needed as on my very first night, we found both frogs! Jeff had been there nine days and Luke a few days searching every night.  It was a very long hike into the start of Fairy Walk; the ghaut where the last two frogs live which coincidently is within the volcano exclusion zone. That first walk into Fairy Walk was exhausting, navigating steep sided ghauts, avoiding donkeys – yes donkeys – and dealing with the heat and humidity was not easy but totally worth it. We needed to wait until total darkness which adds another element of difficulty when searching however, after only 30 minutes Blacka found the female.

It was amazing and heartbreaking to see my very first wild mountain chicken and realise quite how alone she is.

“We caught her and scanned her pit tag to ensure she was the correct frog then recorded her biometrics – weight, snout-vent length, leg length and body temperature. After this we carefully moved her, in a cloth bag to minimise stress, down to the male’s location some 700m down the ghaut.

“Once we arrived at the release site we had a quick search for the male. To search for a mountain chicken in total darkness, you look for their eye shine reflecting your torch light; a mountain chicken’s eye shine is redder than a cane toad (the only other frog you could mistake them for). I spotted quite a bit of eye shine then suddenly saw one which look different I tried to supresses my excitement as I moved closer and yes! There he was, perched a metre above the stream sitting within a clump of exposed roots. We caught him and collected the same data as the female. We then set up a small tent with a leaf litter substrate and left the two frogs within the tent for a short period of time. Eventually we slowly opened the tent and backed away to allow them to exit. We sat some way down the path to give them some space and whilst sitting in the dark we could hear them in the distance making contact calls to each other. 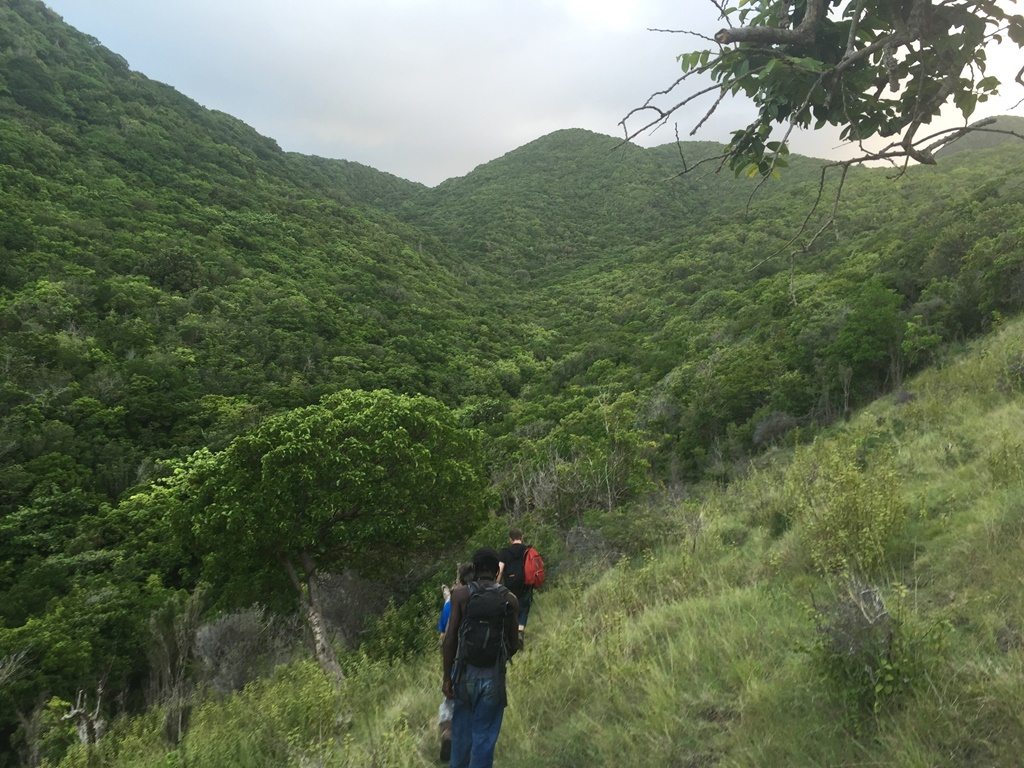 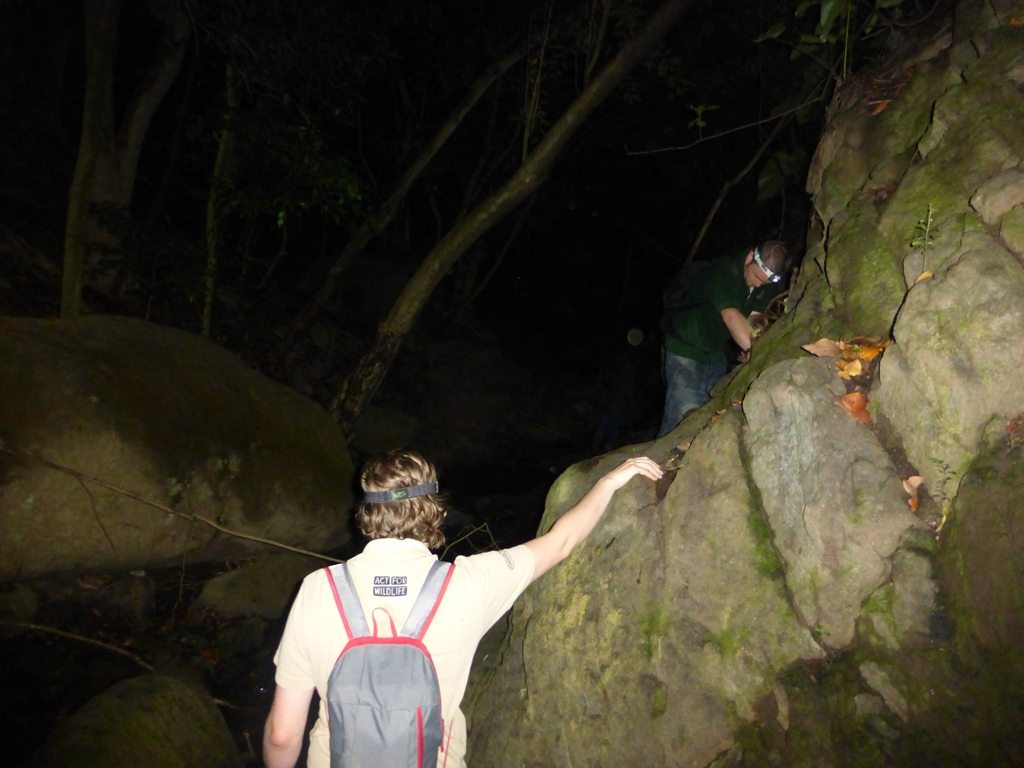 “I felt incredibly lucky and hopeful to hear the last two mountain chickens in Montserrat calling to one another.

“We snuck back to the release site 45 minutes later and we found both frogs out together sitting on the forest floor. Feeling hopeful, we packed up the equipment and left them alone.

“The very next night we were out again eager to see if the female had stayed with the male or attempted to move back to her previous territory. When we arrived at the site I decided to walk up the bank to search for the frogs as it seemed like a good place to start; turns out it was! Within a few minutes I had located the male sitting at the top, in a prime calling position. Not long after, Luke found the female about 20 meters from the male right down in the ghaut by a group of large boulders. These boulders have a great potential for egg laying sites as the frogs can excavate large chambers for nest building beneath them. It was great to find both frogs again and know the female had stayed that first night.

“We continued to monitor the frogs over the following days however we only found the male on a few occasions and didn’t see the female again. We began to worry she may have moved back to her old range so we continued searching up the ghaut and back to her original territory without any luck. Six days later, after nights which were too hot or too wet and only finding the male, we finally found her. We searched for over an hour occasionally sitting back down and waiting in the hope she would come out of hiding. We were about to give up hope when I spotted her. She was sitting in the stream right out in the open; she looked great, really healthy and obviously had no intention of leaving the area as she was less than five metres from where we originally released her!

“The next night was my final night, I was flying out the following day but I was determined to go back one last time and see the frogs! We found the male very quickly but a long search for the female proved fruitless, however, we were fairly confident she was still there (and searches since have confirmed this). It would have been nice to see her one last time, but I was happy knowing we had achieved our goal of moving these last two frogs together.

“My two weeks in Montserrat were over so quickly and I hope that one day I will return to see many mountain chickens in the forest and the sound of males calling across the valleys. But for now I will settle for one clutch of juvenile frogs, fingers crossed our matchmaking worked!” 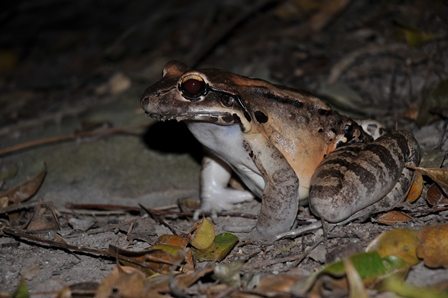 Donate to our amphibian projects and 100% of your money will be used to help save amphibians in the wild.