As most people will never get to see an orangutan in Borneo or Sumatra,  the two groups living at the zoo act as ambassadors for their species. Chester Zoo currently houses eight Sumatran Orangutans, one adult male, two adult females and their offspring.

“I’ve worked with the orangutans for the last 15 years and for my first ‘blog’ I would like to tell you a little bit about ‘Puluh’ our adult Sumatran male, who is perhaps our most impressive looking ape at the zoo.

Puluh was born in Perth Zoo, Australia in 1987 and arrived at Chester in 1996. When I started working on the Primate Section in 1998 he was a playful orangutan that hadn’t developed his cheek flanges fully. He was however mature enough to father two babies in that same year, the first Sumatran orangutans to be born at Chester for over a decade.

During this time he hadn’t quite bulked out and his two housemates Subis and Emma were of similar size. When the first infant was born we had to make the decision whether Puluh would continue to share the same area as the mothers with infants. Subis was the first to give birth and as she was the most assertive of the three, Puluh was introduced back to them a couple of weeks after Subis’s infant was born once we knew that Subis was rearing the baby ‘Jambi’ without issues.

After a few months Subis started leaving Jambi alone and wandering off a short distance away. One lunchtime (things always happen at keepers lunchtimes!) we got a call to say Puluh had hold of the baby. With heart racing I ran to the orangutan house entered the keeper area and opened up the slides to their night quarters. Emma came in, followed by Subis minus the baby. I secured the two females in one area as Puluh appeared at the slide, standing upright with Jambi lay on her back in the palm of his hand.

In those split seconds it was obvious he was uncomfortable suddenly finding himself ‘holding the baby’ and I was totally powerless as to what I could now do to retrieve the infant. Fortunately Puluh entered the night quarters and gently placed Jambi down on some bedding and retreated back into the yards. I secured the area, went into the bed area to check Jambi, breathed a sigh of relief that she was unharmed and was able to return her to Subis with no adverse effect. 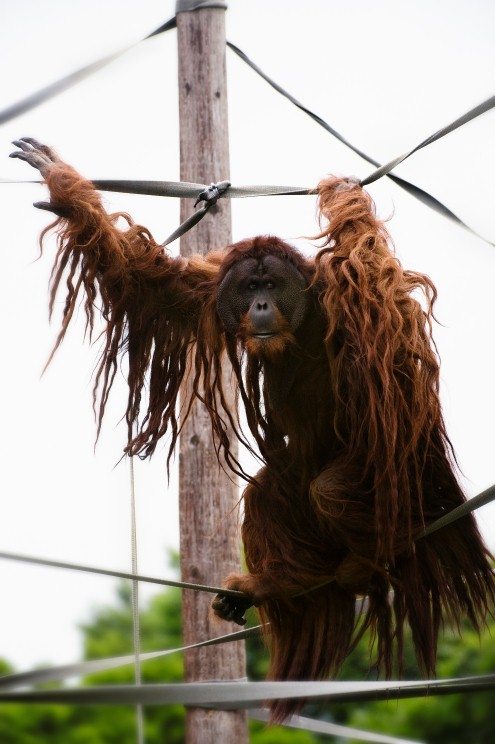 Orangutan males in the wild play no part in the rearing of infants, they do not live in social groups so interaction between adult males and infants does not really occur. Although Subis continued to put Jambi down and temporarily abandon her, Puluh had had his curiosity satisfied and left her alone.

As Puluh has grown to the majestic ape he is today, seven more of his offspring have been born. In his current home ‘Realm of the Red Ape’ we have kept all our orangutans together even as mothers are giving birth. As the babies grow and start to naturally explore their environment they encounter Puluh one on one.

Our gentle giant will hold out a finger to gentley touch them and allow them to investigate his huge hand. As their mobility and curiousness increases we have witnessed babies hanging above Puluh, happily slapping his head.

A younger Puluh would have joined in the boisterous play but our giant just sits patiently with them and quietly enjoys the attention. We our very fortunate that his non-aggressive nature means we never have to separate him from his family. Although I do feel a bit sorry for him if a gibbon, who share Realm of the Red Ape, use his head as a mid-point springboard!

A few weeks ago one of our members showed me a video (thanks Felix), it showed one of our 5 year old orangutans ‘Indah’ being chased by our resident small clawed otters in the outdoor enclosure. Indah ran to Puluh and clung to his side as she would her mother. Puluh swiped at the otter group, making them retreat back into the water. Indah climbed a pole and once safely at the top ‘kiss-squeaked’ her indignation. Puluh glared at the otters for a moment, just so they got the message, then ambled off. Job done! What a great dad! 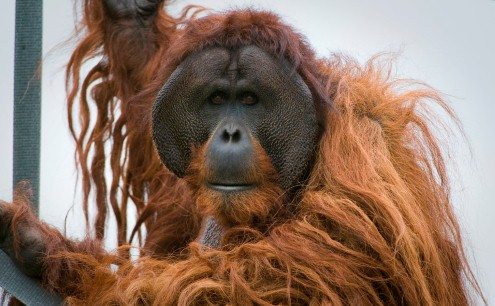 Unlike Emma and Subis, Puluh rarely sits alongside the glass where visitors look into the enclosure, preferring a quieter life away from the attention. But, despite his size, he can be spotted climbing to the top of the tallest poles to survey the neighbouring areas of the zoo, or swinging from rope to rope with his fantastic coat trailing through the air.

In 2010 we managed to weigh all our orangutans by encouraging them to climb a rope which was attached to a digital scale above their enclosure. We could finally give an answer to the commonly asked question ‘How much does he weigh?’ …the answer being 95.5kg. Subsequent ‘weigh-ins’ have been between 90kg and 96kg.

He is a lovely animal to work with, sometimes a bit difficult only due to something new being in the area, or unexpected noises that cause him to be unco-operative in moving between areas (to allow keeper access to clean). But we can let him off with that because the boy is undoubtedly a star!”

I’m Chris Yarwood and I Act For Wildlife

You can make a difference! Register for Go Orange, make a donation, or share our campaign.

Donate to our orangutan project and 100% of your money will be used to help save orangutans in the wild.

Make a single donation
Make a regular donation
£10
£20
£50
£5
£10
£20
Because Chester Zoo pays for our overheads, every penny of your donation will go towards conservation!