On the march: rare caterpillars destined for the wild

More than 150 rare caterpillars which have hatched at Chester Zoo are now destined for release into the wild in Manchester and Cheshire, where they have been extinct for a century. 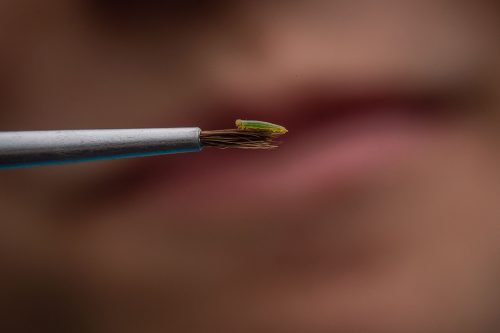 The Chester Zoo butterfly team is working to raise the caterpillars to help prevent their extinction, in partnership with the Lancashire Wildlife Trust.

Each member of the army of freshly hatched “large heath” caterpillars is currently only a couple of millimetres long.

Conservationists at the zoo have been using fine art paintbrushes to move the miniscule species into their specially designed habitats at the zoo.

The paintbrushes allow the zoo’s invertebrate keepers to be precise and delicate when handling the precious insects.

After plenty of eating and growth, the tiny youngsters will hibernate over the winter and pupate next year, emerging in the summer as large heath butterflies.These adults will be the first to return to areas that their species once called home.

Large heath butterflies were once common across the British Isles but over the last 200 years, they have been pushed further and further north. Large colonies previously at home in the boggy mosses of Manchester and Liverpool have long since been lost to local extinction.

As the UK has built its agriculture over the last two centuries, the wet mosslands that the large heath needs to survive have been drained and converted into farmland. As the land dried, the food plants for the butterfly were lost, resulting in a cascade of wildlife disappearance. 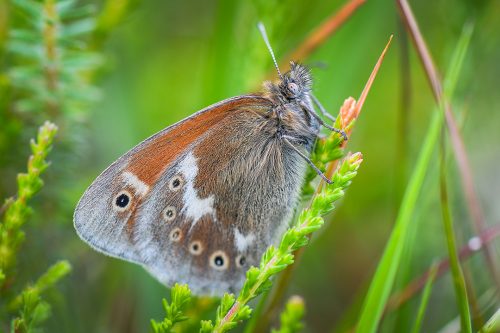 The butterfly can be identified by their orange wings, each bearing six black and white ‘eyespots’ on the underside. Conservationists hope to ensure that they will one day be a common sight across the UK once again.

“Few people realise that the butterflies we might see in our gardens, forests and mosslands across the UK are heavily under threat, with many species disappearing from their last strongholds throughout England.

“The Chester Zoo butterfly team already cares for endangered and rare invertebrates from across the world, as well as these local butterflies. We are working extremely hard to stop these species from disappearing.”

It is an amazing privilege to play a part in embarking these rare caterpillars on their journey, returning the species to their historic home.

“Although miniscule in size at the moment, we’ll watch them grow and grow in our care over the course of the year, wishing them farewell in the spring.”

The breeding programme and reintroduction forms a key part of the Lancashire Wildlife Trust led “Manchester Mosses Species Reintroduction Project”. Funded by £265,000 from Veolia and £25,000 from the Casey Group, the work is seeing a return of many long-lost plants and insects to special areas of conservation in the Manchester, Cheshire and Lancashire region.

We support conservationists and conservation projects across the United Kingdom to prevent the extinction of unique and endangered species, safeguarding diverse and healthy ecosystems.

By creating connections from one wildlife-friendly space to the next we can create wildlife highways through our neighbourhoods and protect the precious wildlife that we love.  You can make small changes that will make a BIG difference.