HOW WE USED THE MONSOON FOREST FIRE DONATIONS

Five wildlife protection projects are being created by our conservationists, thanks to money donated by the public in the wake of a fire in our Monsoon Forest at the zoo last year!

More than £260,000 was donated to the zoo after a fire broke out in our Monsoon Forest habitat, for rare South East Asian species in December 2018.

Now, conservationists at the zoo have released the first details of how these public donations will be used… 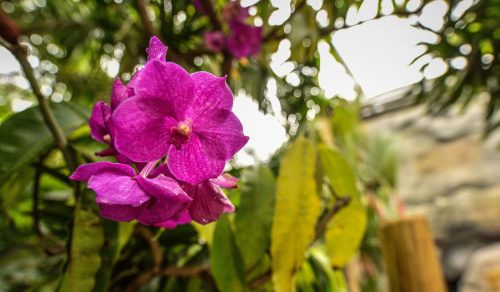 The monsoon forest fire funds will enable urgent South East Asian conservation work – both for rare species within the zoo and for wildlife on the edge of extinction in the wild. Critically endangered orangutans in Indonesia – threatened by natural forest fires that are intensified by human activities – will be the first to benefit.

By helping to fight forest fires and restore fire-damaged habitat in the Sebangau National Park, conservationists will help to safeguard the largest remaining protected population of Bornean orangutans in the world. The Monsoon Forest funds – and additional expertise from our conservation team – will support a project run in partnership with the Borneo Nature Foundation.

“Every orangutan here in the zoo was safely led away from the fire we suffered last year, but there are orangutans in the wild that are not so fortunate.

“Natural forest fires, when combined with man-made changes to the habitat in Indonesia, are causing major problems for these incredible but critically endangered primates.

“As well as providing vital equipment to help tackle out of control forest fires, the zoo will support a scheme to block ditches that were dug to drain the forest, allowing them to fill with water and re-wet the peat soil that underlies the forest. This will prevent the forest from drying out and stop uncontrolled fires that destroy the habitat for orangutans and other wildlife.”

Preventing these fires also benefits human communities living in these areas. People lose their homes and lives to the fires, while thousands of people suffer damaging health consequences from exposure to toxic haze. Urgent action will benefit both people and wildlife.

Meanwhile in Chester, the rebuilt Monsoon Forest, which is due to re-open to zoo visitors in 2020, will include enhanced habitat for critically endangered Sumatran orangutans, as well as threatened Indonesian hornbills. Specially designed adaptations will enrich the animals’ environment once they move back into their refurbished homes, boosting our conservation breeding efforts.

Our conservationists will also be delivering urgent new projects in South East Asia to prevent the extinction of the stunningly beautiful bleeding toad and one of the world’s rarest songbird species called the Barusan shama. Experts believe both of these species are likely to go extinct soon without this intervention.

The critically endangered bleeding toad is now restricted to a few tiny areas of western Java and is thought to be in imminent danger of extinction. The Monsoon Forest Conservation Fund has provided an opportunity for our conservationists and Indonesian partners to prevent this extinction. By urgently assessing the toad’s remaining population size and better understanding the threats it faces, teams can protect its remaining habitat and, if required, establish a conservation breeding programme for the species.

The critically endangered Barusan shama is a songbird found only on the Barusan islands off the western coast of Sumatra. Its population has declined severely due to habitat loss and the illegal bird trade. It is now perilously close to extinction. We will begin a conservation breeding programme, with field partners in Indonesia, to attempt to bring the species back from the brink.

Botanical conservationists at the zoo will also step up efforts to conserve some of the world’s rarest carnivorous plants. Our experts already care for a highly significant collection of the world’s rarest pitcher plants, Nepenthes, including a number of highly threatened species from South East Asia. Through the creation of new facilities for conservation research and propagation, both at the zoo and for our partners in Indonesia, the funds will enable experts to boost disappearing populations.

“Our Monsoon Forest habitat was the largest zoological building in the UK when it opened in 2016, home to a huge range of rare, threatened South East Asian wildlife. It is very fitting therefore, that as we rebuild Monsoon Forest we will also be able to deliver even more conservation work in the field; protecting species that would almost certainly go extinct without emergency intervention.

“All this is because of the generosity of the zoo’s incredible, passionate supporters. More than 8,000 people donated to the Monsoon Forest Conservation Fund last December, raising more than £260,000 for our work as a conservation charity.”

Thank you to each and every one of you; this will have a remarkable impact on wildlife conservation. Everyone who supported us is now a conservationist. Together, we can act for wildlife and prevent extinction.