Orangutans in oil palm plantations – why can’t they survive there?

It is rarely explained WHY an orangutan can’t survive and live in oil palm plantations alone, after all, it is a large area filled with trees! Our field partners over at Hutan have been carrying out research in their study sites in Sabah, Malaysian Borneo to gain a better understanding of how orangutans are adapting to these new landscapes.

Orangutans have been observed surviving in single or small patches of forest within plantations; however Hutan’s studies found evidence of starvation amongst some of these animals, alongside an increase of human-wildlife conflict within the estates. So although orangutans appear to be adapting better than expected, plantations alone are unable to sustain orangutan populations in the long-term.

Marc Ancrenaz and the HUTAN team of researchers have found that more than 300 plant species are part of the orangutan diet in the Kinabatangan forest. Fruits are favoured by the animals (especially figs, acorns and durian – considered as a treat when this fruit is available) but they also feed on leaves, barks and insects. It’s clear that orangutans need a diverse diet to survive and to remain healthy in their natural environment. However HUTAN researchers have shown that orangutans are venturing into oil palm plantations to feed on leaves of palms and on fruits. But we also noticed that most palm oil fruits were not fully digested by the animals and it is common to find un-cracked nuts in orangutan faeces. In addition, it appears that orangutans cannot survive in pure stands of palms; it would be as if people were fed with only one type of food, carrots or tomatoes for example. It is not viable in the long-term.

Orangutans have been documented walking across the forest and oil palm plantations: HUTAN led a study investigating if spending time on the ground was part of the natural behaviour of orangutans or was solely caused by habitat degradation.

The study, using camera trap pictures, found that orangutans spent more time on the ground in their natural habitat and in man-made landscape than first believed. Movement on the ground for Sumatran orangutans was found to be considerably less common than Bornean orangutans because predation by tigers becomes a large risk.

It is still unsure what distance an orangutan would be comfortable with moving around on the ground since orangutans are more adapted for swinging through the branches and can cover large areas with minimal amounts of energy being used, especially in areas where the canopy cover is dense with few gaps. However, the fact that orangutans can walk significant distances on the ground bring some hope for their dispersal abilities in human-transformed landscapes.

During a separate study, it was also found that although orangutans have been seen to create nests in oil palm trees, however HUTAN researchers have also shown that orangutans would preferentially choose to nest in non-oil palm trees. The reason why the animals prefer trees to nest is still unclear: maybe nests are more comfortable in trees than palms, or maybe the animals are less disturbed in trees. 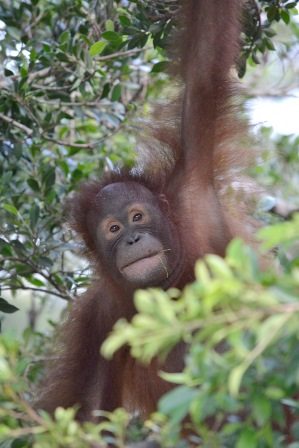 These studies which our field partners have been involved in suggest that although orangutans are beginning to adapt to the oil palm mosaic that has now taken over what was once pristine forest, they still cannot exist in the monoculture that these plantations are creating.

Access to rainforest is still essential for survival. However, there is hope: better balancing agriculture and ecological needs of wildlife offers a way forward where both human activities and animals can co-exist.

Learn more about palm oil, its impact on wildlife and what you can do to help protect animals like orangutans and other that share its rainforest habitat, here.