Last year’s pine marten translocation efforts started in early September in Scotland. This time is best for getting the martens as it’s outside the period where females have dependent young, and after the mating season that happens from July to August.


Read the previous blog update from the project here

A total of 19 adults, including ten males and nine females, were carefully health checked and selected for translocation to Wales. After being fitted with GPS collars, the pine martens travelled to their allocated release site in Wales. The soft-release pens that we designed and built were used to help the martens acclimatise to their new surroundings, and most of the animals went on to establish stable home ranges and remained within 10km of the release sites.

“I am really pleased with the continued success of the Pine Marten Recovery Project, and proud that Chester Zoo’s involvement is growing. It’s superb that zoo staff are able to help with radio tracking and develop their skills on this exciting UK native species project. The steps The Vincent Wildlife Trust are taking to monitor local views and engage local communities are extremely important too, and I hope Chester Zoo will be able to assist in this area in the future.” 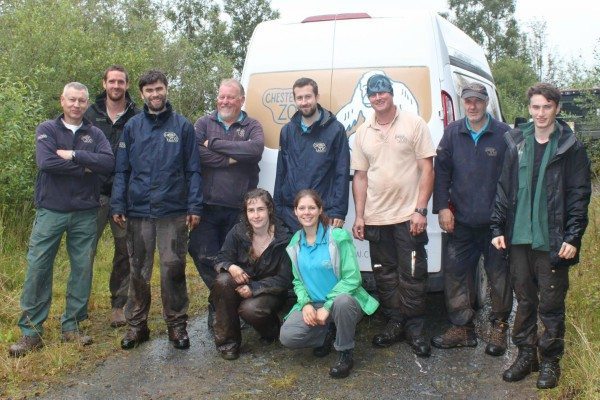 Radio tracking the individual martens to establish their home range was an important part of the project, and the radio tracking effort was intensified this spring to try to determine if any of the translocated martens (from 2015 or 2016 releases) showed signs of breeding. Breeding female martens tend to spend more time close to their den site and that behaviour can be easily picked up by radio tracking.

Dens identified as likely to be used as natal dens were checked in May and camera traps were set up around the potential sites. The Vincent Wildlife Trust identified that at least five females had successfully bred resulting in the birth of 10 Welsh-born pine marten kits in 2017. One family resulted from a mating in Wales last summer between martens released in 2015, indicating that the pine martens are settling well in their new home in Wales!

A third and final translocation is now under way to release a further 10 to 20 Scottish martens in mid-Wales. This last translocation will strengthen the founder population even further and should enable a faster spread of the newly established martens.

Another important measure of the future success of the Pine Marten Recovery Project relies heavily on the involvement of the local Welsh communities. Josie Bridges, Pine Marten Project Officer and specialist in Community Engagement is in charge of that aspect of the project. Training volunteers, Josie enables local people to become Pine Marten Champions.

“Fostering community ownership is such an important part of what we do in the Pine Marten Recovery Project. These pine martens are part of the Welsh community now and we want local people to be aware of them, help us monitor them, and benefit from their existence here.”

A camera trap loan scheme launched last year has proved very efficient in building the bridge between locals and pine martens. The scheme allows local people to put a camera trap in their garden or field, and helps the project keep up with the movements of the pine martens, whilst getting people curious about their new elusive neighbours. Some community groups have become so involved in the project that they organised a ‘name the pine marten’ competition where a marten is regularly seen!

“We want to improve and expand on the communities initial excitement at the translocation so that in 5, 10 or even 50 years’ time there will still be pine marten champions in the area to show how the pine martens have survived and thrived back in the Welsh landscape.”