The tequila splitfin, a small species of goodied fish which grows to just 70mm in length, disappeared from the wild completely in 2003 due to pollution and the introduction of invasive, exotic fish species in waters where it had previously thrived.

The combined expertise of our conservationists and a determined team at the Michoacán University of Mexico has led to more than 1500 fish being returned to springs in the Teuchitlán River in the state of Jalisco in south west Mexico.

With the fish thriving and already breeding in the river, the project has been cited as an International Union for the Conservation of Nature case study for successful global reintroductions.

“This is the first time an extinct species of fish has ever been successfully reintroduced in Mexico and so it’s a real landmark for conservation. It’s a project which has now set an important precedent for the future conservation of the many fish species in the country that are threatened or even extinct in the wild, but which rarely take our attention.”

Professor Omar Dominguez, from the Michoacán University of Mexico

“The tequila splitfin has, for many years, been used by scientists to study the evolution, biogeography and live bearing reproduction techniques of fishes and is a very important species. We could not stand back and allow it to disappear.

“Successfully reinstating this fish in the wild also offers a wider positive impact. Not only has the fish itself been saved, but the environment it lives in has been restored. The springs are now healthy and the community that lives around them can now enjoy this beautiful place again, along with all of the benefits that a healthy freshwater habitat brings.

“Meanwhile, local people, particularly schoolchildren, are fully embracing an ongoing education programme, which is changing the way that many act towards the freshwater environment that surrounds them – something that’s absolutely vital if we’re to ensure long-term change.”

In 1998, at the outset of the project, scientists at the Michoacán University of Mexico’s Aquatic Biology Unit received five pairs of fish from Chester Zoo, delivered by the English aquarist Ivan Dibble. These 10 fish founded a new colony in the universities’ laboratory, which experts there then maintained and expanded over the next 15 years.

In preparation for the reintroduction, 40 males and 40 females from the colony were released into large, artificial ponds at the university. This exposed the individuals to a semi-natural environment where the fish would encounter fluctuating resources such as prey items, potential competitors, parasites, and predators such as birds, turtles and snakes. After four years, this population was estimated to have increased to 10,000 individuals and became the source for the reintroduction to the wild. 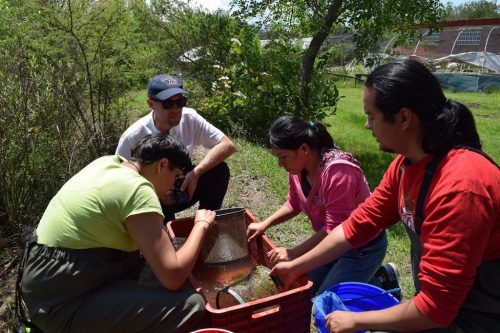 Two years of field surveys in and around the Teuchitlán River, including diversity and population studies of zooplankton, phytoplankton, invertebrates, fish and parasites, helped identify the best release sites. They also undertook education work within local communities to improve awareness of aquatic habitats and show the value of healthy water sources. A long-term monitoring programme, involving local people trained to assess water and habitat quality, was also established.

“This is an important moment in the battle for species conservation. It is a real privilege to have helped save this charismatic little fish and it just goes to show that with the skill and expertise of conservationists, and with local communities fully invested in a reintroduction project, species can make a comeback from environments where they were once lost.”

“This is also a great example of how good zoos can play a pivotal role in species conservation. Not only has Chester Zoo been involved technically and financially, the breeders, which became the founding population for the reintroduction of the tequila spitfin, originated at Chester Zoo. Without the zoo population keeping the species alive for many years, this fish would have been lost forever. It’s humbling to think that a small population, being cared for by aquarists in Chester, has now led to their revival in the wild.

“Following years of hard work by our partners at the Michoacán University of Mexico, the wild population is, thankfully, now thriving – they’re breeding naturally at a tremendous rate. It very much goes to show that animals can re-adapt to the wild when reintroduced at the right time and in the right environments. Chester Zoo’s mission is to prevent extinction and that’s exactly what we’ve done here.

“With nature declining globally at rates unprecedented in human history – and the rate of extinction accelerating – this is a rare success story. We now have a blueprint for what works in terms of recovering these delicate fish species in Mexico and already we’re onto the next one – a new rescue mission for the golden skiffia is already well underway.”

Our unusual conservation partnership with a local convent of nuns in Mexico was just the beginning of an incredible journey that would see a united front against extinction, from two corners of the world, to help save the salamander.