The southern woolly lemur (Avahi meridionalis) is endemic to the island of Madagascar. There is little known about this endangered species and so any studies around this animal and its habitat are important for the design of effective conservation measures.

Kathryn Scobie-one of the applicants of our 2014 Studentship Grants scheme spent 3 months in Sainte Luce in Madagascar working on a project around the southern woolly lemur and its habitat use and sleeping areas.

“Dusk was just beginning to fall. It was already our third day of searching but light was fading quickly and soon we would need to cut our losses-and head back to camp.

It could be a false alarm. Maybe it’s a brown lemur-or a bird. Maybe it’s nothing.
‘Fotsife!’ Woolly! Babaly pointed.
‘Telo!’ Three!

“We were 1 week into our 3 month stay in Sainte Luce-a rural village at the south eastern tip of Madagascar. Days were spent searching the surrounding littoral forests for sleeping sites of the nocturnal woolly lemur-more often crossing paths with a rambunctious troop of red-collared brown lemurs or mistaking the rustling of a paradise fly-catcher for that of our ever-elusive mark. After nightfall we would meander the forest paths-ducking beneath spiders’ webs and stumbling across the undergrowth; all the while scanning the tree-tops in the hope of catching the red glow of two eyes reflecting the light of our torches.

“On this occasion we were hoping to find a group just before nightfall-to observe them as they awoke and hopefully catch an insight into the behaviour of this secretive species. We were in luck. With only minutes of daylight left we found ourselves amongst the palms of a dried-out swamp-metres from a family of woollies. So we sat-and waited-and watched. A passing troop of brown lemurs momentarily disrupted the calm. Crashing through the trees-talking to each other with pig-like grunts-you hear them before you see them. But they weren’t interested in anything here-the woollies ignored them and they disappeared as quickly as they had arrived. 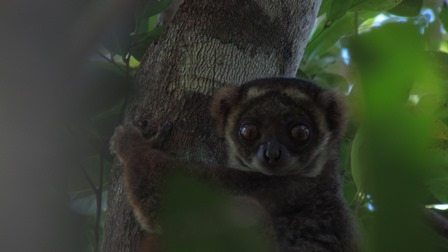 “We were sitting again amongst the quiet whirr of forest-flecked with the trill of a frog-or the ‘churrr’of a nightjar. As the last of the daylight faded-right on cue-one by one they darted. The four of us scattered-trying to keep up with the woollies-but they’d lost us.

“The southern woolly lemur (Avahi meridionalis) is threatened by the continuing decline in the area and quality of habitat within its range. The littoral forests of southeast Madagascar are severely fragmented and have been heavily impacted by human activity.

“Reclassified in 2012 from Data Deficient (DD) to Endangered (E)-the southern woolly lemur is little-studied and so information about habitat requirements and key resources such as sleeping sites are important for the design of effective conservation measures.

“The support from Chester Zoo contributed to all aspects of this project-the primary focus of which is to identify how populations of this species cope with habitat disturbance and deforestation. The Studentship Grant allowed us to purchase vital research equipment-it meant that we could hire and train local guides-and took us by air-by road and via mangrove swamp to our study sites in some of the most remote areas of rural Madagascar.

“The fieldwork phase of this project is now complete and it’s time to look at the results. From these it is hoped that we will be closer to understanding the ecology of the southern woolly lemur-so that future conservation measures can effectively target this species. Madagascar’s rainforests are growing smaller-and for now this trend does not look set to change. However-with support from organisations such as Chester Zoo-and with initiatives such as Act for Wildlife-we can ensure that the pressing need for progress is met and that we continue to make advances in the measures used in conserving Madagascar’s unique ecosystems and the fauna and flora which make them so special.”

Learn more about our Studentship Grants scheme, here. If you are interested in applying for funding to support your project the deadline for applications is Friday 13 February 2015.