Chester Zoo intern, Jack Carney, travelled out to Bermuda to assist one of our conservation scholars Helena Turner with her PhD project on the Bermuda skink. Here is what Jack got up to on his trip:

“My trip to Bermuda started with some not-so-welcoming overcast weather and a taxi driver who had no idea where he was taking me. Being stranded on the mainland was not the best start to the expedition but the trip became the stuff dreams are made of.

“I travelled to Bermuda as a field assistant to Helena Turner to help trap and survey skinks on the various islands comprising the small country. The objective was to determine presence and abundance of the endemic Bermuda skink as part of Helena’s PhD. Bermuda skinks are the only endemic fully terrestrial vertebrate found in Bermuda, making them a hugely important species of natural heritage. This grey/brown lizard’s populations are declining due to land use change, habitat destruction and effects of invasive species which predate upon or compete with the skink.

“The base of operations for the study is on Nonsuch Island in the North East. In recent times, it has been transformed into a ‘Living Museum’, giving protection to skinks and other endemic species such as the Bermuda petrel (or Cahow). Nonsuch provided living quarters and also the first opportunity to see a group of wild skinks, known as the ‘porch skinks’, that occasionally appeared to eat the scraps of cheese we left them.

“From Nonsuch, we set out to Southampton Island, which holds possibly the greatest wild population of skinks.

“We had to travel between islands on a small paddling boat with a small motor and docking was difficult as most islands had neither proper docks nor beaches. The first task upon reaching an island is finding or creating a sheltered spot to leave equipment in and carry out measurements of the skinks away from direct sun. 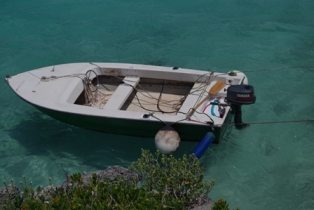 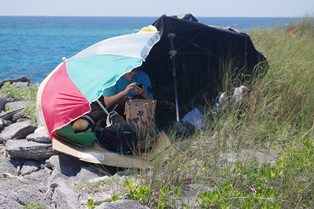 Makeshift shelter from the sun

“The traps were either glass jars or inverted plastic bottles filled with wire balls containing cheese or fish, and fish oil. Oil is rubbed around the openings to deter ants and enhance the smell for the skinks. Traps are placed at an angle and covered in foliage to prevent the skinks overheating, and they are checked every hour. 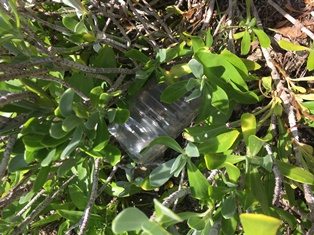 “The excitement starts when a skink is caught; it is taken to the base area in a breathable bag where measurements are taken (e.g. weight, limb lengths). The skink is sexed (if possible) and photographed before being tagged with a microchip in its flank. Faecal/ mouth swab samples are also taken if possible for later testing. Finally, the skink is released where it was captured.

“The best part of being a field assistant in a small party (two or three) was being able to do a lot of the skink handling and measuring myself.

“The main problem with surveying skinks is the variable weather. Usually Bermuda is hot and sunny providing lots of opportunities for skinks to forage and bask, but when it’s rainy and dark, it is both difficult to find skinks and to be able to travel out on the boat on stormy waters. On occasion, we managed to get lifts from a safer, larger boat (and once, from a large police speedboat).

When we couldn’t survey skinks, we found other ventures to keep us busy. As well as sunbathing, snorkelling and photographing the beautiful wildlife on Nonsuch (not to rub it in), we spent time observing many of the other species on the island.

“Part of the job seemed to be informing the public about our work and why it is important. Many people we encountered were Bermudans and often had a rough idea of what skinks are and why conservation is necessary which was great to see. Others, including tourists, were unaware of the issues.

“It wasn’t until the second week that I managed to see my first good haul of skinks. The weather was perfect (for skinks at least, we were knackered after setting up the traps) and as the day heated up, more and more rustles of leaves could be heard; a good sign of skinks in the area. During the hottest part of the day, we were catching skinks in groups of three or four per trap. Many of the individuals were new to the study but a few specimens (including one with a bifurcated tail – a product of imperfect regeneration) had been monitored in previous years, showing that the tags were lasting and the skinks were surviving.

“It was surprising to see the range of habitats that skinks are able to survive in; some islands were barren and rocky, often lacking plants larger than weeds and some were sandy grasslands. Skinks manage to forage for insects, crab parts, and anything else that finds its way to these islands. Even more strangely, some rocks were fully submerged by hurricanes but somehow skinks were found shortly afterwards.

“The days that heralded no skinks were disappointing, not just because I enjoyed the whole experience and the little skinks’ faces, but also because it highlights the rarity of this species, even on the islands they are endemic to. Perfect weather and perfect habitat were not always enough for us to see any skinks, just highlighting how rare they are.

“There is hope for the species however; the Department of Environment and Natural Resources is constantly removing invasive species and has introduced measures to prevent untouched islands from receiving these pests. As Helena’s work continues, the number of locals learning about the skink and its problems is increasing. It is still in the hands of Bermudans to save the skink and I believe, with the guidance of governmental departments, they will succeed in doing so for the foreseeable future.

“My time in Bermuda opened my eyes to the struggles of conservationists as they attempt to preserve and protect, yet this has only emboldened my desire to follow in their footsteps.”

Read more from Helena Turner and the work she’s doing in Bermuda to help protect the Bermuda skink, here.