Ensuring we provide the perfect conditions for animals in our care, especially reptiles, can be a difficult task.

Our experts often have to step in with scientific methods to enhance this. Reptiles rely on their environment to maintain their body temperature, each species will have a preferred optimal temperature zone that we work to recreate. However, we often we know very little about rare species, and what environment that suits them best, as they are challenging to study in their native habitats. 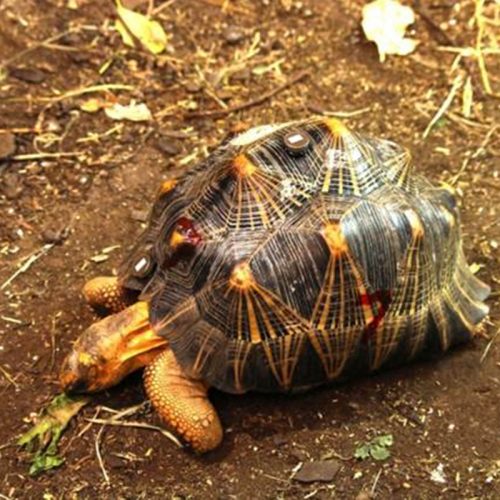 We regularly use scientific methods to help refine the environments we provide and monitor our animals regularly. This was the case recently for our group of radiated tortoises. This Critically Endangered species is from the dry spiny forests of Southern Madagascar where they are threatened by illegal trade and habitat loss. The species hadn’t bred in the zoo for seven years so we decided to look into their behaviour in response to their thermal environment to see if changes could be made.

We were interested in the behaviour of our group of seven radiated tortoises and how that related to the areas of heat provision in their habitat. To collect this data we used automatic camera traps that took images of the tortoises throughout the day for a week so we could work out what behaviours they were doing and when.

“Each tortoise was individually numbered so we could identify them from the images. We also measured the temperature of the environment and of the tortoises themselves using tiny dataloggers which we fitted to the tortoise’s shells.”

Results showed that some of the tortoises, particularly the younger (and smaller) animals were spending a large amount of time basking and that the temperature was lower than what was expected. Leah tells us more:

‘We decided to move the tortoises to an area with larger and hotter basking spots to see if that would have an impact on their behaviour. So once they moved, we collected data again using camera traps and data loggers to investigate any change in behaviour and temperature.’

The results from the new area showed that not only had the temperature increased, but the younger tortoises were spending significantly less time basking and more time foraging. All the tortoises in the group were quicker to get to the food too. These results were reassuring that the thermal environment was right for the animals, and this was reflected in a change in their behaviour.

We compared the temperature range to that of Southern Madagascar and found that they were very similar. Following this change we were thrilled when fertile eggs were laid in October. Following an incubation period of 100 days, two tortoises hatched for the first time in seven years which is a real boost for the European breeding programme.