One year ago, Chester Zoo conservation scholar Jacqui Morrison started her PhD research looking at the physiological and ecological effects of limiting wild African elephants in National Parks within the mountain forests of Kenya.

Here she tells us more about her recent field trip: 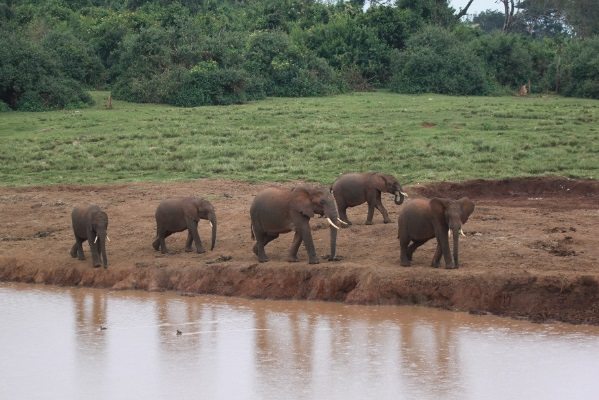 A family group of elephants at a water point

“This PhD was a great opportunity to apply theory that I had learnt during my previous undergraduate and postgraduate degrees into practise to help protect one of the world’s largest and iconic mammals.

“Kenya has a rapidly increasing human population, this has resulted in large areas of land that were traditionally used as seasonal migration routes for elephants being converted into agricultural land. When humans and elephants co-exist, conflict between them such as property damage, crop-raiding and human injury can occur, this can result in retaliation killings to protect livelihoods and human life.

“As a method to reduce this conflict and protect both the elephants and the local communities, a fence was built around the Aberdare National Park to keep the elephants within the park; I am studying if there are any effects of the fence, both to the elephants themselves and also to the vegetation within the national park.

“In June this year I set off on my first field trip to my research site in Kenya where I spent three months collecting data for my study which has many different components; including, observing the elephants in order to get estimates of population numbers, gathering demographic information of the groups including total group size, age structure and sex ratios and finally collecting vegetation data to accompany the remote sensing data I had been working on whilst in the UK to then be able to assess elephant damage.

“Due to the dense vegetation in the montane forest, a herd of elephants could be only 50 meters away but not be visible to people, so the majority of observations were conducted at watering points and using camera trap footage.

“The first task was to enter the Aberdare National Park in order to place a number of camera traps that were set up in a grid system, due to the terrain and high altitude this was physically demanding and challenging. But when in the untouched, closed-canopy of the forest, the beautiful scenery made you feel privileged to be alone with nature. 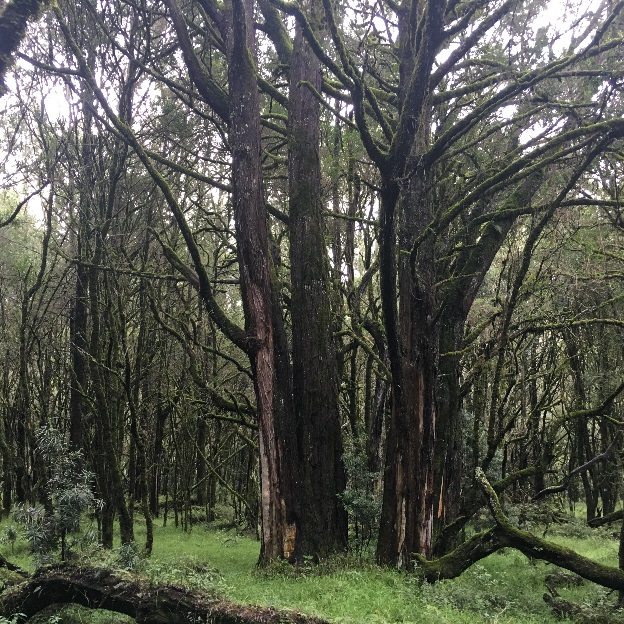 Image of the closed canopy of the Aberdare National Park

“Once all of the camera traps were set it was time to start looking at whether confinement was having an impact on the physical condition of the elephants. To do this I had to observe individual elephants and record the body condition scores on a scale of 1 to 5 of adult and sub-adult individuals within the population using a scoring index that was validated in another study.

“To continue with monitoring the physiological state of the elephants, I had to locate fresh dung from observed individuals which was particularly challenging within the environment due to poor visibility and a difficulty in finding elephants as this year the climate conditions were unusual for that time of the year; being colder and wetter than usual. It is thought that the elephants had moved into areas of thick bamboo to take shelter. Once we had located some elephants and had observed them defecating, I was able to go in and collect a small sample of the dung under the supervision of wildlife rangers. Due to the difficult conditions, being able to collect the dung samples was an exciting moment! 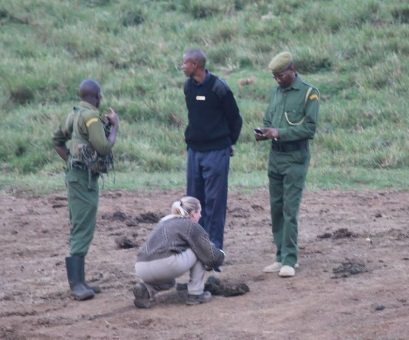 “Once we arrived back at camp, I set up a mobile laboratory so that I could extract the stress hormones from the dung and load them into cartridges ready to bring back to the UK and analyse to determine if the confined elephants have different hormone responses compared to a population of elephants that are not fenced. 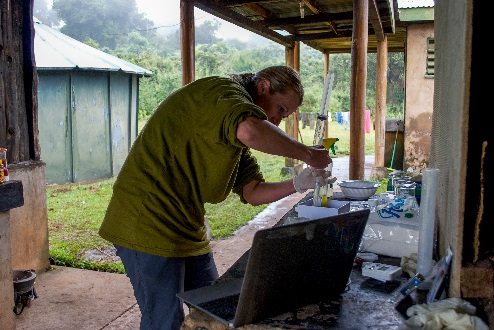 “My three months in Kenya went very quickly and I am looking forward to my next field season when I will be returning in 2017 to collect more data from the elephants in the Aberdares, until then, I will be collating and analysing my results so far and continuing my work looking at the vegetation and habitat of the park using satellite imagery.”