Studying the behaviour of JC, the dominant male mandrill

An important role of our applied science team is to observe the behaviour of different species of animals at the zoo and to report back their findings to the curatorial team that can then implement relevant actions if necessary.  Victoria Davis, our Behaviour Officer, tells us more about JC the dominant mandrill that the team had been observing.

Our conservation and science work focuses on six specialisms with one of them being Wildlife Health and Wellbeing.  This means that the various research projects conducted at Chester Zoo are designed to address and inform matters that may impact on the health and wellbeing of all the wildlife at the zoo.

Part of this includes to regularly evaluate our husbandry techniques but also to assess the habitat spaces and environmental enrichment we provide to our animals in order to provide evidence-based recommendations for the care of the species at the zoo.

“An animal’s behaviour can give us good insight into its health and wellbeing.  Collecting behavioural data at the zoo provides us with information about how animals spend their time, what areas of their habitat they use most often and, in group-living species, how they are interacting with other individuals.  This information is valuable for making husbandry and management decisions to ensure that an animal’s environment provides everything they need to be healthy.”

Victoria is one of our experts in animal behaviour and she regularly observes various individuals to collect data for the different animal teams.  Studying the behaviour of the animals here at Chester Zoo is crucial and allows us to gain particularly useful insights into the way social species organise themselves.

The mandrills (Mandrillus sphinx) for example are known to be strongly affected by changes in their social structure and that can have a big influence on the group cohesion so looking at individuals’ behaviour can provide key information about the group as a whole.

Mandrills are very social, living in large mixed-sex groups in the wild.  Within these groups there is a social hierarchy with the dominant individuals at the top and the subordinate individuals lower down.

A mandrill’s hierarchical position is likely to influence their behaviour.  Dominant individuals, for example, tend to have easier access to a higher quantity of the more desirable and calorific food items, whereas subordinate individuals may have to be faster and climb higher to get hold of these foods before the dominant individuals do.

Collecting behavioural data on JC, the dominant male at the zoo, provided interesting information about the group of mandrills and the variations in their social structure.

To collect the data, the researchers recorded all of JC’s behaviour over hour-long sessions, collecting on average around five hours of data a week. They varied the time they observed him so that they could get a good idea of how his behaviour changed throughout the day. Alongside recording JC’s behaviour the team also observed what the rest of the group was doing.

By recording the behaviour of a group or individual animals we can get unbiased information about their activity levels and behaviour over time to ensure that any management decisions that are made can be based on evidence and are in the animal’s best interest.

To get an approximate idea of the ten other individuals’ behaviour, the researchers did a visual scan of the whole group at ten minute intervals and recorded all the different behaviours they observed. 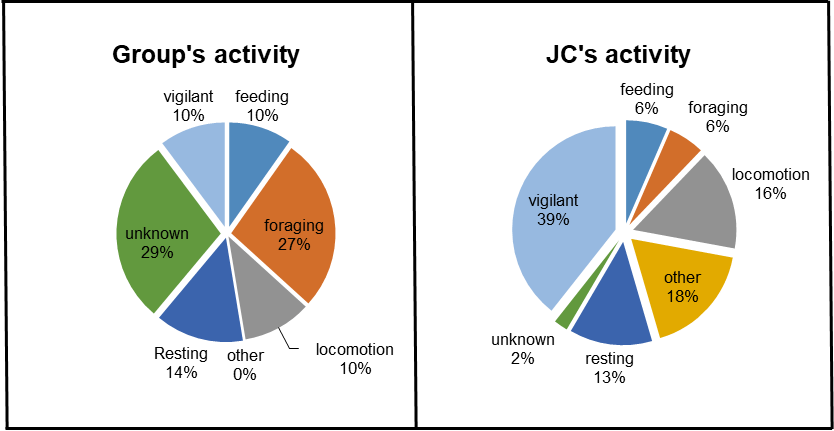 The team of scientists collected 125 hours of behavioural data over four months allowing them to get an idea of how the dominant male spent his time.  They then classified the behaviours in the activity budget as ‘active’ or ‘inactive’ according to how much movement they elicited in the dominant male.  For example, resting and being vigilant were classified as inactive behaviours as JC would often be sitting or lying down during these activities, whereas feeding, foraging and movement were categorised as active behaviours.

Figure 1 shows that JC spent almost 40% of his time being vigilant whereas the rest of the group spent only 10% of their time engaged in this behaviour. One hypothesis for this high proportion of vigilance-related behaviour conducted by JC is that as a dominant male he needed to take care of the group and so needed to always look for potential dangers or risks.

This figure also showed that the group spends more time foraging than JC did, and that could potentially be explained by the fact that he spent more of his time being vigilant and so has less time to forage.  As a dominant male, JC also had access to the food prior to the rest of the group which could be another reason of why he didn’t need to forage as much as the others.

The researchers also looked at the temporal aspect of JC’s behaviour and they discovered that the dominant male was most active in the morning and around the middle of the day, just after the group is fed.  It is around this time that JC was walking around exploring and searching for food. 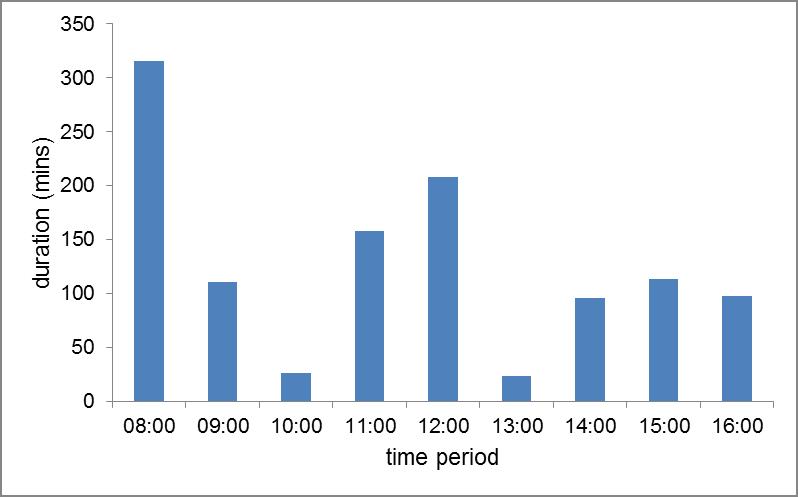 JC’s activity level throughout the day

This behavioural observation, in addition to providing us with precious information about the lives of the species at the zoo, also allows us to provide evidence-based recommendations for their care.  In the case of JC for example, the primate team noticed early on that the dominant male was surprisingly inactive and seemed to be putting on weight.

The data collected by scientists from the Applied Science team proved evidence that he was indeed spending 70% of his time either resting or conducting vigilance behaviours (see below image), which are both characterised as inactive behaviours. 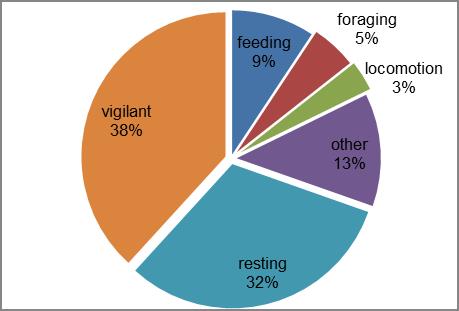 “Once JC’s inactivity and subsequent weight gain was raised by the keepers, collecting behavioural data was the logical step in order to have the information needed to better evaluate his wellbeing.  Along with daily keeper observations and veterinary expertise, it was crucial to provide a detailed assessment of his state of health.  As the dominant animal of our mandrill group for over twenty years he has been critical in the success of our group, and this information allowed to manage him and ensure his quality of life was maintained.”

Despite the changes made following this study, JC’s health and behaviour remained a course for concern.  During a detailed examination under anaesthesia it was discovered that he had developed osteoarthritis in several of his joints, which was deemed to be having a significant impact on his ability to move around, and so also to his wellbeing.  These changes could not be reversed and so for wellbeing reasons the difficult decision was made to euthanise him.

JC was a hugely charasmatic animal and was popular both with visitors and the primate keepers, some of which had helped looked after him for the 20 years he was at Chester. Over his time he played an important part in the European Endangered Species Breeding programme, with his offspring being transferred to numerous zoos around Europe and the US, as well as being an important ambassador to educate millions of zoo visitors of the importance of mandrills and their threats in the wild.