“In April 2015 I was fortunate enough to secure funding from Chester Zoo’s Act for Wildlife, to conduct some exciting research on the flooded plains of central Cambodia as part of my MSc in Conservation Science. Collaborating with the Wildlife Conservation Society (WCS), my research was aimed at understanding how local people interacted and impacted Bengal florican (Houbaropsis bengalensis) populations. 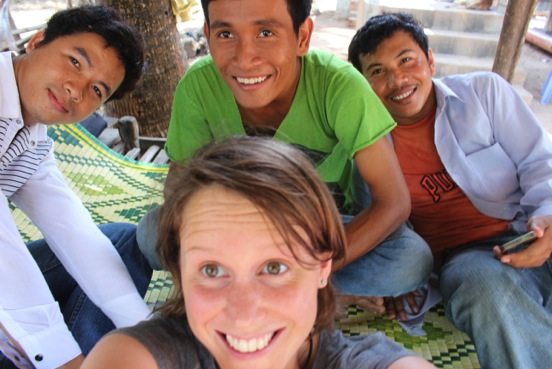 “What is a Bengal florican? That is a good question, and one I asked myself only a few months previous. The Bengal florican is a critically endangered bustard species, an estimated 500-1500 individuals live across two distinct populations; one in the Terai grasslands of India and Nepal and the other in the flooded grasslands of central Cambodia. 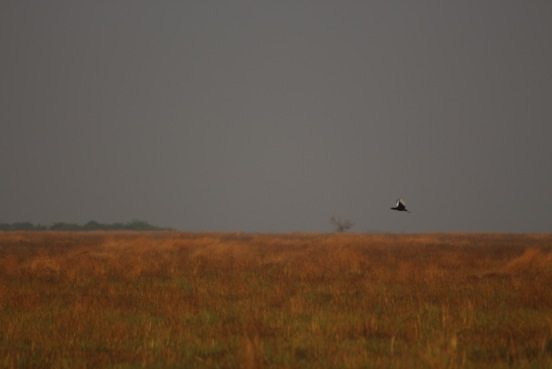 My first sighting of the elusive florican – once you know where to look they are surprisingly easy to spot! Photo credit: Harriet Ibbett

“It is estimated that 66% of the world’s florican population live in Cambodia; 80% of which inhabit one province called Kampong Thom. In Cambodia, floricans are a migratory species, breeding in the seasonally inundated grasslands in the dry season and migrating north when the Tonle Sap annual flood arrives. Floricans have interesting mating rituals, whereby males always return to the same territory where they hold gallant lekking displays to attract females.

“Why are floricans endangered? Historically, it was thought there were thousands of floricans wandering the floodplains in Cambodia, however, over the last 40 or so years, hunting for food, and more recently changes in local land use, have caused numbers to plummet. Only 432 individuals are estimated to remain in very small populations. 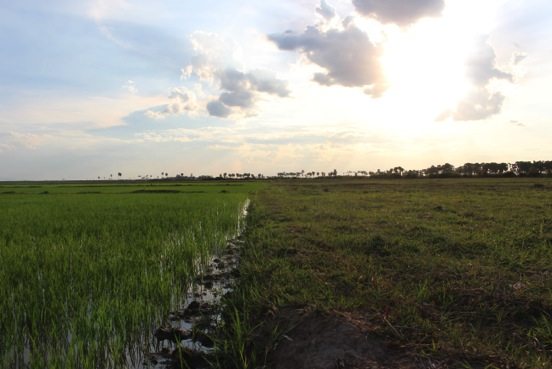 “The aim of my research was three-fold: firstly, I aimed to find out how local people’s livelihood activities could be impacting florican populations. Secondly, I wanted to know whether local people were hunting florican – if so, who and why? Last but not least, I wanted to understand local people’s knowledge and attitudes towards conservation in the grassland areas. Much of the research conducted on floricans to date has focused on the ecology of the species. Little research had previously been undertaken to understand how local people’s activities impacted floricans. 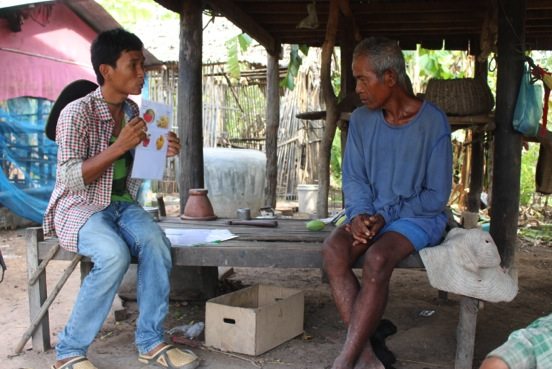 “With funds generously provided by Chester Zoo, Tropical Agriculture Association, Imperial College London, WCS and the help of three research assistants I interviewed 616 households in villages around protected and unprotected areas of florican breeding habitat. I asked people about themselves and their families, their livelihood activities, their bird sightings and whether they hunted birds. Focus group discussions were also held with groups of villagers to understand seasonal and temporal changes in livelihood activities.

“I learnt a lot about rice, rice and more rice (I also ate a lot too!). Growing rice for subsistence and for sale is the main livelihood activity across Cambodia, however, patterns of rice growing in Kampong Thom are changing. The results from my interviews showed that 40% of those interviewed grew rice in the dry season to sell whereas ten years ago most people only grew rice in the wet season for consumption.

“Growing rice in the dry season directly coincides with the floricans breeding season, which reduces the area and quality of habitat available for floricans to display and nest. The research identified that 8% of households hunted birds, with very low levels of opportunistic florican hunting detected and that when communities benefitted from conservation, they were more receptive to it.

“Looking ahead, the florican has a challenging future. The floodplains are rapidly developing, with human populations booming and agriculture a prime focus of the governments development agenda. This research has helped to equip WCS with a more informed view of the social context in the floodplain, from which they can take evidence-based decisions to direct future florican conservation policy.”