Meet Mark Wylie, primate keeper at Chester Zoo. Mark was selected to be part of the recent Madagascar expedition to help our colleagues at Madagasikara Voakajy with their lemur surveys. This was in addition to the golden mantella surveys the team also carried out.

“I am Mark and I’m one of the primate keepers here at Chester Zoo. I’ve worked here for a number of years; starting on the animal supplies team then moving onto the primates section after a few years.

Mark Wylie, with children from local school in Madagascar

“I was picked as one of the ‘experts’ for the  2016 Madagascar expedition to help the Madagasikara Voakajy (MaVoa) primatologists with their lemur surveys that they have been carrying out over the last year. I also took and helped to set up small mammal traps and camera traps to identify future involvement and conservation projects for Chester Zoo to help with.

“Getting to work with lemurs in the zoo is an amazing privilege that not many people get to do, but visiting them in the wild and actually helping out with the amazing work that we do together with our partners, is a once in a lifetime opportunity. If you have any interest in animals of any type then Madagascar is a dream place to visit.

“Before we set out on the expedition we had quite a lot to prepare. Collecting all the equipment together that we needed was no small task! Ten camera traps had to be checked that they all worked and 40 live small mammal traps had to be checked and cleaned. We also squeezed a wilderness survival and first aid workshop into our busy schedule before we left.

“On departure day, travelling began at 3am and we wouldn’t see the field camp for nearly three days. Everyone was excited and ready to get on with our adventure. Once we got through a long wait at customs at the airport we loaded the mini bus full of the equipment we had brought and headed out for our first (although dark) view of Madagascar.

Can you spot the leaftail gecko?

“Morning soon came around and we all met for breakfast at 6am to get ready for the bus to take us to meet the MaVoa team. Once camp was set up and the other members of the team had arrived we started to plan our next steps with the MaVoa team. 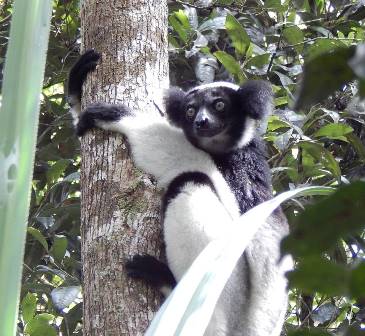 “Firstly, we needed to set up the camera traps. The MaVoa team had areas already marked out where they wanted them going. These areas selected either showed signs of animal activity or people had seen animals there. Some examples of animal activity included: teeth marks in a tree believed to be from an aye-aye, a fallen tree lemurs like indri/ sifaka and brown lemurs had been seen using to cross the footpath and also animal tracks on the ground.

“We set out in two groups to set the cameras up as quickly as possible, as six days is a really short period to try and capture any pictures. We set cameras high up in trees which the local guides climbed and positioned; we also set up a few close to the ground so that we had all areas covered.

“Once back at camp the next job was to set up the live small mammal traps; we had 40 live mammal traps in two different sizes. The traps were mainly placed in two specific areas, running alongside the main path along or next to animal trails and in trees.

“The traps were baited with a mixture of banana (which they had used in past traps) and peanut butter mixed with rice. The traps would be opened and baited last thing at night and checked at first light in the morning. The next morning was an early 5.30am start to check on the live small mammal traps. Our first morning revealed no traps but this was no surprise. 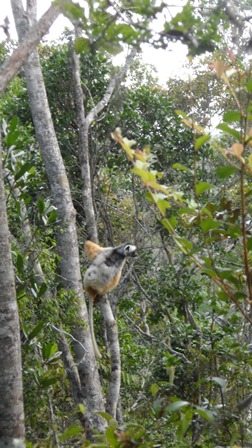 “We then headed out on the first lemur survey of the trip. We walked along the community paths through the jungle, into thick vegetation. We had to quickly get used to this type of environment as the next few days, the lemur trails were up and down hills, crawling through thick vegetation following the set out routes. It was worth it when we came across our first lemur – a mother and juvenile woolly lemur.

“Throughout the days we were doing the lemur surveys we were lucky enough to see a good amount of lemurs like indri which is the largest species of lemur and diadamed sifaka, an orange and white sifaka and brown lemur.

“We were also fortunate enough to be able to go on night walks with our guides through paths in the forest. This enabled us to see a lot of the nocturnal lemurs moving at night. We were able to spot them so well in the dark because when you shine a torch into the trees you can see a reflection from their eyes.

“I had an amazing expedition and learnt a lot about what is happening in the field and the hard work that goes on every day to help save species!”