We are using evidence-based research to better understand the relationships and social positions of our chimpanzees to inform husbandry and management decisions to improve wellbeing.

In the wild, chimpanzees live in large, complex social groups of up to 120 individuals. Group members hold positions in a social hierarchy led by a dominant male, and form sub-groups whose size and composition changes over time. The social environment of ex-situ populations, however, is different to a wild setting due to controlled breeding. At Chester Zoo, we work hard to ensure that the physical and social environment for our animals is as close to the wild as possible. We are using a technique known as social network analysis to quantify the social bonds of individuals here at Chester Zoo and compare this to our knowledge of wild populations, influencing future animal husbandry decisions.

Hattie Hayeck is conducting her integrated master’s degree in biological sciences at the University of Liverpool and is our current Animal Behaviour and Welfare Intern. Hattie assists our Conservation Scientists in undertaking animal behaviour research across a variety of species at the zoo. Alongside her other projects, Hattie has been studying the social dynamics of our group of chimpanzees.

“The characteristics of chimpanzee social groups provided me with an opportunity to learn about animal social network research. Learning how to individually identify our 20 chimpanzees was a challenging, but important, part of this project. Once I could pick out individuals, it was fascinating to see how their personalities affected the group dynamic, and how their interactions and position in the group changed over the past seven months. I found that the chimpanzee group here at Chester Zoo was really cohesive, with group members interacting with all other members in the group, whilst also showing preferential relationships each month.”

Baby Stevie, a one-year old female chimpanzee, and her mum Zeezee maintained high values of a social network measure called graph strength. This tells us that Stevie and Zeezee were very popular as they had a high number of strong friendships with the rest of the group. Carlos and Eric are male chimpanzees aged 14 and 15 respectively. Through observing dominance displays, I could see that Eric and Carlos were beginning to compete with Dylan – the alpha male – for the top position in the hierarchy. 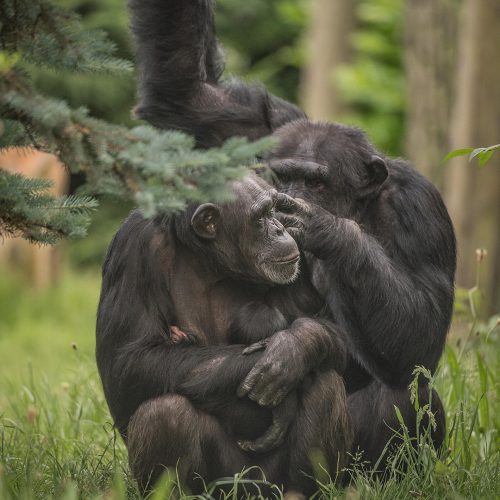 Hattie explains the impact of breeding for our chimpanzee group:

“The change from a non-breeding to a breeding group will certainly affect the social dynamic in the future. My study has shown that Chester’s chimpanzees are unusual in that there is currently no dominant female. It will be interesting to see who of the females establishes themselves in the top position and, thereby, gain their first choice of mate now that they are able to breed. Additionally, the birth of Stevie has already shown the influence a baby has on bringing the group closer together, and developing maternal behaviours in individuals who may have not seen a baby before. Patti, a 21-year-old female, frequently babysits Stevie despite being an unrelated female. It may be that Patti is practising her maternal behaviours on Stevie in preparation for a baby of her own in the future.”

The results of Hattie’s study will be used as a baseline to monitor long-term changes in our chimpanzee group. The change in hierarchy position for Carlos and Eric in particular will be closely monitored, in addition to the establishment of a dominant female. Now that her placement year is reaching an end, we asked Hattie to reflect on her time at Chester Zoo and asked what her plans are for the future:

I have gained so much from my year at Chester Zoo. It’s been extremely beneficial for someone just starting out in their career to work with such talented people in the Applied Science Team

“Being able to manage my time on a variety of projects both outside in the zoo and inside Cedar House is something I really enjoyed. I loved that my research contributed to improving animal wellbeing as this was the main reason why I wanted to work in this field. Equally important to me was furthering the mission of the zoo in preventing extinction by talking to the visitors about what research I was doing and why. I would love to continue using science, and explaining its significance, in improving animal wellbeing in the future.” 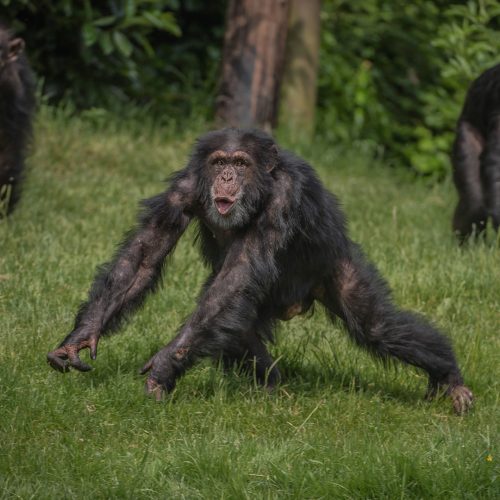