It was non-stop for the 12 staff members as they worked closely with local villages in areas of human-elephant conflict. If they weren’t sharing their knowledge and skills in a workshop-they were volunteering their support in general maintenance and construction. And if they weren’t doing that they were travelling from village to village.

It makes us feel a little worn out just thinking about it!

Over the next few weeks we’ll be sharing the experiences of the different members of the team and the activities they got up while out in the field.

Below Becca Biddle-one of the Chester Zoo dozen-gives us an insight into how the expedition went:

“Preparation for the 2015 Assam Expedition had been well under way for five months-but on Saturday 7th February an excited-and slightly nervous-team of 12 eager zoo staff-met at Cedar House-Chester Zoo-complete with personal luggage-work kit-visas and enough anti-malarial tablets and mosquito repellent to stock a pharmacy-for their long awaited departure to India!

“Being responsible for the organisation of this expedition-I was aware of the huge amount of work each member of the team-especially our sub team leaders (Mark: bee keeping-Maile: horticulture-Peter: electrician-Jamie: Business-Vicki: Animal Husbandry) had put into writing-preparing and practicing their workshops that were to be delivered to groups of local villagers within two districts of Assam.

“There was of course an element of going into the unknown-each sub team member was an expert in their topic but this would need to be taught and applied within a very new and different scenario (new setting-new people-new equipment and resources) to what we are used to here in Chester.

“One thing group members had to focus on was flexibility and how they would be able to adapt their sessions to a range of different circumstances as necessary-both the content and indeed the more practical aspects such as lack of power and electricity-and unpredictable weather!

“Thankfully all this preparation really paid off – each team delivered valuable workshops to a range of different audiences in a variety of village settings-including the flood plains of the Brahmaputra River-which you will hear much more about in following blogs.

“The full team travelled to Guwahati-the major city and ‘gateway’ to Assam. The team then split in half-with the business and bee keeping teams travelling the five hour journey to Goalpara-the animal health-horticulture and electrical teams travelling first to Sonitpur. Half way through the expedition the groups swapped locations-meaning each group visited both districts.

“In each location we visited different villages delivering our workshops and spending time one-to-one with villagers looking at specific problems they highlighted. Over the ten days in the field 28 workshops were delivered-each attended by between 30 and 100 enthusiastic villagers!

“Many of the workshop topics focused on ways to improve livelihoods-building up this sustainability will hopefully in turn build up the villager’s capacity to deal with the elephants they share this landscape with-and reduce human elephant conflict.

“Family’s land holdings are shrinking due to an increased human population and migration into the area-which makes it a lot harder for villagers to sustain their traditional livelihood of agriculture (mainly paddy) to earn a living-so new and improved methods must be looked at.

“Another critical workshop topic was electrics; the electrical team were able to build up villager’s expertise in mitigation methods such as using spotlights and solar powered electric fences to deter elephants from crops and houses-directly protecting those villagers living on the frontline with elephants.

“It became very real to us after speaking to one local 80 year old woman who before the electric fence was put in around her village-had her house (made of jute wrapped with cow dung and mud) destroyed four times every year – as if life isn’t hard enough trying to make a living from growing rice-the back breaking labour that is involved-to have to rebuild your house time and time again. It would be very easy to demonise the elephant in this situation-but that is not the case-it is clear that the Assamese people really cherish this magnificent animal.

“Although the villagers we visiting were living in such poverty-I have never met a more welcoming-generous and gracious culture. In each village we visited we were treated like long lost family-provided with food-water and the occasional rice beer! 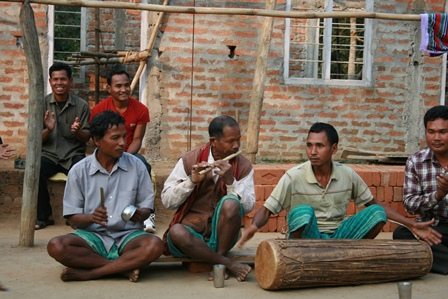 “All the people I met were clearly passionate about the wildlife they share their homes with; they expressed concern about plastics and chemicals polluting the soils they grow their crops in and are highly concerned about the poaching of their critically endangered vultures. They very much respect the elephant and are willing share their land with this species; they just need support and help to do so.

“All 12 of us came home with life changing experiences and memories we will never forget. The work of AHP is clearly making a huge difference to local villager’s lives-allowing people to live freely in their land without constant dread and anticipation for the next elephant raid.

“I hope this expedition has left behind as much knowledge-information and support as possible to help make the local villager’s lives living with elephants slightly easier-and indeed to help protect the elephant from a conflict it has no control over.”