We’re helping to save amphibians in crisis

My name is Molly Bletz-and I am a research associate at James Madison University in Harrisonburg-Virginia USA-where I am collaborating with Dr. Reid Harris on a plan to mitigate the lethal amphibian disease chytridiomycosis. In the summer-I will begin doctoral studies on Malagasy amphibians’ skin microbes with Dr. Miguel Vences at the Technische Universität Braunschweig in Germany.

Amphibians are threatened by the fungal disease chytridiomycosis-which has already killed frogs around the world. This disease is caused by the pathogenic skin fungus, Batrachochytrium dendrobatidis (Bd)-and is the largest disease threat to biodiversity at the present time. 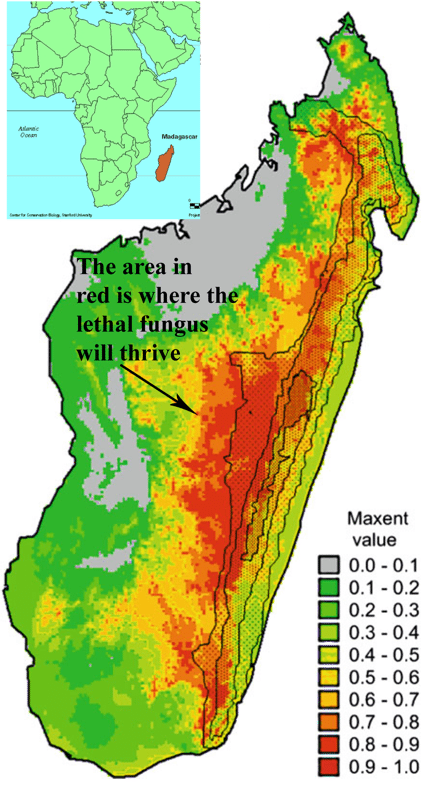 In Central America-species like the Panamanian Golden Frog can no longer be found in the wild because of Bd-and about half of Panamanian species in the uplands are extinct or are greatly reduced in number due to Bd.

Bd is currently absent from the island of Madagascar-but this pathogen will likely arrive at any time. Madagascar is a biodiversity hotspot-home to over 400 species of frogs. The map to the left shows the areas where Bd will thrive in red-which is also where most of the frogs live (Lötters et al. 2011).

Bd has spread rapidly around the world-so we predict that it is only a matter of time before the pathogen reaches Madagascar where it will likely decimate the diverse frog fauna. It is imperative to consider a prevention and mitigation strategy now in order to prevent catastrophic declines and extinctions in Madagascar like those seen in other tropical areas.

People consume yogurt to maintain and restore good bacteria-which protect us from disease-and the same principle works for frogs. Amphibian skin harbours many bacterial species. Some of these bacteria are beneficial and can inhibit the lethal chytrid fungus. The addition of locally-occurring protective bacteria to amphibians has effectively prevented disease in our laboratory experiments and in a recent field trial in the USA-which was conducted by our collaborators.

We plan to proactively find effective anti-Bd probiotics in order to implement probiotic conservation strategies to curb the devastation of Bd if it arrives in Madagascar and help preserve the remarkable amphibian biodiversity on the island.

Funding from the Chester Zoo is very important to the success of this project and is allowing me to travel in Madagascar in January and February-2014 to sample frogs in the wet season for potential probiotics. This trip is a follow up to the dry-season trip made by Reid-me and others in August and September-2013.

We brought back bacterial samples to James Madison University from 480 individuals divided among 67 frog species. We are starting to test these isolates for their ability to kill Bd-and some good candidate probiotics are showing up.

While on this first trip-we were able to sample one of the rarest frogs species in Madagascar-Boophis williamsi. Note its beautiful orange toes! This species will need protection from Bd if and when it arrives.