What do elephants do in the dark?

In 2015, Helena Stokes was awarded a studentship grant to support her research work in Sri Lanka. Like our Assam Haathi Project, Helena’s work focused on the Asian elephant – particularly those orphaned as a result of human-wildlife conflict. A year later, she’s been in touch to tell us how her project went and how she used the funding.

“I’ve just completed my masters’ course in Wild Animal Biology, a course run by the Zoological Society of London (ZSL) and the Royal Veterinary College (RVC).

“For my final research project, I studied the nocturnal behaviour of a large group of orphaned Asian elephant calves at a rehabilitation centre in southern Sri Lanka. Chester Zoo helped to fund my field research in Sri Lanka, including the camera equipment I needed for my research.

“Elephants are a highly intelligent social species, which makes studying their behaviour really interesting, and understanding more about a species’ behaviour may also help us to manage them well in captivity.

“Human-elephant conflict is a big problem in Sri Lanka, resulting in many calves becoming orphaned. This is why there is a need for rehabilitation centres such as the Elephant Transit Home, Udawalawe, where I carried out my research. My study focused on a large group of 34 calves, which are fed milk every four hours but spend the majority of time free-ranging in the nearby national park.

“The night behaviour of elephants has been little studied before – there are the obvious difficulties of visibility, especially in the field! The majority of previous studies have been carried out in zoos, whereas this orphaned study group may share similarities in behaviour with both captive and wild elephants, due to their free-ranging conditions.

“My aims were to build up a basic nocturnal activity budget for the calves, to compare different ages of calves, and also to look for signs of any stereotypic behaviour. Stereotypic behaviour describes repetitive behaviour patterns which have no obvious function, such as swaying and pacing. These are rarely seen in wild elephants, but have often been seen in captive elephants. They are sometimes suggested a possible indicator of poor welfare, so I wanted to investigate whether these orphaned calves also showed signs of this.

“Of course, every field trip has its challenges, and not everything went smoothly. We had many issues with our equipment. The original cameras we bought weren’t powerful enough, so I had to change my research plan – instead of downloading CCTV camera data each day, I observed the calves the old fashioned way, sitting up at night with a head torch and an infra-red video recorder! There were also more surprising dilemmas, such as an elephant trampling and breaking one of the cameras, and managing to mistake a rock for a sleeping elephant for three hours…! 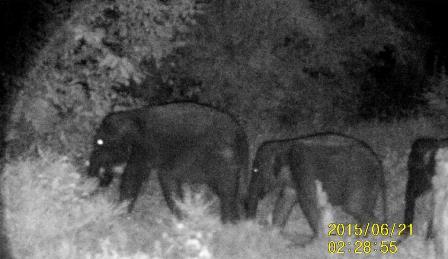 “After weeks of hard work and study I had 53 hours and 5 minutes of video to analyse. Unsurprisingly, the most common behaviours observed were resting and feeding. My main other findings were that the calves spent more time in lying rest compared to adult elephants and  they appear to have synchronised sleeping patterns – once one elephant lay down, the others shortly followed. I also found that younger calves spend more time in close proximity to the rest of the group, suggesting that calves increase in confidence and exploratory behaviour as they grow older. Finally, I found no evidence of stereotypic behaviour in the group, which may suggest that welfare is good, although the link between stereotypic behaviour and welfare is still much debated.

“Whilst this is still a fairly new area of research, what I observed suggests that this orphaned group of elephant calves are exhibiting similar behaviour to what is known of wild elephant behaviour. This is good news – it means that hopefully these calves have a good chance of survival when they are mature and fit enough to be released into the wild.

“I wish I could have stayed in Sri Lanka for longer to study the elephants further and watch how their behaviour changes as they get older.

“I’d like to say a huge thanks to Chester Zoo. Thanks also to the Universities Federation for Animal Welfare (UFAW) for their financial support, and to my project supervisors Dr. Vijitha Perera, Dr. Ayona Silva-Fletcher and Dr. Nilmini Jayasena, for their input and advice. Finally, none of this would have been possible without the help and assistance (and torches!) from all staff at the Elephant Transit Home, Udawalawe, Sri Lanka.”

JOIN THE FIGHT BY SIGNING UP TO OUR NEWSLETTER