Working to protect orangutans in Borneo

Following on from the blog update we shared with you from HUTAN’s Dr Marc Ancrenaz, we have another post from our project partners – this time we’d like to introduce you to Dr Isabelle Lackman, co-director of the project alongside Marc.

Together with HUTAN we are working to protect the population of orangutans in the Sabah State of Borneo. This area is home to one of the largest orangutan populations in Malaysia. HUTAN are on the frontline of the fight to protect the forest ecosystem and the many species that exist within them.

“I’m a primatologist. I did my training and PhD in Saudi Arabia researching the socio-ecology of Hamadryas baboons; while wishing I was in Borneo working with orangutans! It was great and interesting though, and I really enjoyed it.

“As soon as I’d finished my PhD, we wanted to join a project in Borneo, but nobody would hire us, so Marc and I decided to start our own project. For many reasons we identified the Kinabatangan region as one of the most interesting sites to study orangutans; it has forests with orangutans but also has communities, agriculture, etc. so all the elements and factors were there to study and work with.

“Hutan is currently working on all sorts of things; the project has worked with microscopic snails, all the way through to research on orangutans, elephants and hornbills. We work with people, children, government departments – there are different teams but we all work for one goal, which is to find practical solutions so that people and wildlife can cohabitate in one region.

“The habitat in Borneo is very varied. Borneo is huge! It’s not monotonous at all. The primary rainforest has pretty much disappeared, there are still a few places where you can find it, but the vast majority of the surface of Sabah is now covered by secondary forest and agriculture/ human settlements. The Kinabatangan floodplain in Eastern Sabah is one the largest and most biodiverse in Malaysia. 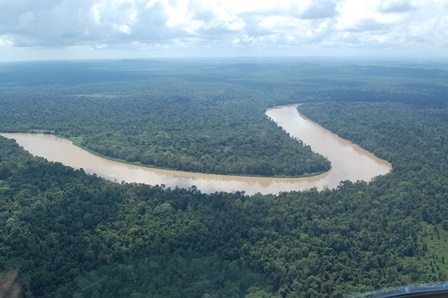 “It once sustained wide-roaming wildlife populations and the livelihood of its indigenous people. In the last decades however, the region has been subjected to large-scale landscape changes.

“Several initiatives are already on-going to mitigate the negative effects of fragmentation, through the establishment of wildlife corridors, riparian habitat restoration (the border between land and a river) and other methods.  But the success of these efforts is still hampered by the lack of an overall strategy and consensual support.

“It is important to get some connectivity between the patches of forest – even if you have a good population of orangutan in one pocket of forest; they have no access to other orangutans in the other pockets.

“I’ve always been intrigued and interested in working with orangutans, but later on I realised just how extremely smart and interesting they were to study. Although our project started working to protect orangutans and still does, orangutans are actually the charismatic species with which we can address all the other conservation issues for the less charismatic species. They are an umbrella species; so by protecting the habitat for orangutans we’re protecting the other lesser known species within that environment too. 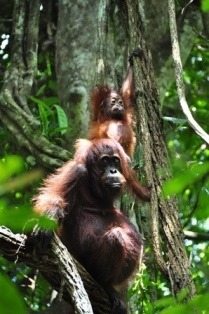 “Chester Zoo provides plenty of support to Hutan. First is the financial aspect; this is extremely helpful, it pays people’s salaries, the people from the community are able to work with us. We wouldn’t have a team or a project if we didn’t receive that support. It’s extremely important!

“Having such a great relationship with many different people at Chester Zoo who all work in different areas has been very good for, not only for Mark [Ancrenaz] and I as directors, but the rest of the staff. It’s been great moral support. And moral support is very important! Now we’re working together on campaigns with the Roundtable of Sustainable Palm Oil (RSPO), which actually adds a voice to the whole of environmental protection in Asia.”

Hutan have also been carrying out research in their study sites in Sabah to gain a better understanding of how orangutans are adapting to the increase in oil palm plantations and the new landscapes they are creating as a result. Read more, here.