Back from the brink: Chester Zoo saves tiny snails from extinction

A group of tropical snails, believed to be extinct for more than 15 YEARS, have been released back to the wild by conservationists at Chester Zoo.

The 800 lesser Bermuda snails, which were once driven to the brink of existence, have been given a new lease of life and travelled 3,000 miles back home to Bermuda, after being lovingly bred and reared by the zoo’s invertebrate specialists.

Feared to have vanished from the wild altogether, the species is listed as critically endangered by the International Union for the Conservation of Nature (IUCN) and experts say that the last live individuals were seen in Bermuda more than 15 years ago.

The tiny snails, which can only be found on the remote oceanic islands of Bermuda, disappeared after flatworms and carnivorous snails, two invasive species introduced by humans, devastated the last remaining snail populations on the islands, along with the destruction of their habitat.

The move to recover the species comes after 18,000 greater Bermuda snails – a close relative of the lesser Bermuda snail – were successfully reintroduced last year by conservationists from Chester Zoo and the Bermudian government.

Now, a further 10,000 greater Bermuda snails have also been sent back to Bermuda to boost their number and distribution across the Oceanic islands. It’s the first time two species of snails have ever been reintroduced as part of a conservation breeding and release programme in Bermuda.

It’s an unbelievable feeling to be able to say that we’ve successfully prevented the extinction of two incredibly important snails. The lesser land snails had not been seen in Bermuda since 2004, so the animals we were breeding at the zoo were some of the last surviving individuals on the planet. It really was down to the wire for this species.

“Thankfully, we had already developed a recovery plan for the greater Bermuda snail and had successfully reintroduced thousands of them back to the islands of Bermuda. We’re now continuing with this work in new locations after successfully removing the invasive species and replanting the vital habitat needed for the snails, and other endemic species, to once again thrive. This major recovery plan was used as a blueprint example, which we’ve now applied to a second species. 800 lesser Bermuda snails have now also been successfully bred and returned to the wild – proof that extinction can be prevented.”

The 800 lesser Bermuda snails have been released on to Nonsuch Island, a government owned and managed nature reserve. The greater Bermuda snails have been reintroduced to four new locations, bringing the total to nine islands since reintroduction efforts began last year. The areas were chosen after extensive research highlighted these particular islands as largely untouched and preserved – a result of strict quarantine protocols – providing the perfect haven for the critically endangered snails to flourish. 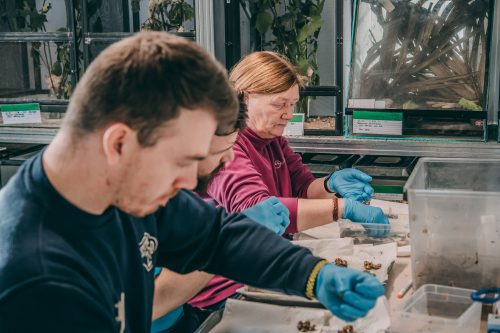 These species are some of Bermuda’s oldest animal inhabitants, so to have helped them back from the brink of extinction is a fantastic conservation success story.

Dr Mark Outerbridge, Wildlife Ecologist for the Department of Environment and Natural Resources of Bermuda, and the zoo’s partner

“Now that the snails are safely in Bermuda we will closely monitor their progress. The lesser land snails are so small that we are not likely to find them once they have been released, so for now, we’ve placed them inside a number of large enclosures in order to see how they transition to the wild. They will be fully released after we see evidence of reproduction and adult survival within the next few months.”

The successful conservation breeding programme is part of a collaborative project between leading conservationists at Chester Zoo, ZSL London Zoo, the Bermudian Government and a snail specialist from British Columbia, Canada.