Following on from last month’s blog update from our project partners the Lowland Tapir Conservation Initiative in Brazil, we have another update from the field to share with you. But, on top of that, the team are also celebrating 20 years of tapir conservation; which is such an amazing achievement!

“This year we are very excited to be celebrating 20 years of conservation efforts in Brazil! Yes, we started in the Atlantic Forest (Morro do Diabo State Park) two decades ago! We are planning several celebratory activities to be carried out throughout the year and we will definitely keep you posted about everything we get up to. We will use this opportunity as a catalyst for communication and outreach initiatives and we will work with the Brazilian media quite heavily too.”

From all of us at Chester Zoo, a BIG congratulations to Pati and the rest of our colleagues at the Lowland Tapir Conservation Initiative for their incredible and inspiring efforts for Brazilian lowland tapir conservation.

Their actions contribute towards the scientific work we do here at the zoo on tapir wellbeing – providing a habitat that is as close to their natural environment as possible – and their research also gives us a better insight into the reproductive behaviour and family dynamics of the species, all very important information for species husbandry practices. 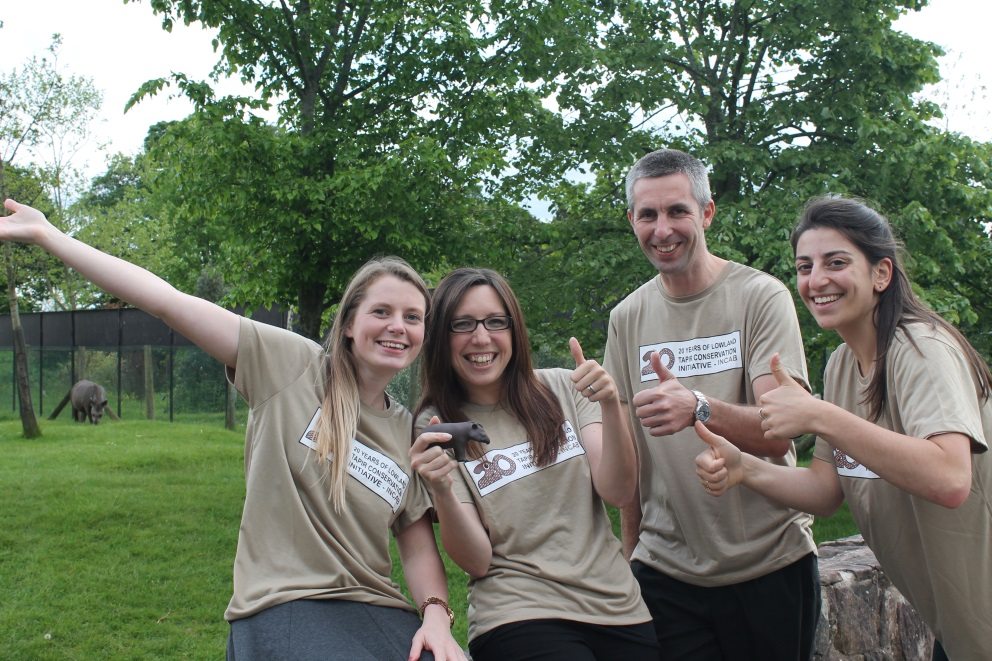 The Chester Zoo field programmes team joining Patricia in celebrating 20 years of tapir conservation in Brazil, with the Brazilian tapirs at the zoo

“The Pantanal – we will have our first capture expedition at Baía das Pedras later this month and we are looking forward to that. Last February, our team retrieved three GPS collars that fell off from our Pantanal tapirs: Mucci, Wie and Moreninho. We were able to successfully download the data from their collars. Moreninho is the son of Morena and Vivek, a mating pair we monitored through telemetry before (and continue to be monitored through camera-trap photos), so we are now able to put their spatial ecology data together to analyze how these ‘family units’ organize themselves in space!

“It was VERY interesting to look at the maps and as it turns out, Moreninho’s home range seems to be a lot more associated with his father’s home range…which I did not expect. Camera-trap photos have shown that Justine and Felippe had another baby! TED tapir has a sibling! We actually have a crazy set of camera-trap photos showing the four of them together…

How many tapir can you see?  Photo credit: Lowland Tapir Conservation Initiative

“On a different note, I would like to mention that all the data and results from the Lowland Tapir Conservation Initiative (Atlantic Forest, Pantanal and preliminary data from the Cerrado) have been made available for the Second Edition of the Brazilian Red List of Threatened Species, in partnership with Instituto Chico Mendes de Conservação da Biodiversidade (ICMBIO) – a Brazilian Environmental Agency.

“I overviewed the first national red list assessment in 2011 and will do the same for the second edition, starting this year. This is a fantastic way to apply our data for tapir conservation in Brazil.

“I would also like to share the most fantastic news: my TED Talk, published on TED.com in November 2015, has since then had over 1 million views (almost 1,150,000 right now!) and has been translated into 26 different languages, providing INSANE exposure to the tapir conservation cause worldwide!  If you have not had the chance to watch it, check it out here.”

We can’t wait to hear about more successes from the tapir team. If you want to catch up on the tapir conservation project, you can find more blog updates from the project here.