When first described by Lord Rothschild in the early 20th century, the Rothschild’s giraffe (Giraffa camelopardalis rothschildi) was free ranging and abundant across Kenya, Uganda and Sudan. Illegal hunting, agricultural expansion, and habitat degradation and destruction have led to the disappearance of Rothschild’s giraffe from almost all of its former range leaving it one of the most endangered giraffe sub-species remaining in the wild.

Now extinct in Sudan, there are only thirteen populations of Rothschild’s giraffe remaining between Uganda and Kenya with a total population size of less than 1500 individuals all of which are now confined to national parks and other protected areas.

Ravaged by poaching throughout the 1980s, 1990s and early 2000s, Kidepo National Park in Uganda is undergoing an incredible recovery.  Populations of many species including lion, buffalo, elephant, ostrich and zebra are increasing steadily due to the dedicated efforts of the Ugandan Wildlife Authority, however the giraffe population remains very small (25-30 individuals) and is struggling to recover. 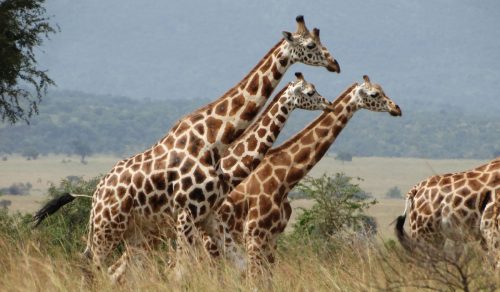 The reasons for this are poorly understood and this project aims to define which factors are restricting the recovery of this important population. Since July 2015, GCF and UWA with on the ground support from our Field Programme and giraffe teams have conducted two field  expeditions to Kidepo, conducting a full count of the giraffe population, collecting tissue samples for genetic analysis and fixing GPS collars to several individuals to track their movements and establish their core range.

With very little known about the Rothschild’s giraffe in the wild, this pioneering project will help to develop a strategy for the recovery of this highly endangered population and a national strategy for Giraffe Conservation in Uganda.