The tale of the mountain chicken

International Mountain Chicken Day 2019 is a chance for us to reflect on the history of one of the world’s rarest frogs, and the brighter future we are helping to build for it

Despite its name, the mountain chicken is not a bird, but one of the largest and rarest frog species in the world. Growing up to 22cm (8.7in) in length and 1kg (2lbs) in weight, the species has a voracious appetite, consuming anything that strolls by, ranging from insects to small vertebrates, and even the endemic Montserrat tarantula (Cyrtopholis femoralis).

Historically, the mountain chicken was widespread across the Caribbean, with populations numbering in the tens of thousands on every island where it lived. Their presence could be easily detected by the calls of males defending their nest burrows from competitors. Over time, however, these have fallen silent on all but two of the islands: Montserrat and Dominica. 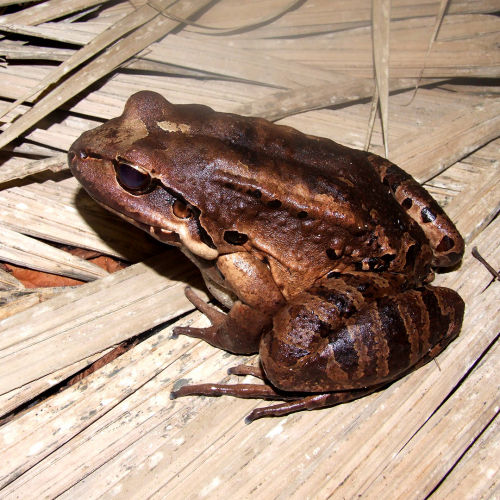 The former is a British Overseas Territory, and the latter, a republic that gained independence from the British Commonwealth in 1978.

The mountain chicken is deeply ingrained in the local culture; for centuries, it has been considered a delicacy, which is the source of its poultry-themed name. However, this consumption was relatively sustainable. The causes of the species becoming designated as Critically Endangered by the IUCN are rather a series of compounding factors that have impacted on the frog’s population over recent decades.

On Montserrat, a volcanic eruption in 1995 destroyed the island’s capital, Plymouth, and also laid waste to two thirds of the mountain chicken’s natural range, restricting it exclusively to the northern portion of the island.

This event was damaging, but meagre when compared to what would follow.

In 1993, mysterious mass deaths of frogs in Queensland, Australia were discovered to have been caused by a killer fungus – “chytrid”. When an amphibian is infected by the fungus, it rapidly spreads throughout the skin, causing a potentially lethal haemorrhagic disease known as chytridiomycosis.

Researchers believe the fungus spread around the world during the 20th century, in part facilitated by the mass movement of humans, as well as the trade in amphibians as an early method of pregnancy testing.

In 2002, the fungus arrived on Dominica, decimating what was then a healthy population of mountain chickens in the space of just a few years. Despite attempts at preventing the spread of the fungus, the same happened to Montserrat’s remaining population in 2009, eventually resulting in the species’ eradication from the entire island.

The remaining survivors are now in the hands of ex-situ breeding programmes. Chester Zoo is one of the European leaders in mountain chicken conservation breeding management. A population of 236 individuals survive in European institutions, 10 of which live here in Chester.

Over the last few years, our teams have studied every detail of feeding and breeding this species, from fertility and diet protocols to disease control. This culminated in the publication of “Best Practice Guidelines” in August 2019, working alongside our partners at the Durrell Wildlife Conservation Trust, Zoological Society London, Nordens Ark and Bristol Zoo to help set up other ex-situ populations around the world and support the 24 institutions keeping the species in Europe.

This ex-situ work is just one part of a larger plan to prevent the frog’s extinction. Now, our attention turns back to Montserrat, and returning the species to its volcanic home.

Alongside our partner organisations, Chester Zoo is engaged in efforts to test the feasibility of a release programme for the mountain chicken.

Early research suggests that, even amongst amphibian species that are particularly susceptible to chytridiomycosis, the build-up of tolerance amongst a population over time and multiple generations may be possible in a controlled area.

Such a controlled area is now set up, with a small mountain chicken population thriving and well. Here, they have a safe haven. But, what is stopping the advance of the deadly fungus into such a safe zone, wiping out everything it finds?

The cross-organisational team has deployed solar-heated pools to exploit a weakness in chytrid’s strategy: the fungus is an expert at spreading through wet forest floor environments within a temperature range of 17oc to 25oc. However, if you remove the fungus from its comfort zone, it struggles, and above 30oc, it expires completely. The mountain chicken baths are heated to 31c – comfortable for the frogs, but lethal for their disease.

Photos taken from the semi-natural release area on Montserrat. The frogs utilise the heated pools which are kept well above the temperature at which the chytrid fungus can survive.

Over the coming months and years, we will examine just how effective such safe havens are in enabling the population to resist chytridiomycosis, with the goal of significantly reducing its lethality.

We hope this work will see the eventual return of the mountain chicken to the forests of Montserrat and Dominica, and if successful, an eventual redistribution to the many other Caribbean islands from which they have been absent for a century.

As you read this blog, we are hard at work designing the future of long-term breeding facilities in semi-natural conditions where the mountain chicken frog historically occurred and is now extinct: The French Antilles, Guadeloupe and Martinique. Stay tuned in future as this plan unfolds.

YOU CAN MAKE
A BIG DIFFERENCE

Adopt your favourite animal and help fund our conservation work in the UK and around the world.