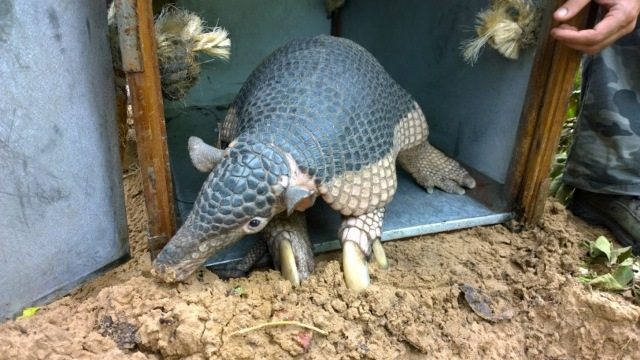 Alex having his GPS collar fit at the age at 15 months. Credit: Arnaud Desbiez

“We have just returned from the field and I am afraid I have some very bad news to share: Alex-the armadillo we have been following since his birth almost two years ago-has died. He was mortally wounded by a predator most likely a puma and died inside one of his mother’s old burrows.”

Alex was quite a famous Armadillo – so much so this sad news was picked up by The Guardian. 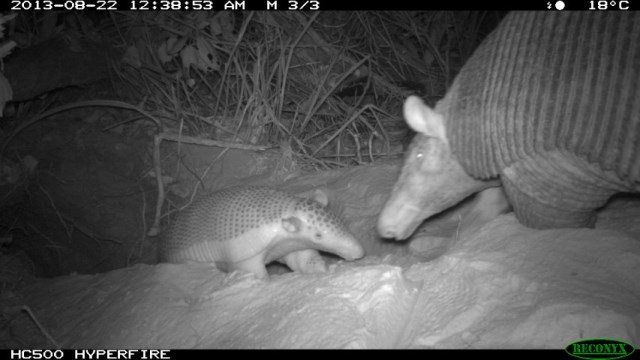 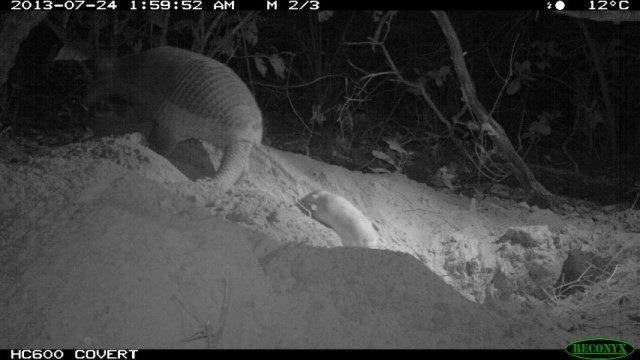 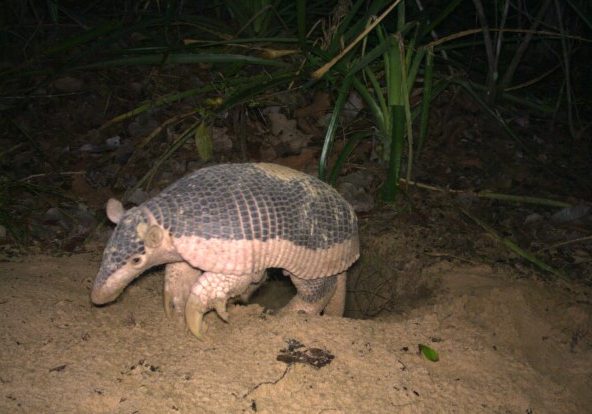 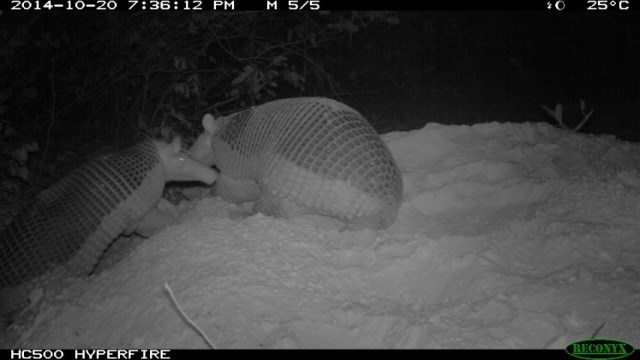 “For the past two years the first thing we do when we get to the ranch is travel 40 minutes to the area where Alex was last seen. Once we locate his burrow we place a camera in front of it and then search for his mother. This was exactly the routine we followed for the June expedition.

“Once located-I was surprised to see that Alex had selected one of his mother’s old burrows and had not even thrown any fresh sand out on the sand mound. If Gabriel and I had not just spotted fresh tracks from him leading to the burrow I would have been very worried. Still-he had been making his own burrows now for over 5 months and I did find it odd. We located his mother about 900 metres away from him-which was nice.

“On the evening of the third day we set out to find Alex and Isabelle again. Isabelle was quickly located-but Alex ‘s transmitter indicated the same area he had been found in three days ago and as we walked the signal indicated the same burrows…strange-but not unheard of.

“My heart sank as I saw that picture. I went to smell the entrance of the burrow. I was devastated. I smelled a faint smell of rot instead of the sweet-strong acrid smell of a giant armadillo. I could not believe this was happening. I was in total shock.

“The sun was setting and we returned to the ranch in a somber mood. Few words were exchanged that night.

“The next morning we returned to the burrow and slowly-carefully opened it until we found Alex’s body. The first thing we noticed was the puncture between his shoulder blades. His armor was strong and in good condition but around the puncture wound the bone scales were rotten. We are guessing that Alex was attacked and wounded on the night he entered the burrow. He managed to escape the predator-but suffered a deep wound between the shoulder blades. The only animal that would have the strength to do this much damage in a giant armadillo is a puma.

“I cannot begin to express how upset we all are. Alex had taught us so much and we still had so much to learn from him. His life and interactions with his mother had been carefully documented. He showed us that parental care in giant armadillos was much longer than ever imagined. Pictures of him and his mother playing revealed a whole new side of giant armadillos.

“What an amazing ambassador for his species. Alex will be missed by the whole team.

“Through his death we realized once again how hard it is for these rare ancient creatures to survive. This is the second birth we have followed. Both ended tragically.

“These events highlight the importance of long term studies to help us understand and conserve these magnificent creatures. There is so much more we need to learn and we are very grateful for all the insights we have been able to make thanks to Alex. Sorry not to have better news to share-but this is all part of the journey. Better news in the next update.”