As the Bornean dry season mercifully comes to an end, we return to the heroes of the Borneo Nature Foundation’s firefighting programme defending the island’s forests from an ashen fate.

Three months ago, we told the story of front line firefighters attempting to protect human communities and wildlife in Sebangau National Park, Borneo, from the advance of peat fires.

Since then the heads of the world have turned towards Australia, where bushfires at the peak of the continental summer have affected the habitat of more than 100 threatened species (Guardian). Sebangau is itself home to an incredible diversity of life, including precious habitat for critically endangered Bornean orang-utan.

It would be easy to assume that in recent months the Sebangau forests may be left with the same scars, despite the protection of the Borneo Nature Foundation (BNF) and its firefighting communities. This is not a disaster story.

You’d be forgiven for thinking otherwise. The statistics suggest the opposite. Global Forest Watch reports the detection of 87,692 fire hotspots in Indonesia last year by the MODIS satellite system, the worst since the disastrous dry season of 2015. Another harsh 2019 dry season and the return of El Niño conditions have together generated ideal conditions for dry peat burning. 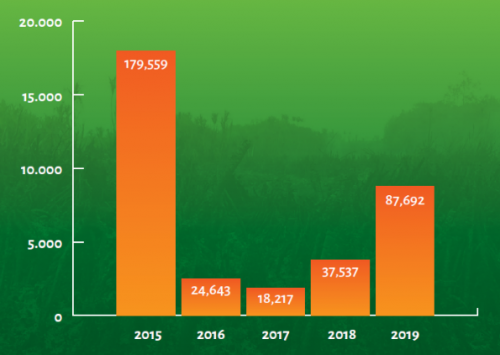 298 of these fire hotspots were detected within the National Park Boundary, and yet… as of early January 2020, every single incidence of forest fire in a 50,000 ha area of land protected for science and research has been successfully contained.

Four fire-fighting teams consisting of more than 126 people – fire-fighters, local community members and Borneo Nature Foundation field assistants saw action together against the fire’s spread. A careful strategy led daily action: patrolling by river, installing bores, and fighting active blazes. Twenty-four major blazes were suppressed in their entirety by the teams in total. As a result, zero forest was lost within the 50,000 heactacre’s of land that BNF works to protect.

Last year, it was your generous donations in the wake of the Monsoon Forest Fire that generated £30,000 of support for this bravery on the ground.

With the wet season rains now blanketing the region, there is a brief chance to recover and repair. The heroics and hard work of these individuals year on year will only be necessary in the short-term. BNF and the communities of Sebangau are actively working to restore the habitat and prevent fires – the long-term solution.

The continuous damage to the forest’s peatland by illegal logging canals dug decades ago must first be rectified. BNF are collaborating with CIMTROP (Centre for International Cooperation in Sustainable Management of Tropical Peatland) at the University of Palangka Raya to build dams in the now unused illegal canals. Research shows the work is already having a positive impact, slowing the water discharge and maintaining the ground water table as the dry season approaches. Fire is only able to tunnel through the ground when the peatland has been left dry without its water.

Alongside this work, it is the human angle that will make the greatest difference in the end. BNF seeks to fully understand the socio-ecological context within which fires occur, and address the various socio-economic and political challenges facing peat-swamp forest conversion. Poverty, farming and fishing strategies all play a role in fire incidence, and tackling these will be essential for a long-term future as the advance of climate change continues.

Find out more about the Borneo Nature Foundation