After an incredible summer celebrating the Olympics in Tokyo, here in Britain the British & Irish Association of Zoos & Aquariums are handing out gold, silver and bronze to some of the very best projects among zoo conservation in their annual awards.

It’s been another GREAT year for the zoo with 9 awards under our belt in 2021….

Check out our award-winning projects!

How do revitalize an ageing population of fish who have seemingly left their breeding years more than a decade ago? With modern science of course.

The Omani blind cave fish inhabits the waters of Oman in the middle east, with an unassuming looking surface-dwelling morph, and a far more unusual blind and depigmented morph adapted by the fish for lives deep in aquatic caves far away from sunlight’s reach.

72 individuals were brought from the wild to Chester Zoo in 2003, with the hope of establishing a breeding population should they become extinct in the wild, but breeding them proved a mighty challenge. Despite initial successes and our efforts to replicate what little we know about their breeding conditions in the wild, by 2018 only geriatric fish remained.

Following research advancements in breeding techniques at Vienna Zoo, our veterinary team and aquatics keepers trialled a new hormone treatment on our elderly fish, to great success! Within days the treated population were engaging in courtship behaviour, and together produced an incredible 751 tiny cavefish fry. Such a number is enough to sustain our population for at least the next decade, and establish new cavefish groups in collections across the UK, all without the need of removing fish from the wild population.

Long-term behavioural welfare monitoring makes up a core part of any modern zoo’s efforts to maintain thriving animal populations, and over the last few years we’ve been putting extra focus onto our Asiatic lions.

Working side by side, our keepers, mammal curators and behaviour & welfare scientists have been investigating how management changes in the zoo affect key markers in our lion’s behaviour. We’ve designed an accessible toolkit for carrying out evidence-based lion management for anyone involved in lion conservation to use, as we continue research as to how best to care for this Endangered and charismatic animal.

Check out the publications that contributed to this award:

Journal of Zoo and Aquarium Research

Journal of Zoological and Botanical Gardens

Over in the Philippines the theme in 2020 has been work to restore rich and diverse ecosystems focused around the “Visayan Big 5”: Visayan warty pig, Visayan spotted deer, Rufous-headed hornbill, Visayan hornbill, and Negros bleeding heart dove.

Last year saw the reintroduction of the two mammal species for the first time, to the Danapa Nature Reserve protected area on Negros, and we’ve been pleased to see in the months since a stream of camera trap imagery showing Visayan warty pig and Philippine spotted deer adapting to their new home. Work is led on the ground by the Talarak Foundation, one of our longest standing conservation partners, where we have supported the conservation breeding of these species, culminating in these reintroductions.

From these first reintroductions we’ll learn just what effect the reintroduced species have on the surrounding ecosystem, and how best to carry out ecosystem restoration across the Negros in the years ahead.

Plant Prodigy Joshua Styles is continuously busy on his quest to save plant species and restore rich ecosystems across the North West. This Gold Award is testament to the extraordinary achievements of 2020 despite disruption and challenges brought about by the pandemic.

We covered Josh’s 2020 adventures earlier this year. Take a peak at his story of growing a carnivorous plant population from just 60 plants to 200,000.

Back in 2018, the government of Indonesia added many new species of reptile and amphibian to their list of species prohibited from being owned as pets. It was a great step for conservation, but brought the challenge of an influx of species arriving in the care of the nation’s wildlife rescue centres, which have struggled under limited capacity to meet the husbandry needs.

In response, we journeyed out to Indonesia work the Cikananga Wildlife Centre and the Indonesia Herpetofauna Foundation in delivering the first ever amphibian and reptile management workshop designed for those working newly confiscated species. 28 participants from 14 different wildlife institutions received training in skills of identifying, handling, restraining, transporting, maintaining, and providing medical treatment for an assortment of reptiles and amphibian species, ultimately helping to improve welfare and survival rates of protected species following confiscation or rescue.

Indonesia is a hotspot for the trade in birds. 36 million homes on the most populous Indonesian island, Java, are home to an estimated 70 million cage birds. The trade is deeply culturally linked and hugely complex, and yet the enormous pressure it places on wild songbirds must be addressed.

CZ Conservation Scholar and Manchester Metropolitan University Graduate Dr Harry Marshall has spent the last 4 years on a PhD journey supervised by Dr Stuart Marsden and Dr Andrew Moss (pictured) to uncover the root of the songbird trade and how we might begin to increase it’s sustainability.

BIAZA recognises zoo exhibits that combine the highest standards of husbandry and welfare while offering an educational experience to visitors. This year it’s our latest development, the Madagascar area, home to 5 different species of lemur, some of the most threatened mammals on Earth.

Our Madagascar area draws inspiration from typical Malagasy rural architecture and landscapes, helping to immerse every visitor in the ecosystem and allow the lemur residents to engage in natural behaviours. Alongside that, an assortment of signage and interactives share the story of our long partnership with NGO Madagasikara Voakajy in Madagascar’s Mangabe Protected Area. With the conservation status for lemurs being so dangerous at the present day, it’s crucial with lead successful breeding programmes whilst inspiring visitors to support wildlife conservation in a number of accessible ways, and it’s through top level habitat design that we make this a reality.

The Bermuda skink – found only on the west-atlantic island for which it’s named – has been a focus of CZ conservation not just in 2020 but in the 5 years prior. The rush has been on to understand everything we can about the skink since its dangerous conservation status was realised, and so we’ve been working with the Bermudan government and the University of Kent to build a conservation strategy for the years ahead.

Using the ‘One Plan’ approach, combining research both in zoos and in the field, we’ve made huge strides. We’ve captured never-before seen images of Bermuda skink courtship, reproduction, and general day-to-day behaviour in our controlled habitats here at CZ, meanwhile, surveys in the wild have identified and surveyed the remaining populations, found almost entirely on tiny islets surrounding Bermuda, where the reptiles are safe from introduced mammal predators. We’re far from finished yet, and will continue research and breeding into the years ahead, working closely with the incredible students that have completed Master’s degrees and PhD’s as part of this project.

Although this species has been maintained in ex-situ collections before elsewhere in the world, Mexican leaf frogs were not present within BIAZA and EAZA collections until arriving here at Chester. In the wild, the breeding cycle of this species is highly intermittent, coinciding with seasonal rains and the formation of temporary ponds, although daytime temperatures remain high and can rise to 40°C or higher. The frogs then spawn onto branches or vegetation that overhang these ponds, and eventually tadpoles drop down into the water to continue their rapid development before the temporary ponds dry out.

Larval development is speedy, with eggs developing and hatching in just five days, and metamorphosis within just five weeks of development. Breeding efforts here at CZ resulted in the birth of one hundred ex-situ bred Mexican leaf frogs, which have been sent to BIAZA zoos and educational facilities across the UK. 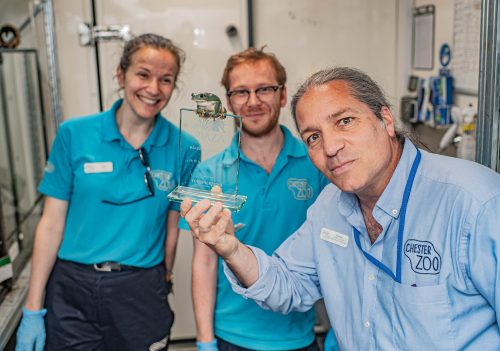 Zoos like ours are conservation powerhouses. Our Conservation Masterplan for Chester Zoo aims to build on our success and sets out a road map for the delivery of our mission of PREVENTING EXTINCTION through close integration of our many different types of conservation work.

Take the first step into a career in conservation with our upcoming Careers Festival!