With our partners in Madagascar, we’re raising the next generation of conservationists to ensure the long-term survival of endangered lemurs.

Habitat degradation and hunting for bushmeat have been immense pressures on Madagascar’s diverse collection of endemic lemur species in recent years. With many of the 110 species present on the island in decline to the point of their classification as Critically Endangered by the IUCN, it is essential that we explore all possible approaches to prevent their extinction.

A female indri pictured here with her baby is one of the critically endangered lemur species that calls the Mangabe New Protected Area home.

The Mangabe New Protected Area was created in 2015 as a safe-haven for nine species of lemur among other endangered species across many animal groups. Managed by our partner Malagasy NGO Madagasikara Voakajy, we are supporting them in their amazing efforts to conserve the endemic lemur populations.

The approval and active involvement of the communities living within a conservation project area, in the projects being enacted there, are paramount to success. To reach Madagasikara Voakajy’s ultimate goal of leaving the management of Managabe solely in the hands of those that live there by 2040, they have been working since their inception to provide local communities with the tools and skills to carry out conservation, and spread awareness of the value of conservation within these communities. 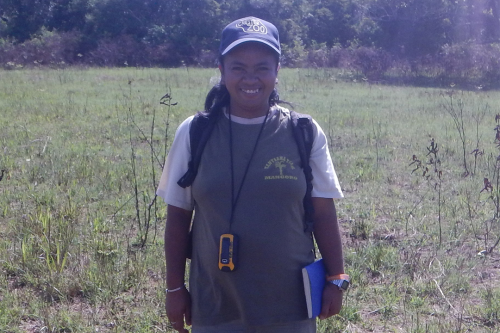 Youths in rural Madagascar, and particularly in the Mangabe protected area, seem to be doomed to become farmers practising unsustainable slash-and-burn agriculture and hunting. This fate is due to the lack of access to a good education and employment opportunities in their small and relatively isolated villages.

In 2016-17, we began to run a project aiming to reverse this situation and make youths ‘lemur conservation ambassadors’. The project was designed as a contest between youth teams of Mangabe, with three main areas:

The youths were trained in these areas and their progress was monitored. By December 2017, 45 youths in seven teams were established in the Mangabe Protected Area, and have successfully adopted a sustainable rice farming technique.

Other community members soon followed their examples. These young people delivered more than 300 awareness sessions to 3,000 people, stressing the importance of lemur conservation.

From 2018 onward, the teams continued to run awareness campaigns in their villages and were involved in decision making by local authorities. In addition, two new teams were created entirely independently of Madagasikara Voakajy involvement, due to the dissemination of information and the conviction of youths to protect lemurs.

Last December’s Chester Zoo expedition to the Mangabe New Protected Area saw some of our team meet with the dedicated 15-25 year olds that make up the programme.
This programme has provided the tools and the knowledge to the youth of Mangabe to begin their work as conservation ambassadors in the years to come. But what about the future? Voahirana told us about the importance of the project, and her hopes:

“Through the Youth for Lemurs programme, I strongly believe in the power of youths to bring changes and their critical role in conserving (or depleting) the unique biodiversity of Madagascar. This approach should therefore be reinforced, adapted and replicated at all important biodiversity areas in the country.

“In the coming few years, I hope that young emerging leaders will stimulate the social dynamics of communities in and around Mangabe, inspiring all members of the community towards sustainable development. I hope that no signs of hunting will be observed within the protected area in the coming years, and that the Mangabe Protected Area forest cover will be maintained at over 9,000 hectares.”

Communities in Mangabe are working for the future safeguarding of the environment which is their home. You too can get involved in protecting the nature around you.

Find out more about our projects in Madagascar