The black crowned crane, found in various regions of East and West Africa is of global conservation concern. Both subspecies, the West African Crowned Crane and the Sudan Crowned Crane, have undergone dramatic population declines.

Thought originally to occur in over 27 African countries, the species has now been restricted to roughly eight isolated populations. The West African crowned crane in particular has undergone such drastic population declines that in Nigeria, where the species is still considered the national bird, no more than a few individuals are left of the population that in the 1970s was in excess of 15,000 birds. 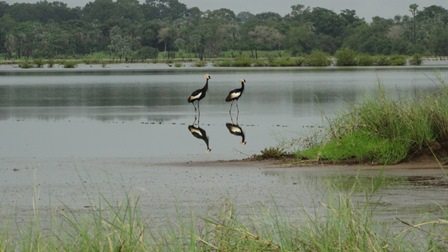 Chester Zoo has a long history of support for the Conservation of Black Crowned Cranes in West Africa project. The project’s main aims are to better understand the species’ habitat usage, distribution, nesting behaviours and instigation of a better future management plan. Along with these investigations, the project also engages local communities and helps to raise awareness of the importance of these beautiful animals.

In 2001, the zoo supported preliminary surveys of the bird in the Casamance (the area of Senegal south of the Gambia including the Casamance River), conducted by Wetlands International.

These surveys estimated 940 birds in the five regions of the Casamance. The 2013 updates indicated that the most serious on-going threat to cranes in this region appears to be continuous changing habitat. In essence, the freshwater wetlands that are such important breeding sites for these birds are increasing in salinity and becoming unsuitable breeding sites. This was not necessarily the case for all other sites surveyed as the project is run in several West African countries simultaneously.

In the Casamance, the bird is greatly respected and highly regarded amongst local people, however, in other regions such as small villages in Guinea-Bissau traditions exist that may be detrimental to the survival of the species; for example if a hunter sees more than one crane, he must kill all or none, or else the other cranes will bring revenge to the village. For this reason, community engagement, education and awareness is just as important as habitat preservation for the survival of these birds.

Most recently, there have been reports surfacing from recent monitoring of the species, of population stabilisation and increases in certain areas of West Africa. Chester Zoo continues to provide financial input and support to this important project and we look forward to more good news emerging as the project continues.

The conservation of black crowned cranes in West Africa is an ongoing project, with community education and involvement in the conservation of these animals a major component in the success of the project, something that Chester Zoo also provides support for, along with other partners involved in the project. Stay tuned for further information about this project in blogs to come!