Since 2016, conservation scientists from Chester Zoo, PROMETA and the University of Oxford WildCRU have been working to facilitate human-bear coexistence through poverty reduction in Bolivia.

The inter-Andean dry forests inhabited by the threatened Andean bear are also home to some of the poorest and most vulnerable communities in Bolivia. These ecosystems are highly vulnerable to the effects of climate change, and in recent years have suffered severe droughts. With arable farming rapidly becoming inviable, people are increasingly switching their main economic activities from crop growing to cattle ranching. Life for the communities in these regions is extremely challenging, and given that bears are widely considered to be responsible for livestock losses, attitudes towards this species have historically been very negative.

However, thanks to Chester Zoo Conservation Fellow Dr Ximena Velez-Liendo and her team, perceptions of the Andean bear in Bolivia are starting to change. Winning a prestigious Whitley Award in 2017 helped her to gain political momentum, and she has since worked closely with the Bolivian government to put a National Andean Bear Action Plan into place. Excitingly, the species has now also been declared as a natural heritage species in the project’s focal province of Tarija. 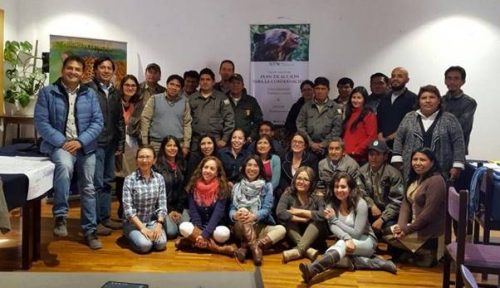 Although Andean bears have been anecdotally reported to occur in Tarija, prior to initiation of the project there had been no verified records since 2010. In order to confirm the bears’ presence, Ximena and her team set up a network of 55 camera trap stations across more than 700 square kilometres of dry forest. These cameras have not only confirmed the presence of bears in the area, but also enabled identification of 19 different individuals based on unique markings on the face and chest. As well as informing us about the number of bears in Tarija, these surveys are revealing aspects of Andean bear ecology that are important to managing human-bear conflict, such as seasonality of activity – with bears mostly using the area in the rainy season between October and May. More than 45 mammal species, 20 reptile species and 96 bird species have also been recorded, with photo sheets provided to all communities to help build connections with the wildlife on their doorstep.

Alongside ecological surveys, Ximena has been working closely with local communities to identify context-appropriate alternative livelihoods that could help to alleviate poverty and improve both community and ecosystem health. A series of comprehensive consultations indicated that beekeeping was strongly favoured as an economic alternative based on significant demand in local markets, low physical effort when compared with cattle ranching, and year-round output. In the past year, beekeeping training workshops have therefore been held in six communities. The project has now supported the installation of five community apiaries incorporating 46 beehives, which are expected to deliver more than 1.8 tonnes of honey in 2020. In addition, members of the groups trained by the project have already worked independently to install a further 18 beehives on their own land. 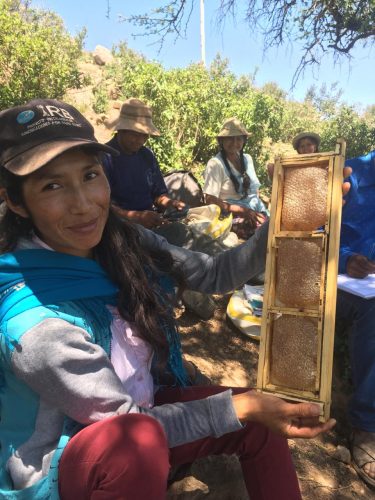 “Working with people is challenging, sometimes even more challenging than capturing and collaring a bear, but the satisfaction of seeing this conservation project working – hearing people saying ‘at first, I didn’t believe in you and your bears, now I see I was wrong Dona Ximena’ whilst holding their first honeycomb, and monitoring bears in the wild – not only makes me happy, but reinforces my commitment to this initiative, to keep working with people.”

Over the coming year, the project will be supporting communities to commercialise their beekeeping activities, and is currently in the process of registering a brand for products sold under the new economic initiatives. Our education specialists at Chester Zoo will also be assisting in developing a schools’ outreach programme, and our Botany & Horticulture team will be helping to develop supplementary capacity-building activities for growing lavender to support the apiaries. We look forward to sharing further updates as the project progresses.