How to catch a dragon 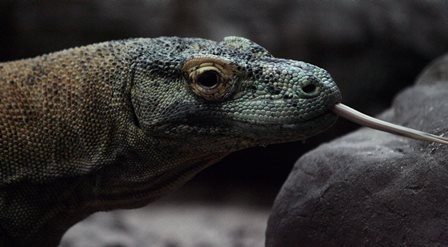 This animal is just one of the many species Chester Zoo keeper, Matt Cook, works with at the zoo. He travelled to Indonesia to work with the Komodo Survival Program (KSP), using his skills and experience of working with this animal, to help with their study of wild komodo dragons.

The role of the KSP is to monitor the dragon populations, collect data to improve our knowledge and to educate local communities on the species. The conservation of these giant reptiles and their habitat is of course the main aim of the project.

Below Matt tells us more about his trip:

Chester Zoo, along with many other EAZA institutes supports the funding of the Komodo Survival Program through the European Endangered Species Programme (EEP). Without such support this conservation project would not be able to function.

“The Komodo dragon is truly unique among reptiles. The juveniles bare a close resemblance to their closest living relatives in the Varanus genus but the adults with their sheer mass and remarkable feeding ecology sets them apart from all other monitor lizards. The largest lizard in the world with a deadly bite label gives them global recognition. This being said there is much conservation significance with this species.

“They are currently listed on the IUCN Red List as ‘vulnerable’. The threats are familiar in regards to many other species including habitat loss, poaching of prey items and conflict with humans.

“My trip took me to a very remote location to observe and assist catching Komodo dragons. The dragons are found on a small group of islands in Indonesia. This program was situated in Riung, Flores where the dragons have been poorly studied and the population is not well known at all. One of the aims of this project is to fill in gaps such as these.

“The method used to initiate the population survey, once suitable habitat has been determined is to set up camera traps. These devices strapped to trees are supported in their chances of catching dragon on film by meat baited nearby to lure the keen scented dragons.

“The second stage was to set up live traps to catch the dragons. The dragon trap is a metal crate structure, 3m long and weighs 30kg to cater for the largest lizard in the world. The trap splits into three parts for transportation purposes. Each segment is fitted with a harness and me and the team would carry them in the same manner as carrying a rucksack. This is the most physically demanding aspect of the field work. The trap is not particularly light and quite bulky. 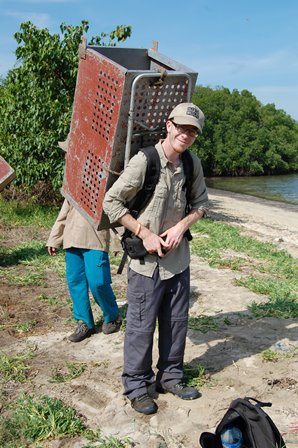 “Komodo dragon habitat consists of savannah and forest. The forest presents the problem of snagging and tripping in the dense foliage. The hilly savannah is fully exposed to the hot sun. The traps are assembled in the shaded forest and baited with meat. They are then checked twice a day for curious dragons!

“Successful traps offer a Komodo dragon ready for data collection to support research of the species. The data includes measurements, weight and blood sample collection for genetics. Each Dragon is also micro chipped to be catalogued for population study.

“The dragons of Riung were discovered to be much smaller than the ones living on Komodo Island. The prey population survey completed suggested no large food items such as deer or buffalo at all. The actual prey is not fully known but smaller dragons means smaller prey. This unstudied dwarf population awaits much more research and ecological study in the near future.

“The trip to Riung caught 11 different dragons (plus re-captures) in a week of trapping. This suggests a good population. However, this land currently has no legal protection. The Komodo Survival Program supported by Chester Zoo is currently working towards securing land protection whilst supporting the local communities.”

We’re also working on a three-year-long survey which is currently in its second year. The research project aims to discover whether there are any other Komodo dragon populations on the island of Flores that we don’t yet know about. Our findings will hopefully enable us to then establish more National Parks in order to protect the species on the island, as well as the other wildlife that live in the area. Watch this space for more updates on this work or sign up to our monthly Act for Wildlife e-newsletter for news straight to your inbox!