Lucy Edwards, lead keeper of the twilight team at Chester Zoo, has recently visited a conservation project in Peru that is working to protect the beautiful Andean bear – also known as the spectacled bear. Through Chester Zoo’s support, the Spectacled Bear Conservation Peru have been able to purchase vitally important camera traps to continue their research on wild spectacled bears. The project is based in the dry forest on the foothills of the Andes in northern Peru.

Lucy tells us more about her trip: 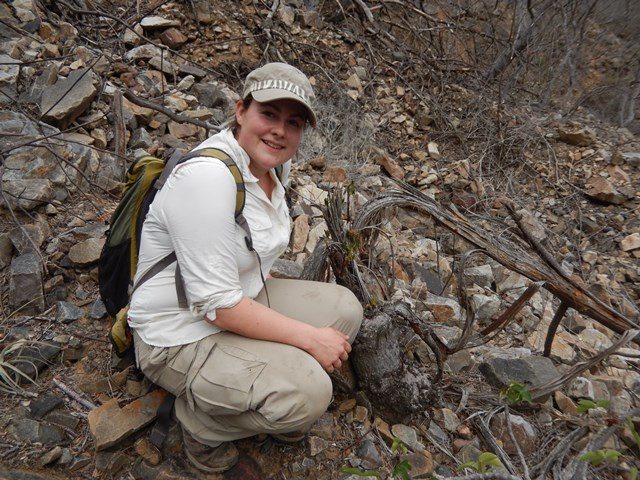 Lucy Edwards out in the field, in Peru

“I have worked at Chester Zoo for four years and have always wanted to work with bears so when I got the opportunity to work with the spectacled bears on twilight section I jumped at the chance. They are my favourite animal – they are so beautiful and unique, as even though they are classed as carnivores they almost completely herbivorous and their vocalisations, such as trilling and humming are wonderful.

“My favourite part of working with the bears is trying to come up with lots of different ways of providing environmental enrichment to keep them both mentally and physically stimulated. I was also very excited to receive our two new bears Bernardo and Lima last year as they will form a breeding pair as part of an international breeding programme in the near future.

“Spectacled bears are the least researched of all the eight species of bears so it is fantastic that the zoo is supporting the Spectacled Bear Conservation Peru project. I was able to go out to Peru and visit the project. The purpose of the trip being to see what work is being carried out and how the zoos support is helping. 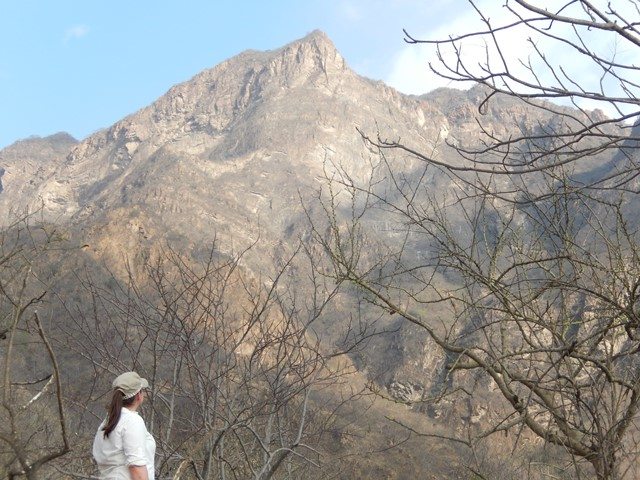 Lucy looking out at the magnificent surroundings

The thing I was most looking forward to on my trip was the chance of seeing a wild spectacled bear in its natural habitat but I knew there was only a very slim chance of seeing one as they are incredibly elusive and notoriously difficult to find.

“The following day after hiking for 3 hours ½ hours up a mountain in 35°C Javier, Jose (2 of the researchers) and I reached a water hole. We settled down and got comfortable, well as comfortable as possible on a floor of rocks, in a hide above the water hole.

“Approximately 10 minutes after we arrived we heard the echoing sound of rocks falling high up on the mountain. The bears were awake! Shortly after this, far in the distance a tiny black spec was visible on the opposite mountain moving down a trail. I reached for my binoculars to discover it was a bear on its way to the water hole.

“Excited does not even come close to how I was feeling but I remained completely still and quiet and waited patiently hoping that the bear would approach. About 10 minutes later Javier whispered ‘Oso’, which means bear in Spanish. Through the many trees I could see a black shape approaching and to my complete surprise a two year old female cub walked right in front of us looking at all three of us as she passed by and without a care she began to drink. I was terrified of making any noise!

“A second, slightly larger bear approached the water hole but only stayed momentarily. Just as my second sighting was beginning to sink in a third bear, the mother of the two year old cub climbed up the rocky terrain towards us. She sniffed around and watched us for a few seconds then casually carried on past us. She had beautiful spectacle markings (the feature which gives this species its name). I couldn’t believe I had already seen three wild bears and it was only 6.30am on my first day in the field. The sun wasn’t even up yet! Suddenly the difficult hike up the mountain was all worth it. 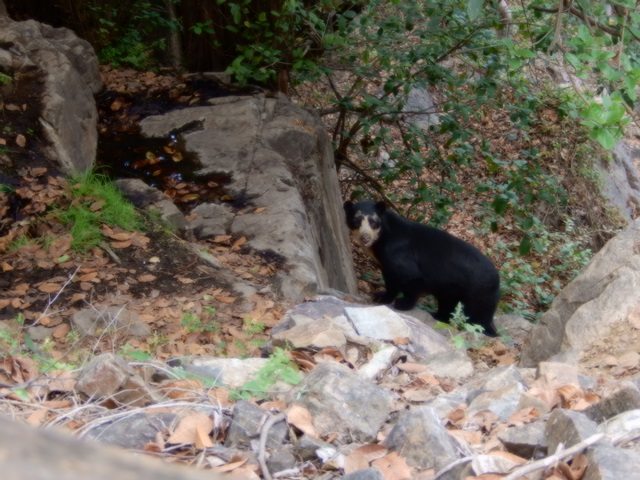 Close encounters with a spectacled bear

Bears always follow the same trails; it’s how they find their way around. We have noticed our bears at the zoo like to do the same. Once the camera was fitted we needed to test which basically involved crawling down the trail on our hands and knees and seeing if the camera was activated.

“After walking back down the mountain to the camp we decided to check the other side of the mountain for any bear activity. This time we stayed in the valley at the bottom and searched the cliffs for black specs. After my good luck in the morning I didn’t expect to see much more but amazingly after a short while there was a bear, a large male walking along the cliff at some pace. Just above him another bear! The male was pursuing a female (mating season occurs at different times of the year in the southern hemisphere, here at the zoo the bears often mate in May/June). I peered through my binoculars to see the bear’s courtship behaviour (neck biting and pawing each other) then they mated. Only in this area of Northern Peru can spectacled bear behaviour be witnessed first-hand like this due to the open terrain and arid environment. Seeing mating behaviour is a very rare site even for the researchers so I was incredibly grateful to be able to be there at that time.

“I settled down for my first night in the field and aside from the scorpions and all the bugs it was quite comfortable.

“The following day we walked to the other side of the mountain again but this time crossed the valley and climbed a short way up the opposite mountain where we could look for bears. Before we had even reached our destination Javier whispered ‘Oso’ again – my new favourite word. We sat on some rocks and watched through our binoculars as the male from last night was still pursuing the female. This time however the female was accompanied by her 2 year old cub. As the male closed in, the cub retreated to a nearby cave and the pair came together.

“During the hottest part of the day all we could do was sleep but I’m always up for a nap so that was fine by me.

“Later that afternoon two small bears could be seen low down on the mountain feeding on sapote fruit. Sapote fruit is vitally important to spectacled bears in this area as it enables them to put on enough weight to survive the rest of the year when there is very little food available. This was thought to be the female cub and her sibling. That brought my total bear siting count up to five but that was the end of my luck as they were the last bears I saw.

“After five days in the field we returned to the conservation centre in Batan Grande. Here I met the local women who make hand felted products to raise money for the project. I got the chance to make my own spectacled bear which I modelled on Franka (one of our bears at Chester Zoo). Admittedly it was not quite the standard they were used to but it made a nice souvenir. 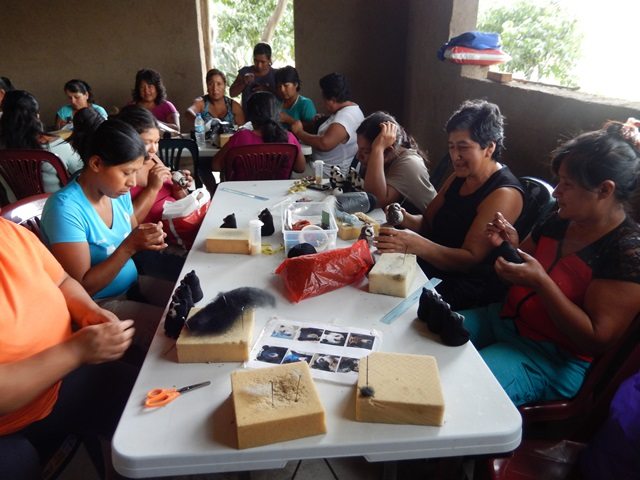 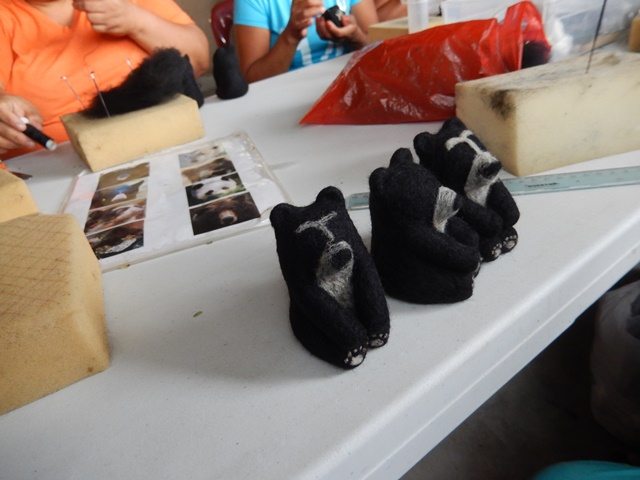 “The rest of my trip was spent visiting some of the other areas where the researchers observe the bears and the area the project is hoping to expand the research into. This area was beautiful as all the trees and cliffs were covered in bromeliads. It reminded me of Paradise falls from the Pixar film ‘Up’.

“Whilst seeing the bears in their natural habitat in Peru I realised just how adaptable this species must be to survive. It also inspired me to try out some more enrichment ideas to challenge our bears at the zoo.” 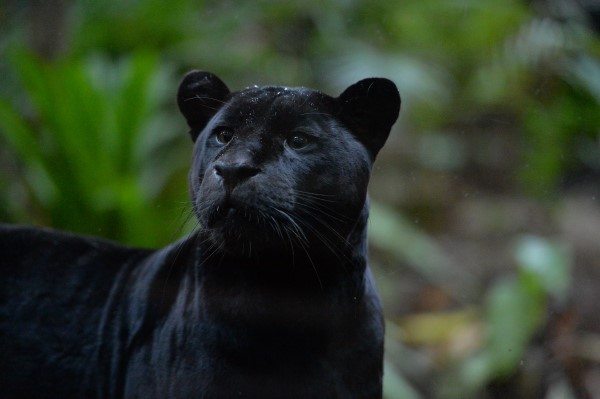 Donate now and 100% of your money will be used to help save wildlife in Latin America.