The species is endemic to the island of Java and is currently listed as endangered by the International Union for Conservation of Nature (IUCN). The species isn’t protected by Indonesian law and, sadly, its population is believed to have decreased by 50% in just over 20 years (from 1982 to 2004). It’s unclear how many still exist today and exactly where they are on the island.

As their natural habitat declines, pigs are venturing out of forests in the search for food; wandering into agricultural fields and destroying people’s crops. This has resulted in local people hunting the pigs in order to protect their produce. 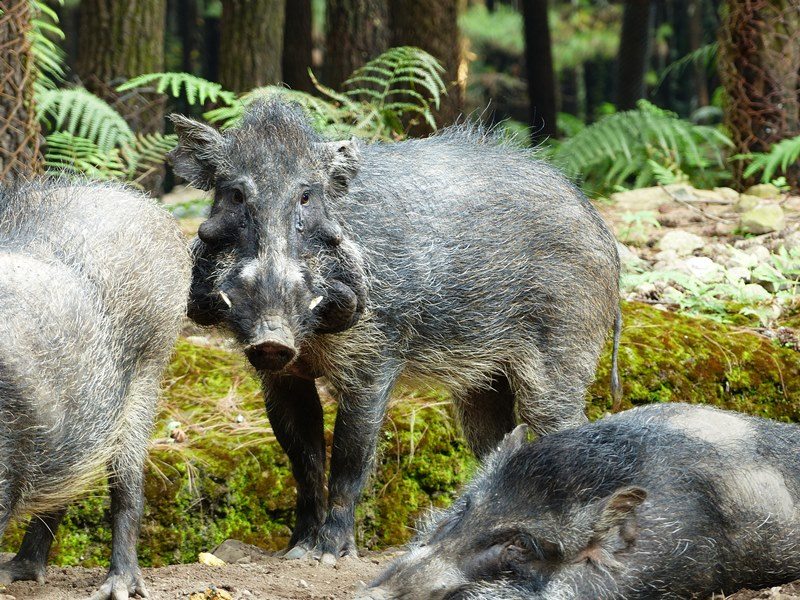 Jenny Brownlie, currently in her third year of studying a masters degree in social anthropology and development, had the amazing opportunity to join our Indonesian field researcher, Shafia Zahra, in Java to support her with some of the initial research for the project.

Jenny supported Shafia on the first of five planned camera trap surveys which aim to find evidence of the last remaining wild population of Javan warty pig. Jenny tells us more about her field trip:

“As a social anthropology student, my own academic life is focused on people and the lives they lead. However, to interact with a culture so different to my own, even if through animals, was not something to be turned down!

“Having never done fieldwork before in the UK, jumping straight into fieldwork in Indonesia seemed slightly insane to anyone I spoke to. As it got closer to the departure date I began to agree with them. Being of Scottish origin, the thought of five weeks in hot humid Indonesia created two overriding emotions; unbelievable excitement to be in a country so different to my own and the fear of the unknown. 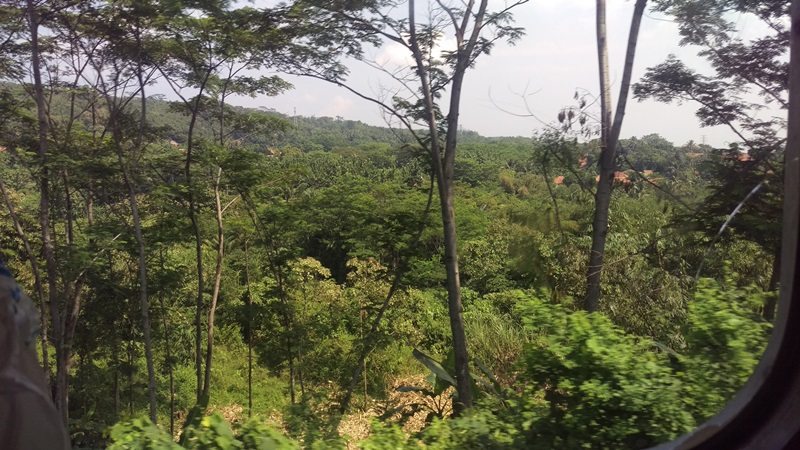 “Although having visited Java on a Scout trip, it was going to be a different experience this time round. Being by myself, rather than surrounded by 30 other Scottish Scouts, wandering my way through customs and baggage claim took less than a quarter of the time. Walking out was exactly the same, leaving an area of air conditioning to the mid-afternoon sun of Jakarta is not something any Scottish person can prepare for. After months of planning and emails sent; I was actually here and ready to begin this new adventure.

“Two days later, the real fun was about to start, kicking off with nine hours on a train. Travelling past the rice paddy fields, villages and occasionally through larger towns was extraordinary. Throughout the journey I think we passed fields at each stage of rice production. 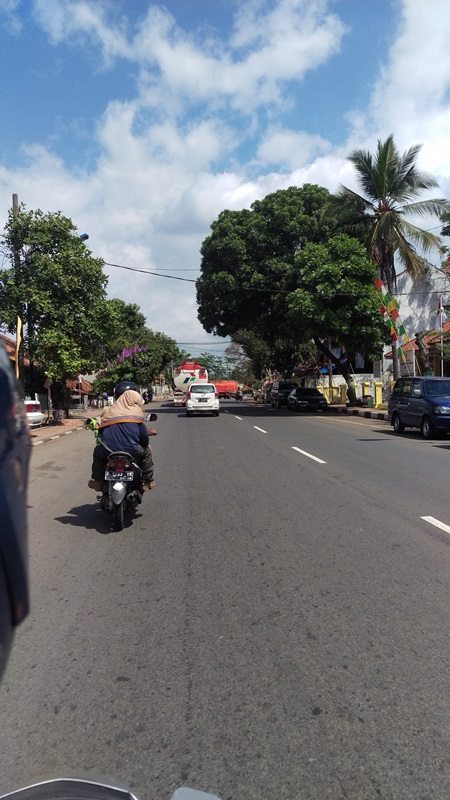 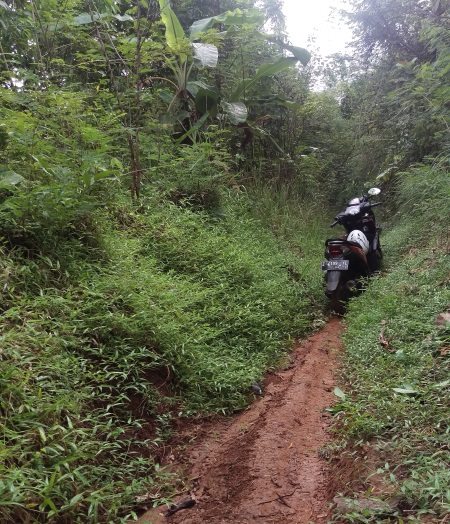 “We arrived in Banjar at what looked like a small village station. Following Shafia  towards some of the bike driven rickshaws  ready and waiting at the station, our kit was loaded up and we headed for the hunter’s lodge. Pulling up outside the lodge I was surprised. I had no clue what to expect of the house itself but the location of it surprised me. Fully expecting to be living in the middle of the jungle with very limited people about I got a bit of a shock when we pulled up outside a house with others squeezed in all around it. For me it looked very similar to the cul-de-sacs that we have in the UK.

“Leaving the village for the rainforest was a mix of emotions. We headed out on scooters to start setting up camera traps. By the time we came to the fifth camera we were forced to leave the scooters beside a small hut and head to the edge of the forest on foot. The hill in front of us was terrifying. The steepness was one thing but the fact the soil was loose and seemed to crumble underfoot did not build much confidence for this being a quick drop off. Watching the hunters climb up the hill with enviable ease I was dead set against falling or sliding back down. I may not be able to climb and walk at the speed that they can in the jungle, but heck was I falling in front of them. 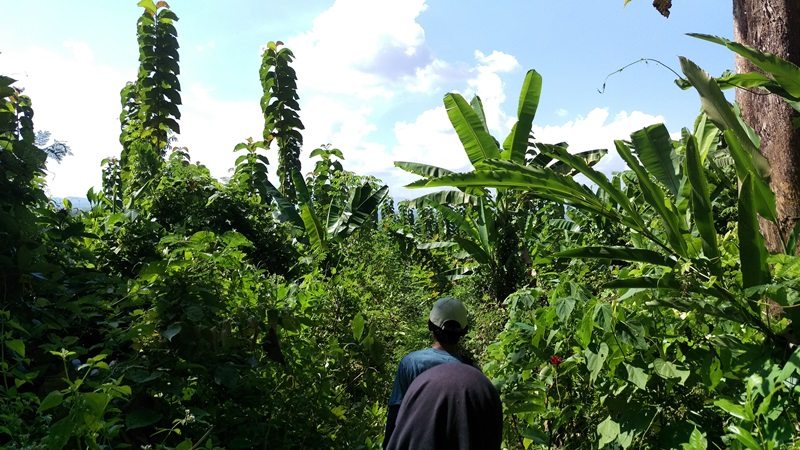 “By far one of the weirdest feelings was during the observation treks. Each week we went on a trek at a different time of the day. For the first week we went out 5pm – 8pm, the second week we went back out and did the same treks but from 9pm – 12am, then for the third we did the treks again but 3am – 6am. Being in the forest at 11pm at night when it is pitch black is bizarre. Yet you didn’t need it to be 11pm for it to be complete darkness. About half an hour after the sun sets at 6pm, it is total darkness. The prolonged but beautiful sunsets that we are used to in the UK aren’t really something that you see in Indonesia.

“For roughly 20 minutes the sky turns that recognisable red-orange but as soon as it arrives, it’s gone. The first night we were there was unimaginable. With a clear sky, the stars were incredible to look at. For the duration of our break half way through the trek, I don’t think I looked away once. My only complaint was the relationship between the sky and my camera. To be able to bring home a view like that and show others was something that I desired so much, yet all six pictures that I attempted did it absolutely no justice in the slightest.

“If anyone ever has any thoughts about visiting Indonesia, real Indonesia, not the bright lights alcohol filled tourist areas; I could not encourage it enough. Even if to only see a country so different from our own you will come away with an experience that will not be forgotten in a hurry. And thanks to Chester Zoo for allowing me to accompany this research.”

We can’t wait to see whether the camera traps find any results! We’ll be sure to keep you posted with any updates from the project, so keep an eye on our blog for more information.